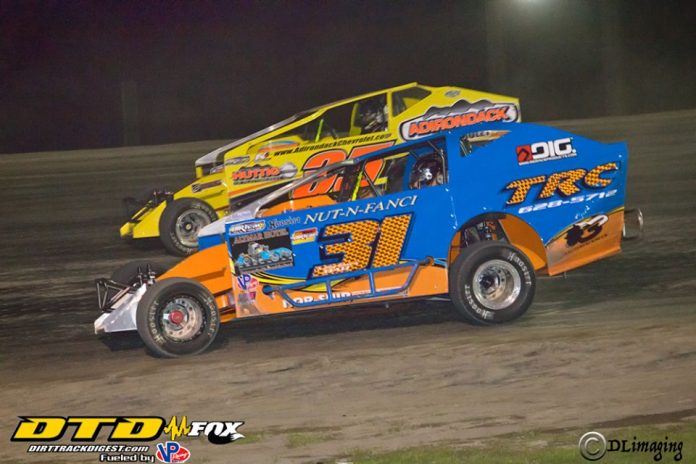 PLATTSBURGH, NY – Lance Willix used the bottom of the race track to his advantage, for his second straight win at the Plattsburgh Airborne Speedway.

Jessey Mueller would wrestle the early race lead away from Jordan McCreadie, and looked like he was on his way to the win using the middle of the race track.

Willix, who started ninth, quickly worked his way up to the second spot, toward the halfway point of the event.

t wouldn’t take long before Willix would use the inside line to grab the race lead from Mueller. He would hold on to that position throughout the remainder of the race, for his second win of 2019.

Defending 2019 champion Steve Bernier would charge up to the runner up position, Mueller would settle for third, Jack Lehner scored back to back top five runs coming home fourth, and Chris Raabe would finish in fifth.

Connor Cleveland would get by Bucko Branham for the lead at around the halfway point, en route to his second win of the 2019 season.

The Corinth N.Y. driver started in the 16th position, and quickly worked his way up through a stellar field of sportsman.

Adam Pierson continued his model of consistency, holding onto the point lead, coming up in the second spot. Branham would finish in third, defending champion Nick Heywood fourth, and Jamy Begor rounding out the top five.

In the Hartson Total Opening Pro Stocks, Jocelyn Roy would pick up his first win at the speedway, passing point leader C.D. Beauchamp.

The two battled side by side for a number of laps, before Roy would grab the advantage on the outside lane with just a few laps to go.

eauchamp would finish in second, Roch Aubin third, Marc Lalonde drove from 11th to fourth, and rounding out the top five was Pascal Payeur.

Jim Mckiernan’s three race win streak is over in the Ernie’s discount tools Super Stocks, as Tylor Terry would win his first race of 2019.

Terry would hold off his brother Josh, in a side by side battle for a number of laps, to score the victory.

The results of this event remain unofficial.

Felix Roy would grab the lead on lap two of the Novice Sportsman feature event, and never looked back picking up his second straight win.

Nathan Smart would hold off a hard charging Josh Laporte, to win his first Chris Frennier Motorsports Strictly Stock feature of the season.

Smart would also pick up the Chris Frennier Motorsports 2 to go bonus.