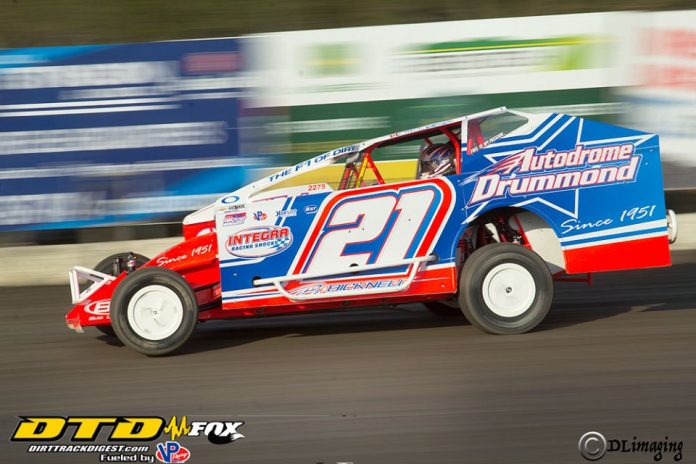 CORNWALL, ON – Cornwall Motor Speedway started with a big night with the Canadian Nationals Modified Series and Race for the Cure Sportsman Series plus the Weekend Warriors Pro-Stock Series sponsored by Gerdau Ameristeel.

JF Corriveau led the way in the 100-lap Fat Les Chip Stand Canadian Nationals when
Mathieu Laramee landed on his roof on lap 1. On the restart, Corriveau remained in the
lead as Yan Bussiere was in second and Corey Wheeler in third. While Corriveau was in
the lead a good battle for third with Steve Bernard and Wheeler as Bernard had the edge
with 20 laps in the books. Corriveau did a good job in front while in lap traffic. Corriveau
got surprised by Bussière in the backstretch on lap 52 and Wheeler was on the heels of
Corriveau for several laps. Both Corriveau and Bussiere battled for the lead as Bussiere
had the advantage with 25 laps to go. Bussiere leading the way as David Hebert
challenged Whitteker for third with 10 laps to go. Bussiere led the final portion to get his
biggest win at Cornwall over Corriveau et Whitteker.


Moise Page took the lead in the Race for the Cure Sportsman Series feature as Robert
Delormier and Jason Shipclark in third. Page still in the lead as many changes in the back
of him as Justin Lalancette made his way to third by lap 25. The red flag waved on the
following lap as Ricky Thompson landed on his roof. Page was in the as a lap 46 restart
was beneficial for Lalancette as he took the lead over Page with Shane Pecore running in
third. Lalancette led the way but Pecore was on his backbumper while Pagé was in third.
Pagé had handling issues and Ryan Stabler took third with 75 laps completed. Pecore
made the move on Lalancette on lap 76 and got the lead over Lalancette. Pecore started to
pull away from the field as Lalancette got challenged from Stabler and Kurtis Cayer.
Lalancette broke something on his car and gave away his spot-on lap 88. Pecore never
looked back and got the feature win over Stabler and Cayer completing the podium.

A very entertaining Weekend Warriors Pro-Stock feature as Dave Bissonnette led the
way but got passed by CD Beauchamp on lap 3. Beauchamp had company in Rock Aubin
at the halfway point while both drivers ran side by side for several laps, they got together
in the backstretch on lap 17 and Beauchamp had to go to rear. Lebrun led the final laps
and got the win

Join us next week as the Lightning Sprints will be in town next Sunday along with a
complete program.