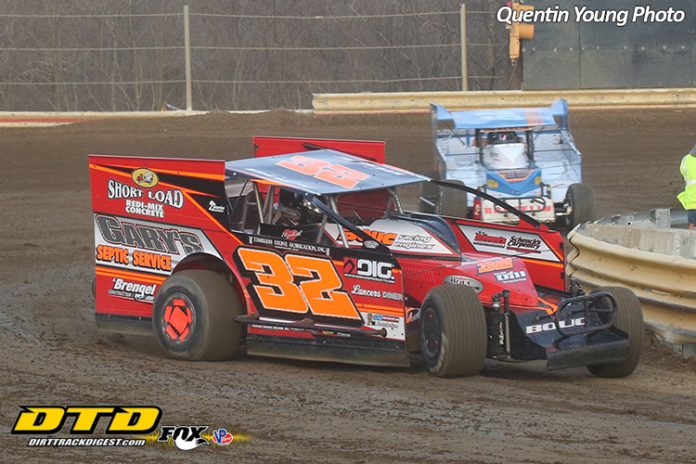 The stars are aligning for an outstanding comeback to New Egypt, headlined by the 40-lap big-block/small-block Modified ‘Dirty Jersey 6’ paying $6,000-plus to the winner, Race No. 4 of the Velocita-USA South Region presented by Design for Vision and Sunglass Central.

Matt Sheppard has been virtually unstoppable in dirt Modified racing of late and has an astounding 10 consecutive victories across the circuit, including two with the STSS at Orange County Fair Speedway in Middletown, N.Y., and Delaware International Speedway in Delmar, Del.

Sheppard leads the stars into the Garden State on Thursday looking to keep his momentum rolling. But the competition will be stiff.

Pennsylvania’s potent ‘Big Three’ contingent will be chasing the 6k payday: Craig Von Dohren in the Dick Biever No. 14s, Duane Howard aboard the Norm Hansell No. 357 and Jeff Strunk with Glenn Hyneman’s No. 126.

Keystone State talent Mike Gular, last year’s champion at Pa.’s Grandview Speedway, has taken his talents on the road this season with Terry Fasnacht’s No. 2A. Gular will be in attendance for the ‘Dirty Jersey’ after a top-five effort at Delaware International Speedway.

Billy Pauch Jr. is on the heels of a win at New Egypt on Saturday night and was the ‘Dirty Jersey’ victor in 2016. Pauch Jr. hopes to defend home turf with the Rick Holsten No. 96.

Rick Laubach won the very first ‘Dirty Jersey’ at New Egypt in 2013 and is a perennial contender at New Egypt for special events. He will be in the field Thursday.

Former New Egypt champion Jimmy Horton will make his return to the speedway in the Halmar International No. 43.

New Yorker Anthony Perrego has already won a series race this season at Pa.’s Port Royal Speedway in dramatic fashion. The Middletown, N.Y., talent hopes to pick up his second STSS triumph of the year on New Jersey soil.

Three-time STSS Halmar International North Region champion Andy Bachetti will make the long haul south from Sheffield, Mass., to New Egypt. Like the STSS, Bachetti hasn’t been in competition at New Egypt since 2006.

Fresh off a big win last Friday at Georgetown (Del.) Speedway, Richie Pratt Jr. and the Danny’s Pizza Pizzazz No. 51 team will be ready to challenge for a $6,000 payday.

Frank Cozze has plans to attend the ‘Dirty Jersey’ with the Dave Renaldo-owned No. 401. The Wind Gap, Pa., driver has 26 career Modified wins at New Egypt.

Joining the STSS Modifieds on the docket are the Capitol Renegade United Racing Club (URC) 360 Sprint Cars in the ‘Turnpike 25’ offering $2,000 to the winner.

STSS Crate 602 Sportsman complete the tripleheader program with Race No. 3 of the South Region offering $1,500 to the winner.

Complete race information can be found at the following link: http://shorttracksuperseries.com/wp- content/uploads/2019/04/DirtyJerseyInformationSheet.pdf