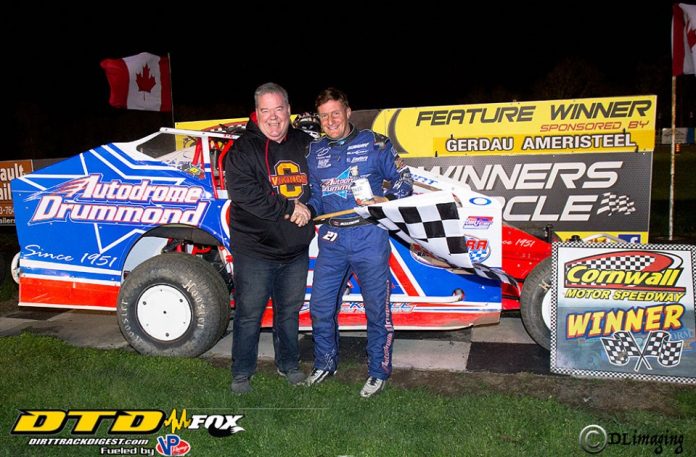 With the 2019 season opener at Cornwall Motor Speedway in the history books, it was a bit of lucky that the race even happened. Race director Joel Doiron explained, “Everyone has been battling Mother Nature this spring and many of the local tracks have missed numerous races due to poor weather conditions and saturated grounds. We are pressing hard to get the season underway in light of severe weather that is approaching later tonight.”

But Mother Nature, in the end, held off giving fans one of the most exciting season openers in some time.

The first round of the Fat Les Chip Stand Canadian Nationals Modified Series was the headline feature event, won by Drummondville’s Yan Bussiere who dueled alongside Jean Corriveau almost the entire race. Lap after lap, the two raced side-by-side, putting on an amazing show of talent for fans.

In the later stages of the race, however, the young hard charging Luke Whitteker in his 38 Special began pressing the two front-runners. But in the last 10 laps, Bussiere took a commanding lead of the race with Corriveau and Whitteker battling for second. In the end, Yan took home the win with Corriveau second, followed by Whitteker in third.

I asked Yan his thoughts on the race and his amazing win: “It was an incredible race. I did not think Jean would press so hard the entire race, as he only has a few years of experience in a Modified compared to the other big guns that were behind him, but he resisted their pressure the entire race. Picking up this win and seeing the leader board displaying 21 – 96 at the end of the race was one of the happiest moments in life for me and to share this victory with my good friend Jean in second place, made this win even more special.” In the 100-lap Race for Cure Sportsman Modified series, Shane Pecore in typical fashion methodically worked his way to his first victory of the season. Pecore, early on in the race, challenged front-runners Justin La Lancette and Moise Page, passing the two hard chargers. Once passed, Pecore sustained his lead, but a late race charge by local racer Ryan Stabler put Pecore into full defense mode. As the laps counted down, Ryan kept pressing hard and with 10 laps to go, was in striking distance to take on the lead. Pecore, a cagy racer, used traffic as an advantage denying any passing move by Stabler. In the end, Pecore crossed the finish line first, with Ryan a close second, and local racer Kurtis Cayer finishing third. All around it was a great win for Pecore, but Stabler really put on a show for fans as he tried his hardest to catch the leader.

Ryan explained: “We came on really strong at the end. I was trying to be patient throughout the race as the track was fast and rough and I wanted to make sure I had a good car for the end. When we got that last restart and there were just fewer than 20 laps to go I decided it was time to show our hand and see what we had. Unfortunately, we may have waited too long, and by the time we cleared a few cars, Shane had quite a good lead. We definitely closed the gap the last 10 laps. But in the end, we ended up with a really good finish and the car in one piece”. In the Pro–Stock feature, Gatineau’s Stephane Lebrun took advantage of a mid-race mishap between race leader C.D. Beauchamp and second place Rock Aubin. Aubin who was trying to take over the lead, got tangled up with Beauchamp, allowing Lebrun to slip down between the two and take the lead. Lebrun went on to win, with Aubin crossing the finish line in a distant second, followed by Dave Seguin in third. It was an ecstatic Nicholas Lamoureux who took home the win in the Min-Stock feature. Lamoureux, who traveled from Maniwaki, Quebec, stated: “We had everything go wrong traveling here. First, we had to fix the car and then we had truck problems during our travels. That’s all in the past now with this win. I’m so happy.”

As the night came to an end the rain came making things difficult on racers to get some of the large haulers out of the saturated grounds. But in the end at least the season is now underway and fans got just a taste of things to come at Cornwall Motor Speedway, 50th celebratory season.

Track owner Raymond Lavergne explained: “I think we got a good turn out and fans were very happy, considering the weather factor. It was raining all around us and we were very lucky to get the whole show in. As for the feature race, I was very happy to see Yan win in Cornwall as his last win at the track was back in 2007 and it’s always nice to see a different winner. I was also very happy for J.F. Corriveau. To see him finish second just capped off the night for me.”

On May 26 schedule is the Co-Operators Lighting Sprints plus a complete regular show.

For a complete listing of this year’s events at Cornwall Motor Speedway, go to https://   www.cornwallspeedway.com/2019-schedule/