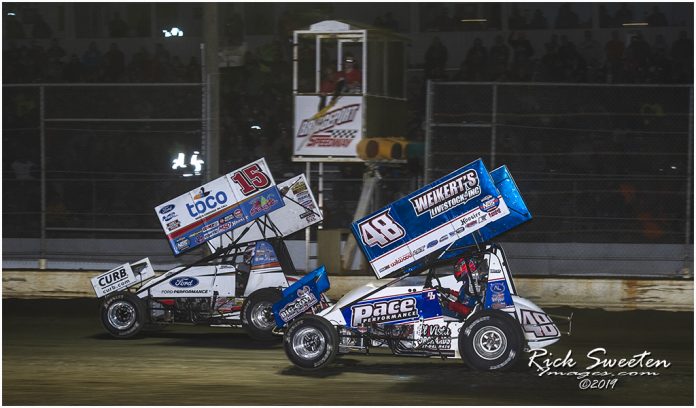 BRIDGEPORT, NJ – Sweat masked Danny Dietrich’s face. His breathing adjusted to the need for an extra pocket of air. His boisterous posture tired, but a smile stayed. The Gettysburg, Pa. native wore the appearance of a lonely diver seconds after surviving a shark attack.

And in his own way, he did.

Dietrich won his fifth World of Outlaws NOS Energy Drink Sprint Car Series victory Tuesday night in the Series’ debut at the 3/8-mile Bridgeport Speedway. To claim it, he fended off attacks by David Gravel, Carson Macedo and 10-time Series champion Donny Schatz – who even stole the lead from him late in the race.

“It was pretty nerve racking,” Dietrich said after the 35-lap Feature.

His night started on a less nerve-cringing note, setting Quick Time in Qualifying – making him the current track record holder for the new 3/8-mile track configuration. From there he went on to finish second in his Drydene Heat race to Schatz and then won the DIRTVision Fast Pass Dash.

His Dash victory lead to concern, though. He and his team discovered an issue with the rear end of their No. 48 car and had to change it. While sweat leaked from Dietrich and his crew, their nerves never faltered. Focused and determined, the Dietrich team, along with help from others were able to replace the car’s rear end in about 15 minutes.

Having a new rear end in the car was of no concern to Dietrich, but the new brakes were.

“We rolled out there (for the Feature), we had new brake pads and rotors. It needed to set the brake pads in a little bit,” Dietrich said. “We didn’t have very good brakes there rolling around before the green flag. They came in. That’s the only thing I was worried about.”

When the green flag flew, all that matter was the throttle. He mashed it, jolting to the lead over second-place Macedo and put several car lengths between them by the end of the first lap.

At the same time, Schatz – who was hungry for a win after getting passed for the win last week – almost found himself off the track on the first lap and fell from third to 10th. He wouldn’t stay there long, though.

At the front, Dietrich enjoyed a clear race track for six laps before catching lap traffic. Behind him, Gravel worked his way by Macedo for second-place and could sense the blood in the water with lap cars slowing Dietrich’s pace. The Watertown, Conn. native looked for déjà vu when lap cars helped him pass Dietrich at Williams Grove Speedway and he went on to win.

Gravel had set himself up to make a pass of Dietrich, finding grip on the bottom of the track, but a caution came out for a car stopped on the front stretch.

When the race went back green, Gravel didn’t let Dietrich pull too far away. Macedo didn’t let the No. 41 car get away either. On Lap 11, Macedo got by the No. 41 car, while Gravel tried to set himself up for another pass on Dietrich. At the same time, Schatz had made his way to fourth-place, steadily making his way back to the front.

For the next two laps Gravel and Macedo traded positions, while Schatz waited for his moment to strike. Macedo eventually won the battle for second-place with seven laps to go. Less than a lap later he was back in third, as Schatz found his way by Gravel and continued the run past Macedo. Next was Dietrich.

With three laps to go, Schatz snuck under the No. 48 car in turns three and four and took the lead.

“Slow down and just be patient,” Dietrich said is what he told himself at that point. “When he passed me, I hit the bottom of (turns) one and two and I just had to slow down and just wait for the moisture. It felt like I was just going so slow, but patients.”

A lap later his patients paid off. Dietrich slid underneath Schatz in turns three and four and fended him off to be the first Series winner on the 3/8-mile configuration of the Bridgeport, NJ track.

Digesting the result back at his hauler, Schatz said he wishes he could have pulled off the win but isn’t hanging his head too low.

“He did a little better job when I got by him and I probably should have used up more of the track a little bit,” Schatz said. “But, hey, it’s racing. There will be another one tomorrow.”

Schatz also continues to hold the points lead over Brad Sweet – extending it to a 36 point lead. Daryn Pittman remains third – 74 points back – and Gravel, who finished third, remains fourth – 80 points back.

“The track was awesome,” Gravel said. “It was really racey. A lot of grooves. Just disappointed I didn’t get my wing back earlier. We had a good enough race car to win. Just got stuck on the bottom a little bit. I should have kept my speed up a little bit more.”

Dietrich had the track figured out all night. Why? How?

“I have no idea,” he said with a chuckle.

Wiping the sweat from his face and regaining a normal breathing pattern, Dietrich just knows he survived the big sharks of the World of Outlaws – a special present on his 31st birthday.