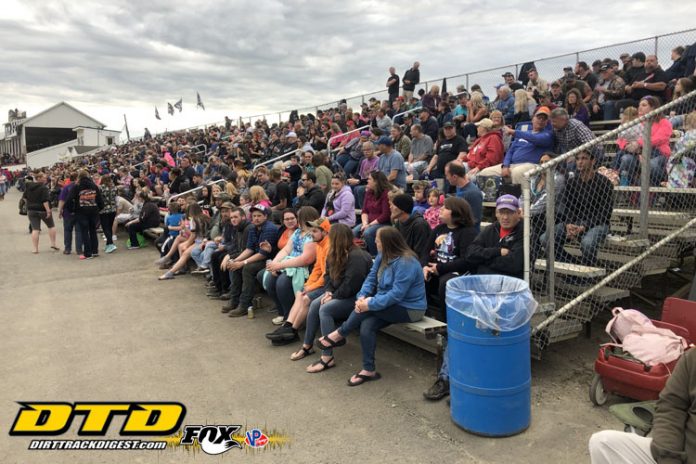 We began our weekend of racing at Albany-Saratoga after going to visitation for former Fonda co-promoter, Seymour Hayes on Friday. It was great to finally see racing without the threat of rain somewhere in the area. The weekend produced some unforgettable moments and great racing. We first ran into Olden Dwyer driver of the No. 88 Modified just as he was coming off his heat run. Alongside was his dad, former driver Ron giving advice as the two talked over what needed to be done. Its Olden’s first time at the track this season and the consensus was that both dad and son were satisfied with his showing so far. They both agreed that the Malta oval was one that made you a better driver because of the competition at the track on Friday nights. We also ran into Malcum Warner and his vintage racer and shot this just as he was about to take to the track for the night. The No. 44 that Malcum runs is reminiscent of his dad, Matt, who ran the No. 44 in the1950’s in and around Schoharie County.

Saturday and Dollar Night so we knew we would need to arrive at Fonda early and we were correct. A little after 3:00 pm the parking lot was well on the way to being full behind the grandstands and the fans never stopped coming until after racing began. It’s hard to describe the feeling of being there and seeing all the people in the stands, it was like stepping back in time. Hats off to Brett Deyo, his staff and anyone that had a part in making the night “one to remember” at the Track of Champions. And the drivers lived up to all the hype, giving the fans, new, regular or vintage, a night of racing that was worthy of the “Track of Champions” title. Tom Lyon of Cobleskill came with his son, Pete and grandson, Tyler, who was there for his first Fonda Speedway experience. Tom came to Fonda for his first time in 1954 with his father. They had been going to a local track, Sharon Springs, near their home and he remembers when his father told him, “We’re going to Fonda tonight because they race in high gear.” Tom has been coming ever since. His son, Pete is a former racer and now the trio looks forward to enjoying their racing together. It’s prom season and it was clearly visible at Fonda on Saturday as Krystal McSpirit (daughter of Chuck) and her date, Jake Bowles posed with Rocky Warner before heading off to the prom. Maybe they brought Rocky his luck for the night. Rocky and prior week’s winners, Brett Mortensen, Tim Hartman, Jr. and Ivan Joslin were greeting fans outside the Fonda Speedway Museum and it made a perfect backdrop for the prom photo. Diane and Don Champion were ready for the nights racing in their usual seats in the grandstand patio area. The Champions are big supports of Fonda and the competitors.
Another big fan of Fonda is Dickie Myers, former sponsor of Andy Romano and Pat Ward racing efforts for many years. Dickie has been troubled with health issues in the past few years and we always love seeing him.

Dana and Devon Camenga are coming to Fonda this season; Dana from Sherburne,
N. Y. and Devon from Troy. Dana is in his No. 110 Limited Sportsman owned by Brett Cross. Devon races in the Pro Stock division in his No. 110. The brothers came to Fonda for the first time with their father, Wade, when they were three and five years old, to see their Uncle Dick Schoonover race. The reason for the No. 110’s, comes from another familiar former racer, Dick Sweet. Dana has been in racing since 2002 when he raced Pure Stocks at Utica Rome before moving to Pro Stocks and then Limited Sportsman. Both were happy to see the number of fans in the stands on Saturday. “They are the reason we’re here,” said Dana. Saturday the Camenga brothers raced before a capacity crowd at Fonda something that rivaled the days when their Uncle was racing.

Let’s hope that Mother Nature gives us a great Memorial Day Weekend of racing and let’s not forget what the weekend is for and remember all those who paid the ultimate price in service to our country.