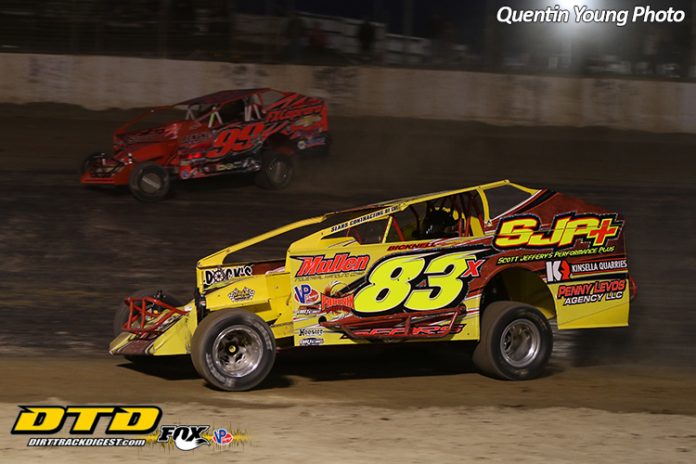 I’ve been waiting to get to a racetrack for a long time, but I did manage to make it to Fulton Speedway over the last two weekends since returning back from Tulsa. I’m sure the track closures due to the weather have contributed, but the car counts in the 358 Modified and 602 Crate Sportsman divisions have been nothing but impressive. Over 30 mods a week and 60 to 70 sportsman have made each event a crowd pleaser.

I have to wonder after Larry Wight has swept the 358 division for three consecutive weeks if someone isn’t going to put a bounty on him to “encourage” everyone else to dig deeper and drive harder until we see another driver in victory lane. Some friendly banter behind the scenes suggested it, but time will tell.

The facility’s new grandstands that were debuted for Outlaw Weekend last year have proven to be more fan friendly with wider walkways along the top row and more leg room between rows. The racing action has been amazing, and the fans have been increasing in number. I hope for the sake of the tracks that have been losing shows to the weather that it begins to cycle into dryer climates for the weekends.

Catching up with so many drivers, teams, officials, and fans takes a while. There’s so much ground to cover when the pits are wall to wall with haulers. If you’ve got something I can assist you with and you haven’t seen me yet just drop me a line or wave me down. I don’t want to miss an opportunity to be there in your time of need.

This weekend looks to be taking off full bore for me, finally, beginning at Brewerton Speedway with their season opener headlining Big Blocks, Sportsman, 4 Cylinder Stocks, plus the Lucas Oil Empire Super Sprints. The ESS Sprints follow us to Fulton on Saturday, and on to Utica-Rome Speedway on Sunday as they attempt a season opener for the 4th time. Monday I’ll be at the Hero’s Remembered 100 at Weedsport. I pray the weather settles down so we can get the central New York race season under way for once and for all, while celebrating the hero’s that fought and died to establish a republic free from tyranny, or so they envisioned it during the upcoming weekend.

I haven’t made time to write for DTD for a long time because priorities keep shifting, and other ministerial commitments have been filling my time. After a year and a half the church I pastor decided to reorganize and start fresh. Pioneering a new church is a lot of work. We still meet in the same venue, but we now call ourselves Frontier Family Life Church. We’re small and poised for growth. A friend of mine that has pioneered churches successfully has volunteered to help out as we reach into the countryside around us. Besides telling people what we’re about, we’re bringing some practical relief to families that need it, and partnering with other ministries to build unity within the local churches.

I’ve decided to try to write weekly for DTD during the race season in spite of other demands on my time, but plan on approaching it differently than in the past. Regardless, I look forward to bringing some colorful stories that promote the greatest sport on the face of the earth, dirt track racing.

When I see the crowds in the pits and the grandstands at the track that’s what I envision for the church I pastor. A blend of people from every walk of life, socioeconomic status, and ethnicity from the area God planted us. That’s what it will be like in heaven, so why not practice it now?

“Now when He had taken the scroll, the four living creatures and the twenty-four elders fell down before the Lamb, each having a harp, and golden bowls full of incense, which are the prayers of the saints. And they sang a new song, saying: “You are worthy to take the scroll, And to open its seals; For You were slain, And have redeemed us to God by Your blood Out of every tribe and tongue and people and nation, And have made us kings and priests to our God; And we shall reign on the earth.” Then I looked, and I heard the voice of many angels around the throne, the living creatures, and the elders; and the number of them was ten thousand times ten thousand, and thousands of thousands, saying with a loud voice: “Worthy is the Lamb who was slain To receive power and riches and wisdom, And strength and honor and glory and blessing!” Revelation 5:8‭-‬12 NKJV”

Heaven is a place of loud cheers and high praise. It’s loud when people and angels surrounding the throne of God offer praise to Him. It reminds me of the fans cheering for their favorite drivers all at once. We should begin to praise God like that on earth. He is worthy, after all.

Instead of worshiping by the patterns established by men we should get back to the Word of God and develop a lifestyle of worship like the examples we see, when God moved in the midst of people performing miracles, signs, and wonders for their benefit. He hasn’t changed. People have changed in the way we approach Him so much that we’ve made Him uncomfortable, and in some cases driven Him off by our own pretentious man-made kind of worship.

Personally, I want to do it His way, always, so He is drawn to what we’re doing when we let down our inhibitions and freely worship Him. I want to see God move mightily in our midst again. People need miracles. The lost world needs some signs snd wonders to bring an awakening to the glory of God. Truthfully, we should get all the practice we can now so our praise is perfected in heaven.