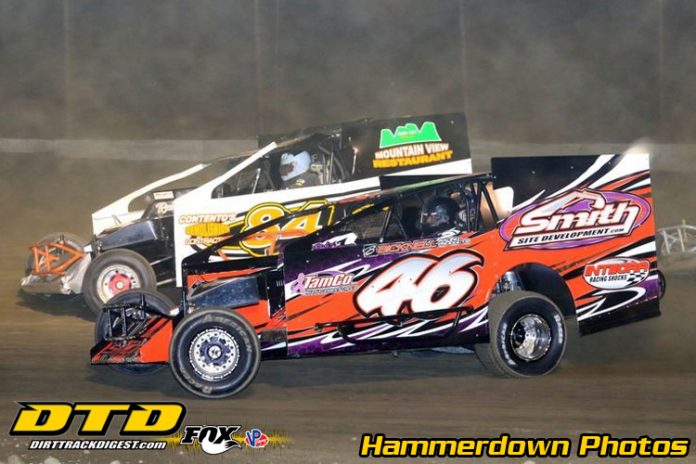 The ‘Lightning on the Mountain’ is one of the “original six” Short Track Super Series events from the 2014 inaugural season and traditionally draws a talented and diverse field of big-block/small-block Modified competitors.

‘Lightning on the Mountain’ serves as Race No. 2 of the STSS Modified Halmar International North Region which kicked off April 7 at N.Y.’s Orange County Fair Speedway.

A star-studded field is assembling for the 50-lap event offering more than $5,000 to win on the three-eighths-mile oval.

The hottest driver in Modified racing this season Matt Sheppard won the STSS North Region opener at Orange County, his first-ever at the Legendary House of Power. Sheppard is a past winner at Thunder Mountain, annexing the inaugural ‘Lightning on the Mountain’ in 2014.

Stewart Friesen has victories at Thunder Mountain in both the STSS Modified and 360 Sprint Car competition and will be a contender with the Halmar Racing No. 44.

‘The Doctor’ Danny Johnson has picked up the ride in Chris Stevens’ No. 83 small-block and will be making a “house call” to the Mountain on the eve of his induction into the Northeast Dirt Modified Hall of Fame on Monday.

Andy Bachetti, a three-time North Region champion with STSS, always performs well at Thunder Mountain and has graced the track’s Victory Lane in both the Short Track SuperNationals and Wade Decker Memorial.

The Behrent’s No. 3 has emerged as a potent ride on the STSS and Mat Williamson of St. Catharine’s, Ont., will be at the controls after a runner-up finish in last October’s Short Track SuperNationals.

PA-NJ circuit drivers will be invading the Mountain including Mike Gular with Terry Fasnacht’s No. 2A, Jeff Strunk in the Glenn Hyneman No. 126, Billy Pauch Jr. driving for Bill Pascual, Duane Howard aboard Norm Hansell’s No. 357 and Danny Bouc with the Craig and Leslie Pondish No. 6.

Anthony Perrego, driving the Brian Smith Superior Remodeling No. 44, won the ‘Lightning on the Mountain’ in 2017 and returns in search of his second conquest Sunday.

Mike Mahaney spent some time as a regular on the Mountain and returns Sunday with his Olum’s-sponsored car.

Danny Creeden won last year’s ‘Lightning on the Mountain’ and is always a contender on the short tracks of the STSS.

As always, Thunder Mountain’s central location is sure to draw some surprise visitors.

Joining the STSS Modifieds on the card Sunday are the STSS Crate 602 Sportsman in Race No. 1 of the North Region offering $1,500 to the winner as the chase for a $1,500 championship begins. Street Stocks complete the tripleheader card with the Chad Sindoni Memorial run ‘topless’ for $1,000 to win.

Pit admission is $40 with no license required.

Don’t forget, if you can’t make it to track all events for the Short Track Super Series are broadcast live via pay-per-view on DirtTrackDigest.tv.