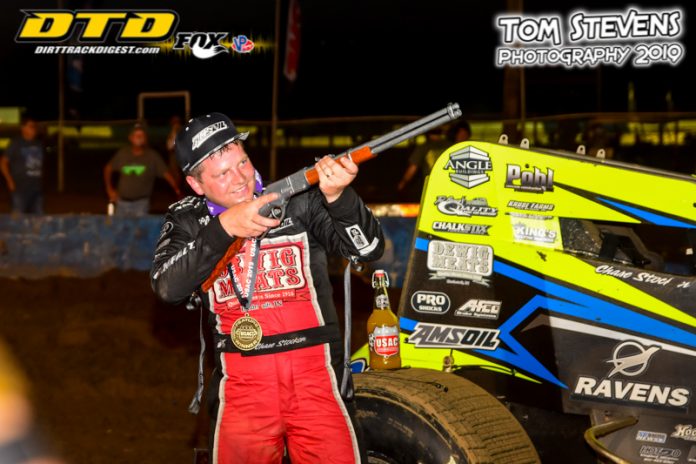 TERRE HAUTE, IN – Chase Stockon had tamed the Terre Haute Action Track multiple times in his USAC AMSOIL National Sprint Car career with a “Jim Hurtubise Classic” win in 2012 and a “Don Smith Classic” victory in 2016 to his credit.

But the one that eluded him happened to be the longest-continually running event on the series schedule, the “Tony Hulman Classic.”

Wednesday night, the “Tony Hulman Classic” and its famed rifle trophy eluded him no more as the Fort Branch, Indiana driver led all 30 laps to capture the 49th annual running of the event.

It’s the one Stockon wanted, and the emotion was quite evident on the “Ironman” driver who holds the current series record of 268 consecutive starts with the series dating to 2012.


“I’m about to cry,” Stockon exclaimed in victory lane. “I’ve been wanting to win this one so bad. At this point, it’s probably the one I wanted to win the most. This rifle right here means everything. It’s awesome. This is the one that’s gotten away from us multiple times and we’re pretty proud to be able to put this one on the wall.”

When Stockon speaks of this one being the one that got away, he ain’t kidding. Last year, he led 20 laps before he was passed by Tyler Courtney with nine laps remaining, ultimately finishing fifth. Two years ago, Stockon led the first 27 laps before being passed by Kevin Thomas, Jr. with three to go, ending up third.

This one wasn’t going to slip from the grip of the now 12-time USAC AMSOIL National Sprint Car feature winner, tying Eric Gordon for 45thon the all-time list. This one, he put into the hands of his trusty sidekick who made the right calls to help put Stockon up front and stay up front to snap their 46-race winless streak that reached back to the 2018 season opener in Ocala, Fla.

“It’s tough,” Stockon admitted. “Everybody keeps getting quicker and quicker. We’ve been really good here the last five or six years here and have had a couple slip away from us. I like these big fast half-miles, but we struggled being tight all night tonight and (Crew Chief) D.J. (Ott) made the call after the heat race of what he wanted to do to the car, and I was like, ‘You know what, if you want to do it, it’s in your hands. I’ll just drive it.’ Luckily, I held up my end of the deal for him.”

Stockon started the main event from the outside of the front row, blitzing around pole sitter Carson Short for the lead on the opening lap. Meanwhile, Chris Windom ripped past the inside of Brady Bacon off turn two on the second lap for third, then constructed a déjà vu moment on lap four with nearly the same move on Short once more to get to second.

Windom appeared hooked up on the surface that saw heavy early morning showers and seemed poise to threaten Stockon’s status for the top spot. However, that was about as close as Windom got following a handful of restarts.

Seventh-running Kevin Thomas, Jr. broke on lap seven, slowing the pace for the initial time, putting him out for the remainder of the evening. Furthermore, Short stopped in turn four on the 11th lap, like Thomas, running seventh. Nate McMillin stopped in turn three on lap 20 while running 15th.

With 11 laps remaining, the showdown for the rifle consisted of Stockon and a pair of past “Hulman Classic” winners in Windom (2011) in second and Courtney (2018) in third. The mover on the restart was another “Hulman” winner, two-time victor Robert Ballou (2015-16), who secured sixth off turn four on the 20th circuit as he and Bacon banged wheels. Ballou, then whipped by Justin Grant for fifth on lap 22 just before point leader and fourth place running C.J. Leary lost a right rear tire on lap 23 to bring out the final yellow.

Stockon’s good run of restarts had no inkling of ending on the final one on lap 23 as he immediately broke away to a six car-length advantage by the time the front runners hit the back stretch with Courtney working to the inside of Windom briefly in turn three. Windom was able to withstand the challenge to secure the runner-up spot for good.

With the front runners cruising on the middle line on the heavy racing surface, Stockon edged away in the final laps, defeating Windom by 1.963 seconds while Courtney, Ballou and Grant rounded out the top-five.

With Leary (9th) and K. Thomas (18th) suffering misfortune in the feature, Stockon is now the only driver who has finished in the top-eight in all seven starts this season. Stockon dedicated the victory to his grandpa, who’s in the hospital.