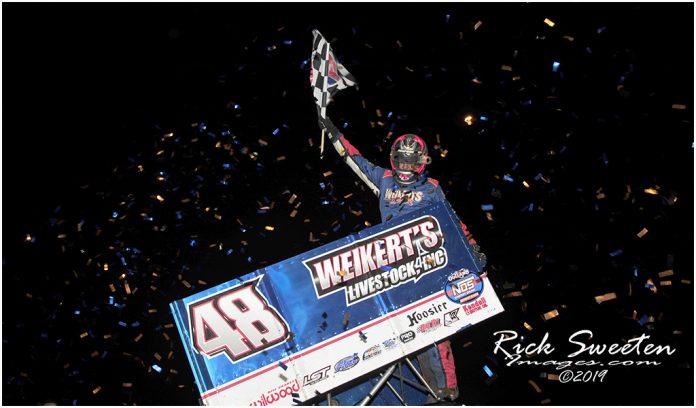 It was a night that Bridgeport Speedway owner Brian Ramey and his staff will not forget for a long time. The return of the World of Outlaws to Bridgeport Speedway for the first time since 2003.  As a bonus it was run on the much maligned 3/8’s mile track instead of the more well-known 5/8’s mile oval. To say the night was a success would be an understatement.

Unlike most of the racing season so far, the weather was picture perfect for a night of racing. With the cars and stars of the “Greatest Show on Dirt” on hand everything was falling in place for a night that will be remembered for a long long time.

A capacity crowd filled the spacious stands of the speedway, all there to see some of the greatest racing on dirt and man they were not disappointed with the 35-lap feature.  It will be a race that will be talked about for years to come by fans. It was a night the track desperately needed.

Battling weather issues along with rules package concerns so far in 2019, the track needed a pick me up and last night was just what the doctor ordered.

“Bringing the World of Outlaws back to Bridgeport is a huge step for the track, especially for new 3/8’s track,” said a very tired, but happy track manager Danny Serrano via text message on Tuesday. “The WOO are very particular where they race and for them to want to race with us means a lot. I think they were all impressed with our facility and staff from the drivers to their management. The track was phenomenal last night.  The race was the proof as the packed grandstands got what they wanted which was the WoO back at Bridgeport and back in New Jersey. All of our hard work paid off and for those who never had visited Bridgeport before now know that we are the real deal.”

*Writer’s Note – I tried to seek out Danny after the race but couldn’t locate him. As it turned out Danny was out at the intersection of Floodgate Road and Rt. 44 directing traffic.

For all of the above to work, the racing itself had to be the determining factor for a successful night and boy it didn’t disappoint. Keith Hoffman, who does the track prep for the speedway, had the track in perfect shape leading to a feature race that had the crowd on the edge of their seats as the laps wound down.

Danny Dietrich starting from the pole by virtue of his dash win jumped out to the lead at the drop of the green with David Gravel close behind. The action started to heat up as Dietrich started running up on lapped traffic early.  This allowed Gravel to close the gap and challenge for the lead. Just as Gravel seemed to have an opening to take the lead the only yellow of the race appeared for a slowing Dominc Selczi.

When the green flag waved to restart the race, Dietrich once again surged to the lead with Gravel not too far behind just waiting for an opportunity, especially with lapped traffic coming into play. Gravel once again started to rundown the leader as they started to slice and dice their way through the traffic.

By now there was another player in the mix as Carson Macedo caught the top two and started to apply pressure to Gravel for second. As those three drivers put on a show for the fans, the current king of the Outlaws, Donny Schatz, was starting to work his way towards the front after almost getting off the track in the early laps of the race and falling back to eighth.

Schatz was now on the move picking off cars lap after lap and with under five laps to go moved by both Gravel and Macedo to the second spot. Dietrich had a built up a small lead by now while his challengers were waging war amongst themselves. Schatz was on the move and with three laps to go had caught the leader. Schatz made his move coming to the two laps go signal and as they crossed the line was the new leader.

Most nights that would be the end of it and Schatz would go on and take the lead but in a move that was reminiscent of Jason’s Johnson move back around Schatz to win the Knoxville Nationals in 2016 Dietrich dove underneath Schatz and after applying a little muscle.  Just like that he was back in front when the white flag was displayed.

Schatz gave it one more shot on the last lap but to no avail as Dietrich drove under starter Kenny Golden’s checkered flag to win the race and the $10,000 first place prize.

For Dietrich it was his fifth career WOO win and with it came chest full of confidence for the PA Posse driver.

“Wow what a race, I thought when Donny got me there with two to go that I still had a chance to pass him back,” as Dietrich said as he explained the thrilling last couple of laps. “I came off two with some momentum and wasn’t quite sure what to do there. Try to blow it in on the high-side or go low and I guess I picked the right lane. I got up under him and used some muscle like he would’ve done in the same situation and was able to make it back by him. After that it was just a matter of protecting the bottom on the last lap. The racetrack was great tonight and I have to thank Bridgeport Speedway for having us here, man we did it! I hope they have this event here again next year. Small track, big track, I don’t care, let’s race. We’ve had a really good year so far and I think we’ll get even better as we start racing more.”

Even more impressive than the win itself is how it came about. After winning the Fast Pass Dirtvision Dash, the No. 48 car of Dietrich suffered what appeared to be locked rear when the tires wouldn’t turn as the car was being pushed back to the pits. The team started thrashing to switch out the complete rear end, but it was a calm thrash as team members knew their jobs and along with some help from other teams was able to complete the change in plenty of time for the A-Main.

“I guess we broke a set of gears there, not really sure what happened yet until we tear it apart, but that’s what you have to do as a team,” said a jubilant Dietrich standing by his winning car greeting his well-wishers. “You have to stay calm when something like happens or it just takes you longer to get it fixed. That’s what I try to teach my guys.  They need to be calm and collective so it doesn’t cost you later on.”

The reigning World of Outlaws champion and currently the greatest sprint car driver in the country Donny Schatz does not race for second place. Most drivers would be ok with a second-place finish, but Schatz is not one of them. After almost going over the edge of the track in turn four early in the race and falling all the way back to eighth after starting third, Schatz knew he had a lot of ground to make up with a lot of good cars in front of him.

“I didn’t start the race too good as I drove off the track there in turn four at the beginning and lost all those spots,” explained Shatz. “I didn’t see where the end of track was, and I thought I was on it and here I was on the backside of it. I put myself behind there and then had to play catch up the rest of the way. The car was really solid and I just had to wait for a little bit for the fuel load to burn off and then we were good.  I could pick my way through there.

But Donny Schatz does not ever give up and after the one and only yellow flag to slow the race, Schatz started his charge to the front. As the field strung out a little in front of Schatz it was time to go and go he did. One by one Schatz started to pick off cars as the laps ticked off. With ten to go Schatz was up to fourth and starting to rundown the leaders.

With seven to go Schatz made his move past both Macedo and Gravel to pull into second with just Dietrich between himself and another win. Schatz gave it all he could and even passed Dietrich for the lead but couldn’t hold onto it as Dietrich charged back by him to win the race with Schatz having to settle for a disappointed second-place finish.

“I got past him there with two (laps) to go when he got slowed down in traffic there,” said a disappointed Schatz. “I think once I went by it got him going again and he got his composure back and was able to drag race me down the back and going into (turn) three. I probably could’ve done something different but hey, hindsight is 20/20 so you do what you think you have to do and I did.  He did something different and it worked for him tonight.”

The Jason Johnson Racing team with driver David Gravel could not have asked for a better start to their 2019 season. Coming out of gate so far this season the No. 41 team has run 20 events with Gravel posting three wins along with 9 top fives and 15 top tens.

Considering this is their first year together as they go through a learning curve this is more than they could’ve expected. Neither the JJR team along with Gravel lack confidence and are quite pleased with how the season has gone so far.  They are really looking forward to what they can accomplish as the season progresses.

“We’ve had a great year so far this season, the past two months have been great. We’ve been strong each and every night on the track,” explained Gravel. “We’re happy with what we have going on here at JJR and we’re going to keep working hard to get even better. Tonight was a little disappointing because I thought we had a car capable of winning. I just started running down the racetrack too early.  I should’ve stayed up top to keep my speed up. What I really needed was to have put my wing back a little earlier and we would’ve been better off. We had a chance to win tonight and I really feel like crap when you think you have a chance to win and don’t, but it’s one of those deals if we keep running like this it’s going to be a great year.”

As always, I can be reached at dirtracefan25@hotmail.com or on Twitter @dirtracefan25 for any questions or comments