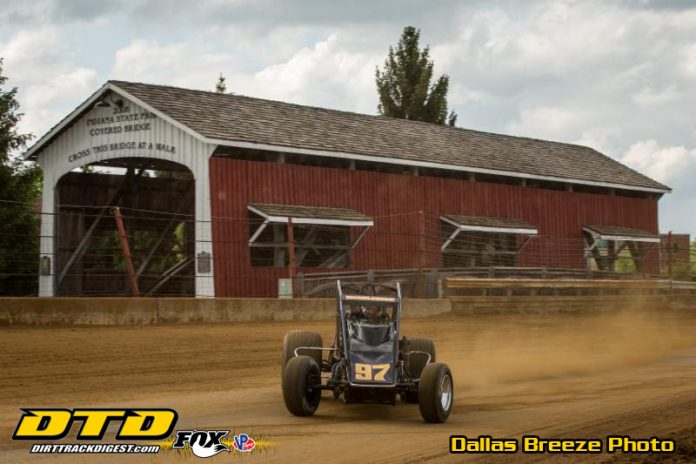 By: Richie Murray – USAC Media
INDIANAPOLIS, IN – Bravery, machismo, bravado, call it what you will.  On a late restart with seven laps remaining, Tyler Courtney used every ounce of it in his figurative tank to rip around near-race-long leader Kevin Thomas, Jr. to win a bittersweet “Hoosier Hundred” Thursday night, in the final running of the event at the Indiana State Fairgrounds.
Courtney, the Indianapolis, Ind. native whose parents were part of the promotion team for the 2005 Hoosier Hundred, kept pace with Thomas, following him for 92 straight laps until making the winning move on a restart that made all the difference, one that came with a bit of advice courtesy of a voice from above.
“(Tyler Ransbottom), who’s my crew chief on the sprint car and midget, and my spotter tonight, told me on the open red that Jason McDougal had been making up time on restarts doing that same move.  KT was lifting on restarts into one.  So, I knew that if I could just outbrave him a little bit getting in and make sure I didn’t blow past it, it would work.  Luckily, it did.  You get the open track, no lapped cars, nothing, I got to run as hard as I wanted to for the last eight laps and that’s what I did.  If it was going to blow, it was going to blow with me trying.”
The Hoosier Hundred’s illustrious history runs the gamut in terms of the names that have won since its debut in 1953.  Courtney is fully aware of the history, and Thursday night’s win was something he doesn’t take for granted.
“My name is now alongside a lot of great names,” Courtney realized.  “Including Kody Swanson, one of the best Silver Crown drivers in our lifetime.  Foyt, Andretti, Pancho Carter, all those names.  It’s incredible.”