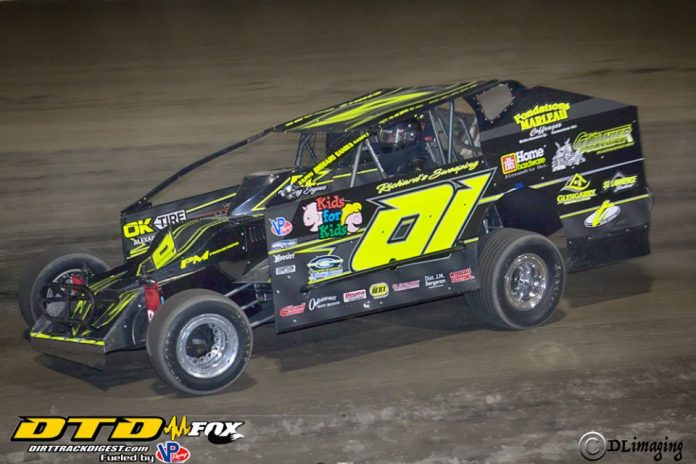 HOGANSBURG, NY –  With Mother Nature being the only winner in 2019 at the Mohawk International Raceway the drivers in all 5 divisions were ready to tackle a fast race track this past Friday night. The 30th running of the Memorial Cup was the highlight of the night with Frenchie’s Chevrolet and Frenchie’s Ford as the title sponsor.

The green flag flew for the start of the 30th Memorial Cup for the Twin Leaf Convenience 358 Modifieds and Louie Jackson raced to the early lead over Chris Raabe Corey Wheeler Demetrios Drellos and Joey Ladouceur. Jackson had a fast race car from the drop of the green flag but Raabe was a bit faster and wasted no time taking over the top spot leaving Jackson to battle with Wheeler, Drellos and Joey Ladouceur. Once in front Raabe was in control as he drove away to a straight away advantage by lap 9 but the caution would wave for Ryan McLean who spun in turn 3 and 4. On the restart Raabe would remain in front but defending track champion Tim Fuller was on the move and making his way forward. After starting 12th Fuller took 4th from Drellos then grabbed third a lap later from Corey Wheeler. After a brief battle to take 2nd from Jackson the leader Raabe was nearly three seconds ahead. By lap 20 Chris Raabe remained in control but Fuller started his charge and would close in and battle the defending Memorial Cup champion for the top spot. Raabe however would have a stronger car and begin to pull away as the laps began to click off. With 10 to go Raabe had built up nearly a two second advantage, but Fuller would stay close as the battle was on for the remaining top 5 spots as Jackson was holding back Demetrios Drellos and Lance Willix who charged from 19th to 5th by this time and was searching for more. With 5 to go traffic came into play which allowed Tim Fuller to close the gap. On the final lap Raabe would stay steady like he had all race long, even with a late charge by Fuller it was not enough. Chris Raabe would march on and claim his 3rd career Memorial Cup victory and join Billy King, Dave Heaslip and Carey Terrance as back to back winners of the prestigious event. Fuller would cross 2nd over Lance Willix, Louie Jackson Jr. and Demetrios Drellos.

Anthony Rasmussen would take the lead at the drop of the green flag to start the 25 lap Crossroads Tobacco Sportsman feature over Cedric Gauvreau, Brent Kelsey, Shane Pecore and Zach Arquiett. With a fast track Rasmussen was able to grab a comfortable lead but Kelsey would close the gap and make a race out of it in the early laps as Arquiett made a big move to take 3rd and the chase was on. Arquiett would show his strength early as he took the lead on lap 8 and began to stretch out the advantage while Rasmussen, Kelsey, Pecore and Thomas Cook completed the top 5. On lap 15 the big lead that Arquiett had would go away as Brianna Ladouceur and Billy Cook would slow on the front stretch with problems bringing out the only caution in this race. On the restart Anthony Rasmussen would grab the lead but Shane Pecore would start his charge to the lead. Driving the back-up Cedric Gauvreau car, Pecore would move to 3rd on lap 16, then charge to lead with a big run on the outside on lap 17. Once in front Pecore would pull out to over a straight away leaving Rasmussen, Arquiett, Brent Kelsey and teammate Cedric Gauvreau to battle it out. Without a caution in the final laps the night would belong to Shane Pecore, as he dominated to score the opening night win in his, one night only ride, with Anthony Rasmussen, Zach Arquiett, Brent Kelsey and Cedric Gauvreau completing the top 5 at the checkers.

In the 20 lap Mod Lite feature event Kevin Foster was the dominant force all night long. Foster took the lead on lap 4 of the 20-lap contest from early race leader Steve Comeau but would not have an easy time. On lap 4 the red would fly for Jason Premo who flipped his car in turn 4. He would climb out without injury. When the green came back out it was Foster again in control but Eric Caron was making some early moves as he took over 2nd bringing Michael Dion to 3rd with Steve Comeau and Brad Reif completing the top 5. Foster would have by far the fastest car towards the midway portion of the event building up a half track advantage by lap 13. On lap 14 the final yellow flew giving the field one more shot at the leader. When the green returned Foster also returned to the lead and that would be it for Eric Caron and the rest of the Mod Lite field as Kevin Foster would march on to a dominant win. Caron would cross in 2nd over Michael Dion, Brad Reif and Harley Brown would charge to 5th at the finish.

Novice Sportsman had one of two caution free events and this one was led by Kurt Russell early on who had a fast car with Gavin Riddell and reigning Mod Lite champion Dan Reif giving chase. Russell would have a big lead but lapped cars started to hold up the leader which allowed Reif to make a race out of it in the closing laps. On the final lap Dan Reif would make his move to the high lane but Russell was not to be denied as he held on for his 3rd career win in the division making him eligible for the Sportsman class. Reif would finish a hard fought 2nd over Gavin Riddell, Nolan Swamp and Dan Bechard.

The 10 lap Bandit feature would also go caution free and Nick Perham had a great race car throughout the race. Jeff Trapp and Jeff Putnam gave Perham all he could handle during the race but Perham was up to the challenge. Over the remaining laps Trapp would make it close but Perham would hold on for the win over Jeff Trapp, Jeff Putnam, Terry Green Jr. and Anthony Law.

Next week the Mod Lite division has the night off next week but G&R Auto Parts will be on hand along with the Twin Leaf Convenience 358 Modifieds, Crossroads Tobacco Sportsman, Novice Sportsman and Bandits. Racing gets underway at 7:30pm and Canadian money will be accepted at par at the main gate. For up to date results, points and everything happening at the track follow us on Facebook, Twitter and our website at mohawkintlraceway.com