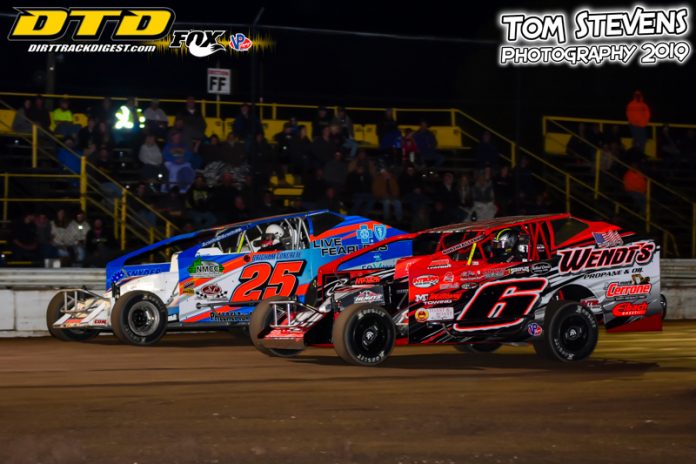 RANSOMVILLE, NY – It took four weeks longer than expected, but Ransomville Speedway finally got its 62nd season of racing underway on Friday night with Dunkin Donuts, 87Buf and Triple T Auto Parts presenting the Memorial Day weekend/Opening Night program. The start to the season had been delayed by three weeks after steady rains throughout much of May had left the property waterlogged and unable to dry out.

Rudolph had the luck of the draw on opening night as he drew the pole for the 40-lap Modified feature. That starting position paid off as he led all 40 laps for his first win of 2019 at the “Big R”. Rudolph was pursued throughout the race by Mat Williamson in his return to weekly Modified racing at Ransomville. Williamson kept close tabs on Rudolph, especially in lapped traffic, but could not make a significant challenge for the lead.

Rudolph survived a couple of late race restarts and was able to cruise to the checkered flag followed by Williamson. Gary Lindberg came home in third. Chad Brachmann and Mike Bowman made impressive runs late in the race to place inside the top five. The top ten was split evenly with five Americans and five Canadians finishing at the front of the field.

As an added bonus, Rudolph won a drum of VP Racing Fuel by posting the fastest lap in the feature with a quick time of 17.477 seconds. Andrew Spurback was the recipient of a brand new Hoosier Racing tire based on a random draw.

In 2018, Brett Senek managed to win the Investors Service Sportsman track championship without winning a single feature during the season. Senek made a long overdue return to victory lane on opening night of 2019 as he led all 25 laps to pick up first win at the “Big R” in over a year. He took the lead from pole sitter Robbie Johnston and never looked back as he won in dominating fashion.

Brian Monahan and Billy Bleich led the field of Ki-Po Chevrolet Street Stock to their opening night green flag. Monahan grabbed the early lead from Bleich before the yellow flag flew on lap 2 for a spin by Chuck Cala. Bleich took the lead on the restart, but he developed engine issues just one lap later to end his evening.

Jason Fontaine inherited the lead from Bleich followed by Cory Sawyer, Pete Stefanski and Monahan. Sawyer did not waste any time once the race resumed as he took over first place on lap 5. The race was only slowed one more time by caution, which allowed Sawyer to dominate the rest of the way.

The “Huckster” Cory Sawyer grabbed the Street Stock win after taking four victories in 2018. Monahan finished second in the debut of a brand new ride for him. Stefanski, Fontaine and Anthony Guthrie rounded out the top five.

“The Guy” Mike Kramarz made an impressive return to the Gippster’s Collision Mini Stocks after spending last season competing in the Street Stocks. Kramarz stomped the field in both his heat and feature to capture his first win of the season. Ryan Plante finished second followed by Cole Susice. Steve Matson and Brandon Close.

Butch Zimmerman was declared the winner of the Stevenson’s Hardware Novice Sportsman feature after Bubby Pawlak was disqualified in post-race inspection. It was Zimmerman’s first open-wheeled race in many years after competing in full-fendered cars for close to 20 years. Mike Martin was credited with second place. David Fingerlow, Orval Harris and Tom Lalomia, Jr. completed the top five.

Next Friday, May 31, the Patriot Sprints make their yearly visit to the “Big R” in the only winged sprint car race of the season presented by A-Verdi Storage Containers, All Metal Works and Just Signs. The Sportsman, Street Stocks, Mini Stocks and Novice Sportsman will also be in action. The Modifieds have the week off. Racing starts at 7:15 p.m.