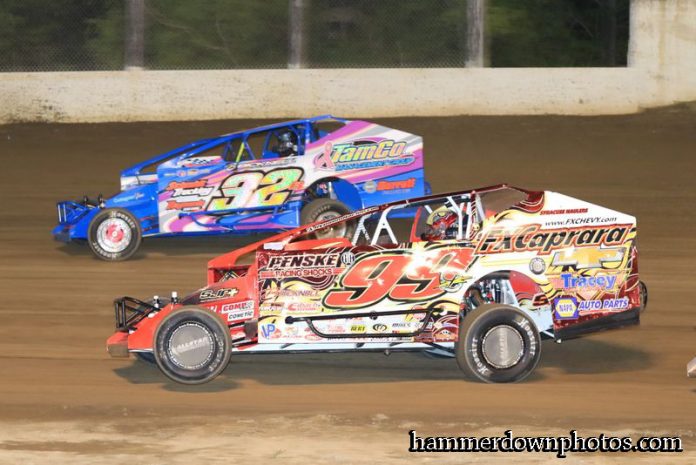 Ronnie Davis III had competed in Big Block Modified events before, but that was behind the wheel of his 358-Modified. On Friday night at Brewerton, Davis rolled out a brand new big-block ride and promptly drove it to victory lane, becoming quite possibly the first driver in the modern era of Dirt Modified racing to score the win in their big-block debut. Did Davis ever expect to win his first night in a big-block?

“Heck no,” Davis said. “Definitely not on the first night. We went out there just trying to get comfortable with the car and be competitive. I would’ve been happy with a top ten or maybe a top five, but once we got around Pat Ward for the lead our car just kept getting better and better.”

Davis started third and spent much of the first half of the race battling Larry Wight for second. Eventually, Davis got rolling up top and got to the lead on lap 15, never looking back after reaching the front.

“Once I got by Pat, I started to think that I may actually have a shot at the win,” noted Davis. “Once we got to halfway and the laps started clicking off and I wasn’t seeing anybody, I was thinking this might be it. Then once I saw that five to go signal, I started getting real nervous, I just had to make sure I didn’t overdrive the car and throw it away.”

With the help of Joe Abbass, Davis was able to make the move from Sportsman to 358-Modifieds at the end of 2017. After a successful rookie campaign that nearly saw him win the track championship at Fulton, Davis was able to secure a Big Block ride at Brewerton with Tom Coar and Chris Clark, a ride piloted by Gary Tomkins the last couple years.

“With the big-block, I found out I really have to slow it down a lot more than the 358,” Davis said comparing the two motors. “You definitely got to get out of the gas a lot earlier with the Big Block, but other than that it felt pretty similar, just a lot more power at the end of the straightaway.”

It was definitely a short learning curve for Davis, driving by and holding off some of the best in Dirt Modified racing to go 1-for-1 in his Big Block career.