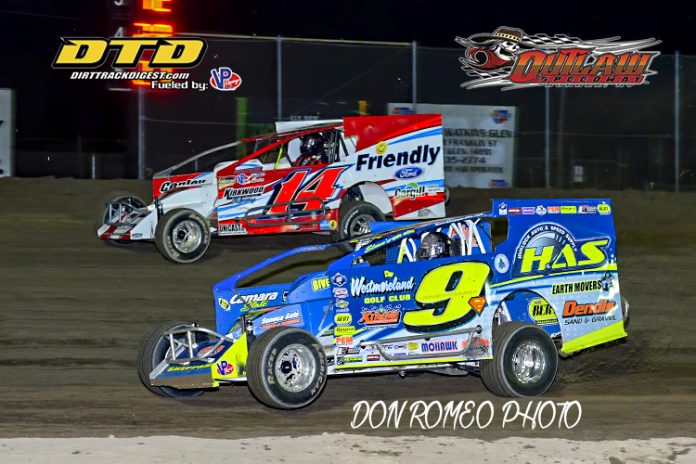 DUNDEE, NY – Matt Sheppard made short work of the 30 lap Friendly Chrysler, Dodge, Jeep, Ram Modified feature as he cruised to his third straight win of the season and remains perfect at the Outlaw Speedway in 2019. Alan Johnson led from the opening green flag till lap 6 when Sheppard took over the top spot and never looked back. AJ Slideways ran a strong second till lap 13 when he had to head pit side due to a flat tire, however he was able to storm back to finish 8th at the checkered flag. Justin Wright made a late race pass of Dillon Groover who had run in second place throughout much of the feature to finish second with Groover third at the finish. Second generation pilot, Kyle Coffey continues to impress with a very steady drive to finish fourth followed across the line by Hurricane Steve Paine who drove from his 12th starting position to round out the top five.

Will Shields had an absolute dream night as he won both the Sunrise Insulation American Racer Tire as well as the DIRTcar Hoosier Tire Sportsman feature events. In all previous events, Shields has raced in both classes making the necessary changes from class to class and on this night he was not to be denied as he claimed the feature events in both divisions.

In the Sunrise Insulation American Racer Tire finish second generation driver, Brett Buono put on a steady drive but had nothing for Shields at the finish and had to settle for second. Kenny Hammond, who ran second early, was third at the checkers followed by Jimmy Zacharias with Hollywood Chris Silvers rounding the top five.

In the DIRTcar Crate Sportsman feature event a red flag on lap one stopped the action for the heavily damaged machines of Doug Smith and Jeff Lawrence. But once back in action the remainder of the feature was run off in short order as Shields dominated the field as he did in the American Racer Tire feature. Brandon Butler had to settle for second place at the finish chased across the line by Steve Gray, Nicole Hoag who raced in the top five the entire distance with AJ Lloyd rounding the top five finishers.

Heats were claimed by Shields and Alex Payne.

It was Stan’s No Tubes Night at the Outlaw Speedway and in the Stan’s No Tubes sponsored Street Stock Class Glen Whritenour picked up his second feature win of the season having won the Empire 100 on April 13 to open the year. Whritenour, who has been a picture of consistency throughout the entire year ended the two race winning streak of top competitor, Dylan Cecce who had to settle for the runner up spot at the end of the feature event. Chuck Winslow had his best run of the year finishing third chased across the line by Jake Karlnoski as CJ Guererri had another top five finish. The Stan’s No Tubes Street Stock Division once again produced a tough field of competitors providing their usual wheel to wheel action.

The Marion Decker Insurance Agency IMCA Modified feature event, Ole’ Dick in the Dirt, Rich Karlnoski claimed his first feature win of the 2019 season as he dominated the 11 car field. Another steady performance for last year’s Track Champion, Rodney Morgan found him claiming second at the checkers followed by Tony Harris, in his best run of the year rounding out the top three podium finishers. Eddie Sites and Mark Griffin rounded the top five.

2018 Track Champion in the 4 Cylinder Division, Adam Austin claimed his first feature win of “19” as he bested the 16 car feature event. Austin, who has been very consistent in the early part of the season found the winning formula and picked up the popular win. From second on back it was a case of the cream rising to the top as Bob Doolittle nailed the runner up position chased across the line by Scott Lehman. May 10 feature winner, Josh Oles was fourth with 2017 Track Champ, Mike Stone rounding the top five.

The Marion Decker Insurance Hobby Stock Class once again did not disappoint as the competition level and the racing on the track was a real nail biter. For the fourth time in as many races yet another new face found victory lane as Wayne Ellison capped off a perfect night by winning his qualifying heat and the feature event. Ellison was chased across the line by last week’s winner and 2018 Track Champ, Marc Minutolo who had to settle for second. Frank “Bubba” Burnell was third followed by Casey Wagner as veteran racer, Jason Clugstone wrapped up the top five.

In addition to Ellison, Bruce Kinner also picked up a heat win.

Up next on Friday, May 31,, 2019 at the Outlaw Speedway it will the 3rd Annual Gary Montgomery Memorial featuring the Sweeney Rush Crate Late Models making their lone appearance of the season at the Yates County speed plant. The night of action will be sponsored by Doug Gross Construction of Corning.

All gate times and admission prices can be found at www.facebook.com/OutlawSpeedwayLLC/.

As always plenty of free camping and parking, kids under 1 are free as well as free rides on the Outlaw Speedway Monster Truck, Outlaw Crusher.

All other information is just a click away at www.outlawspeedwayllc.com.