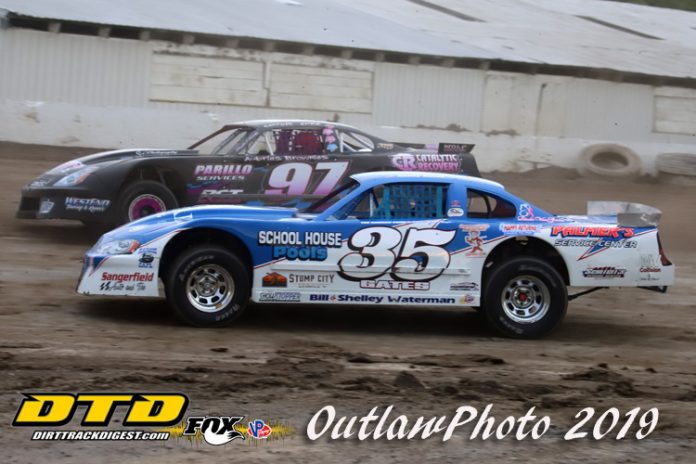 FONDA, NY – Saturday evening at the Fonda Speedway was scheduled to be a six division racing program highlighted by the Earl Halaquist Memorial for the Patriot Sprint Car group. Unfortunately 15-laps in to the Algonkin Pro Stock feature, heavy rain came in to the Fonda, NY area and with more severe weather on the radar Fonda promoter Brett Deyo was forced to cancel the remainder of the racing program.

As a special tribute to the Veterans and military, Brendan Gibbons of Gibbons Military Motors had two of his jeeps on display for the evening. One of the jeeps according to Gibbons was a 1945 Willys MB, nicknamed “Lil’ Buddy”, which saw service with the US Army in WWII. This jeep was restored by Brendan and Richard Gibbons (WWII veteran) in 2010.

The other jeep was a 1942 Willys MB, nicknamed “Dolly.”, which saw service with the United States Marine Corps and US Army during WWII along with postwar service with the US Airforce in Europe. This Jeep was restored in 2011 by Brendan and Richard Gibbons.

The jeeps, which were piloted by Taylor LaPlante and Alex Comins, paced the field during opening ceremonies while the National Anthem was being sung by Mimi Lazzaro. Gibbons appears in parades around the local area with his Jeeps, this past week appearing in the Memorial Day parade in Scotia, NY. That evening Gibbons and his friend Brett Mortensen piloted the Jeeps in the parade.

A moment of silence was observed for Mr. Halaquist and “for all of the people who fight to protect our freedom in this country and abroad” Fonda Speedway announcer Paul Szmal said.

The holiday crowd gathered a nice 50/50 prize for the evening, worth $1,249 to the person who had the winning ticket.

The 20-lap Montgomery County Office for Aging Inc. Limited Sportsman feature began with pole position starter Bill Port the early race leader. That lead was short lived as outside pole starter Alan Hanson took the lead as lap one was completed with the yellow flag out on lap two for Michael McCallion who was in the wall in between turns one and two. McCallion was not injured but was done for the evening at that point.

On the restart, seventh place starter Rich Christman was the new race leader with Hanson second and sixth place starter Brendan Gibbons now third. Christman held a straightaway advantage at the halfway point in the event with Hanson, Gibbons, Dylan Eldred, and Brett Mortensen completing the top five. 11th place starter EJ McAuliffe and Steve Wagoner gained some positions in the closing laps as Christman maintained his lead to the checkered flag for his first career win at Fonda.

Brendan Gibbons of Gibbons Military Motors added $100 to the purse for the event in honor of his cousin John Hemstreet who was killed in World War II.

The 20-lap Algonkin Motel Pro Stock feature started with Andy Graves and Cassidy Wilson in the front row with Graves taking the lead at the drop of the green flag. Justin Knight started the event in the fourth position and by lap four he was in the second position behind Graves. On the outside of the front stretch at the line to complete lap five, Knight was the new race leader with fifth place starter Kenny Gates now in the second position.

Gates wasted no time getting the lead away from Knight, using the inside groove in turn four to take the lead away on lap nine with ninth place starter Chuck Dumblewski, 12th place starter Luke Horning, and Graves completing the top five. Dumblewski got by Knight for the second position on lap 12 with Horning also getting by for the third position. Rain started to fall with five laps to go with Joe Kriss throwing the yellow flag and race director Denny Tilison telling the drivers to go into the pit area.

After a short delay as the rain continued to fall heavily, Fonda Speedway management declared the feature official after 15-laps with gates taking the 82nd win of his career in the division followed by Horning, Dumblewski, Knight, and eighth place starter Josh Coonradt.

The 15-lap Trackside Body Works Street Stock feature was a survival of the fittest to the checkered flag with Stephen Young leading at the drop of the green flag after starting on the outside pole. Seventh place starter Zach Sorrentino was the new second place car when lap one was completed with eighth place starter Dave Horning Sr. third after both were able to get by Michael Arnold for the position.

On lap nine the top three of Young, Sorrentino, and Horning Sr. were racing together for the race lead with Horning Sr. getting by Sorrentino for the second position on lap nine. Two laps later, Horning Sr. was the new race leader with the caution coming out on lap 12 for Horning Sr. who was turned intentionally by Young in turn four. For his actions, Young was black flagged and disqualified from the event while Horning Sr. was done for the evening with front end damage to his car.

On the restart, Sorrentino got loose in turn one and nearly spun his car but instead the car “bunny hopped” in the air as described by announcer Paul Szmal which resulted in Arnold taking the lead at that point. Sorrentino suffered a flat tire in the process as did Cliff Haslun, both pitting for new tires and continuing on at that rear of the field.

Arnold led the remaining laps for his first win of the 2019 season and the third of his career over Sorrentino who got all the way back to second, Justin Taylor, Haslun, and Robert Wilmont.

The Fonda Speedway Kid’s Club will also have a Bicycle Giveaway for the kids and there will also be a benefit for the Make a Wish Foundation with donations accepted all evening long at the Make a Wish display table.