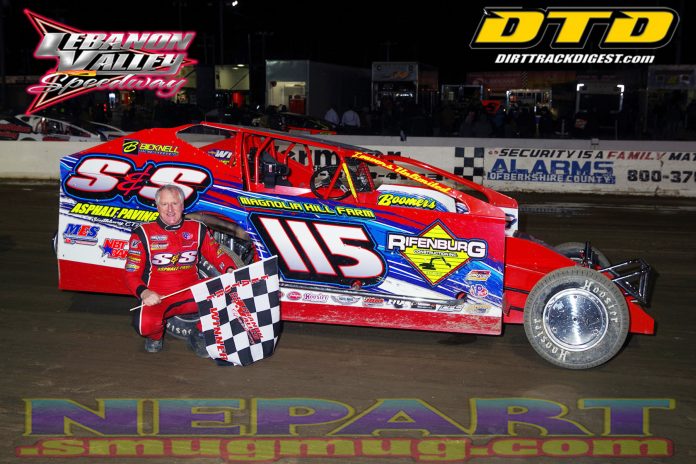 WEST LEBANON, NY – Saturday night saw teams and drivers at Lebanon Valley have to rush in order to beat incoming rain. It was a success, for the most part.

In the Modified Feature, Chad Jeseo started from pole in his Kaneg No. 34J and had his strongest Modified run of the season to date. The former Pro Stock champion led handily for much of the first part of the feature.

A number of the strongest Modified contenders had trouble progressing up through the field. Peter Britten was fastest in warm-ups and was coming off his first Lebanon Valley win. He was unable to do much in the feature and ended up 11th.

The man to beat on the evening turned out to Kenny Tremont Jr. The Sand Lake Slingshot was able to charge to the front from a mid-pack starting spot and dispatch of Jeseo. From there, Tremont was able to open a gap on the field.

A late caution due to issues for Mike King (who was running excellently) closed everyone back together for a Green-White-Checker. On that restart, Tremont was able to pull away to take his second win of 2019 and extend his all-time record with his 134th career Big Block Modified victory.

Rob Pitcher finished second in his best run in over a year. Andy Bachetti was third, followed by Kyle Armstrong and Wayne Jelley. Jeseo ended up seventh. In addition to Britten finishing 11th, J.R. Heffner ended up 14th and Keith Flach 15th.

Bachetti’s third-place finish was good enough to elevate him from third into the points lead. His advantage is six points over Britten while Tremont and L.J. Lombardo are tied for third.

The Small Block Modified feature was a start and stop affair. Alan Houghtaling started from the pole, but Jason Herrington was able to quickly take the lead away. Herrington was never able to get much of an advantage because of a series of interruptions that allowed the field to stay close.

The interruptions also allowed Bachetti and Brett Haas to come to the front from Row 7. Herrington kept the lead until a restart with four laps to go.

At that point, Bachetti was able to sweep past into the lead. From there, the Sheffield native pulled away to take his fourth Small Block Modified victory of the year.

Haas was able to follow Bachetti past Herrington to finish second and keep the points lead. Herrington held for third, followed by Dillon Steuer and Steve Hough.

The Pro Stock feature was another rough and tumble affair with a number of cautions. Steven LaRochelle debuted a new crate motor in his No. 178 and showed a significant amount of speed early on.

Nick Hilt switched back to his new chassis and debuted new graphics Saturday night on his No. 17. Hilt is very confident about his newest mount. Unfortunately for Hilt, he caught the wall exiting Turn 4 to end his night early

For LaRochelle, issues under the hood ended his chances of winning. LaRochelle’s car suddenly died on a restart due to an issue unrelated to the new powerplant. While the LaRochelle Racing team worked on the distributor, the race became a duel between Jason Meltz and Jason Casey. The Ghent-based Meltz was able to hold off the Casey machine and take his first win of 2019.

Nick Arnold was just able to edge out Jason Casey at the line for second. Jay Casey was fourth, while Rob Yetman was fifth. By virtue of winning, Meltz expanded his point lead from two to 12 points over Jay Casey.

In Pure Stock, Jeff Kreutziger and Ed Hatch each won features. For Kreutziger, it is his third win of the year while Hatch has two victories himself. Kreutziger currently leads the Pure Stock points by 14 over Hatch with Jeff Meltz Sr. and Rob Partridge tied for third.

The rains showed up with a vengeance less than two minutes after the Modified feature ended. As a result, the 15-lap 4-Cylinder feature that was set up to run has been postponed. A rain date for that event will be announced at a later date.

The scheduled 4-Cylinder race was postponed due to rain and will be made up at a future date.