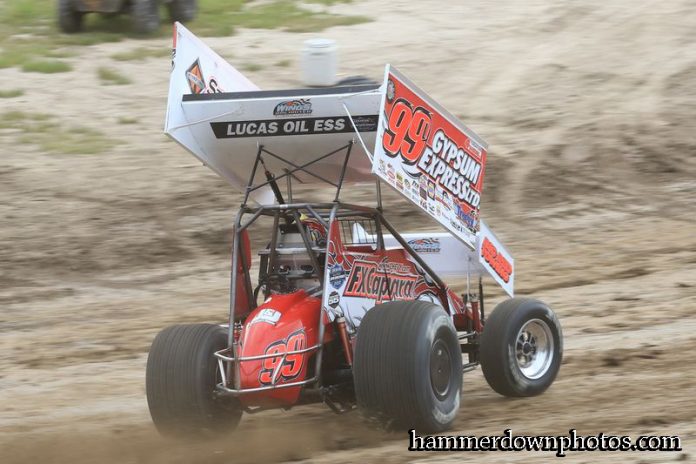 FULTON, NY – With threatening weather moving in on the Fulton Speedway as the Lucas Oil Empire Super Sprint feature took the checkered flag it was only fitting that ‘Lightning’ Larry Wight would find his way to victory lane. As soon as he exited the race car the rain drops began falling and the sky lit up as he celebrated atop the wing on the front straightaway.

The win is Wight’s second career A-Main triumph at the Fulton Speedway with the Empire Super Sprints. Last fall he came from rear of the field to win in dramatic fashion. On this night he started near the front and used his home track knowledge to take the lead and charge away for the $2,085 win.

“This is a real good feeling,” stated Wight after winning the Empire Super Sprint A-Main. He remained undefeated in feature action so far at Fulton in 2019. “We just got to keep this rolling.”

Chuck Hebing finally had some luck go his way as he redrew the pole for the start of the 25-lap NAPA Auto Parts, Mach 1 A-Main. He beat out Jason Barney on the opening lap on the high-side of turns one and two in order to take command of the race.

Hebing was quickly joined on the top by fourth starting Wight. Wight put his No. 99L up on the cushion to apply pressure to the leader Hebing. They waged a hard fought battle at the front of the field with Wight working around Hebing on lap six only to have a caution negate the pass.

When the green lights came back on Hebing kept Wight at bay for a lap before the second and final caution of the race was displayed on lap eight. This time Hebing didn’t get nearly as good of a restart allowing Wight to take a shot on the outside. Hebing tried to slide up to the top for the block but Wight was already there allowing him to take the lead.

“I was able to stay with him down the frontstretch,” stated Wight of the pass on Hebing. “I thought he was going to try a little bit more of a slider on me, but he left me enough room.”

Hebing remained close to Wight as the leaders got into traffic for the first time on lap 16. Wight continued using the high-side hustle that got him to the front while Hebing began searching. As he searched Wight opened the gap on the field.

The feature reached the final third of the event with three drivers vying for second. Hebing had it while Barney and Paulie Colagiovanni each looked to take the position from him. That would happen on lap 18 as Barney took over second before putting his attention on Wight.

Barney was able to make up ground on Wight in the final laps, but it wasn’t enough as Wight went on to win his second consecutive Lucas Oil Empire Super Sprint Series win at his home track after winning last year’s finale in September.

Barney, of Brewerton, N.Y., continued his strong showing to start 2019 with his third consecutive podium finish. Barney, a multi-time winner at Fulton in the past got things rolling on the bottom late. He just ran out of time to get to Wight.

“I thought we were catching him there for a little bit and it was going to fun,” mentioned Barney. “Lapped cars made it real interesting. I just got going a little too late. The guys gave me a great race car. We’ll keep riding it.”

Colagiovanni rebounded from a tough night on Friday at the Brewerton Speedway to come home in the third spot for his second podium finish of the 2019 season.

“This is the best I think we’ve ever been here setup wise,” cited Colagiovanni. “I’m happy with our performance. I had some fun racing with Jason. He works out of back of our shop now so it’s fun. He helps me out a lot with car tips, teaches me a lot and is a very good racer. Hopefully one day I can get him here.”

Matt Tanner drove from the eighth starting spot to cross the line fourth while Hebing faded back in the closing laps to complete the top five.

With weather moving in, the Fulton Speedway stay as full bore in getting the show in. From heats to the completion of the ESS A-Main only took one hour and forty minutes.