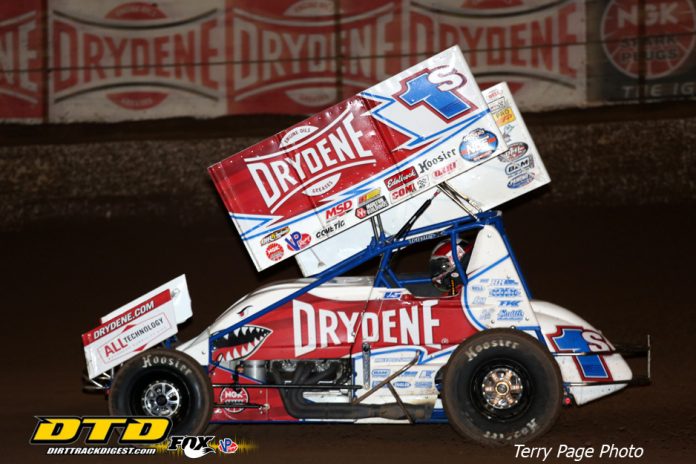 CHARLOTTE, NC –  Inches before Logan Schuchart claimed his third World of Outlaws NOS Energy Drink Sprint Car Series win of the season, he could feel defeat breathing down his neck.

To it, he said, not today. Even with few options to stop it.

Life was close to leaving his right rear tire – a used tire from last year. It seemed inevitable. He claimed the lead with the assist of several drivers blowing a tire during the second night of the $15,000-to-win United Rentals Patriot Nationals at The Dirt Track at Charlotte on Saturday.

That caused Schuchart’s right foot to become wary of the throttle in the closing laps of the Feature.

“I was trying to be kind of conservative and not spin the tires, not run it into the corner very hard, try to not wear the tire very much,” Schuchart said.

A second too long on the throttle or off it handed defeat the win.

That was not an option, though. He had something to lose. The top four in points blew a tire with a handful of laps to go, giving Schuchart the opportunity for a healthy points gain.

Behind him, though, defeat had nothing to lose. Australian James McFadden, running just his second race in the No. 9 Kasey Kahne Racing car, is only driving the car until an injured Kahne is ready to return. Points are of no concern. He’s there to win at no cost.

To McFadden, defeat was in front of him, and he was going to do whatever it took to beat it.

Having blown a tire in the early stage of the race, McFadden managed to stay on the lead lap and use his newly granted right rear grip to blow by anxiety-ridden drivers trying to save their tire.

“We just had nothing to lose, really,” McFadden said. “Everyone was trying to conserve, and I wasn’t.”

With three laps to go, McFadden became the hare chasing tortoises. Due to his carefree ability to run his car as hard as he wanted and several drivers blowing a tire, he went from 16th on Lap 27 to 5th on Lap 28. A lap later he was in the podium.

A caution flew with one lap to go, setting up a green-white-checkered finished. On the start, he blew by Kerry Madsen on the high side to take second. Next became a duel between the Tasmanian devil and the shark.

McFadden had nothing to lose, but Schuchart said he was going to make his Shark Racing car as wide as he could. Coming off turn two on the final lap, McFadden launched off the corner and went from being two car lengths back to on Schuchart’s bumper. Then into the final turn, both drivers threw their car into the turn. McFadden up top. Schuchart on the bottom.

A car length distance grew between the two through turn three, but coming off turn four McFadden had a race winning run. Schuchart knew it. Defeat was breathing down his neck. His only option was to move up a lane, blocking McFadden’s run.

“I knew somebody would be coming, especially the guys who changed their tire,” Schuchart said. “I heard James when we went through (turns) one and two. I just tried to make my car as wide as possible. Definitely if we had another corner, he would have got by me. But it all worked out great.”

McFadden wishes there was that extra corner.

“It was good fun. I wish we had a couple of more laps,” McFadden said. “We were pretty decent there.”

McFadden did earn the hard charger award for the night, after starting 18th. Schuchart had his own impressive charge, coming from 14th to win – the furthest back a driver has come from this year to win.

His win leaves him fifth in points – 136 points behind leader Donny Schatz. It was more than a 20-point gain from the night before.

Schatz ended the race 11th, after being three laps from victory before blowing a tire. Brad Sweet, who sits second in points – 42 points behind Schatz – also blew a tire after taking the lead from Schatz, finishing 18th.

Schuchart’s right rear tire resembled an asphalt modified tire more than a Sprint Car tire after the 31-lap Feature, making he and his team shake their head on how it survived.

“I knew I had a lot more rubber than the other cars, just by looking at them and when I go into the corner the last five laps it just felt like it wanted to drive right by them,” Schuchart said. “I don’t know why. This thing [the tire] was used. I’m pretty sure it was up in the rack from last year. So, maybe if it sits for a while it adds something to it.

“I actually wasn’t real happy with the tire being put on before the race, but it lasted and it got us the win.”

With defeat breathing down his neck, Schuchart and his used – now very used – right rear tire said, not today.

The World of Outlaws on Memorial Day Monday, May 27, will next venture to Lawrenceburg Speedway in Lawrenceburg, Ind.