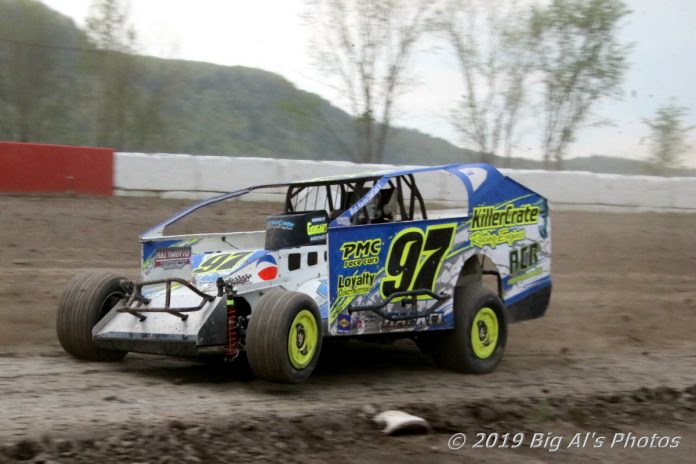 Hackel had one of the best cars among a 42-car KOD entry list throughout the event, and the former Devil’s Bowl Speedway track champion paced most of the 50-lap feature race, but he had anything but an easy stroll to the win. Several restarts kept Hackel honest all race long, and veteran driver Tim LaDuc even took the lead on two occasions, but Rensselaer, N.Y.’s Hackel was able to distance himself in the final 10 laps for the win.
LaDuc was engaged in an entertaining battle for the runner-up finish with Kenny Tremont Jr. when his engine exploded in the final corner coming to the checkered flag. Tremont and Adam Pierson made evasive moves to avoid LaDuc’s slowing car, and finished second and third, respectively. Brian Calabrese hung around the top five all night and ended up in fourth place, with Elmo Reckner making a surprise run in fifth place behind the wheel of Larry Gallipo’s Limited Sportsman car.

Billy Lussier finished sixth ahead of a sensational performance by rookie Brent Warren. Vince Quenneville was eighth, followed by Jason McClatchie – the last driver on the lead lap. LaDuc, whose car came to a rest in Turn 4 just 100 yards from the checkered flag, was scored 10th.

Lacey Hanson continued her reign as the “Queen of the Sprint Cars” with her sixth career win on the Sprint Cars of New England (SCoNE) tour. The Orwell, Vt., speedster took the lead on the second circuit of the 25-lap race and pulled away, but two-division star Adam Pierson rallied late. Pierson dealt with a broken front wing and a broken suspension to come within two car lengths of Hanson’s lead, but was unable to mount a serious challenge.

Hanson held Pierson off for her first win on a half-mile track. Matt Hoyt, Will Hull, and Dan Douville rounded out the top five. Jordan Forwalt was sixth, followed by Jake Williams, Floyd Billington, Andy Durie, and Rick Stone.

Mike Ryan of Chelsea, Vt., surprised even himself by winning the 20-lap O’Reilly Auto Parts Limited Sportsman feature. Ryan traveled to Devil’s Bowl as a crew member for Jesse Durkee – who attempted to qualify the same car for the KOD race – and Durkee asked Ryan if he’d like to drive the car in the Limited class. Ryan, a former Mini Stock champion, delivered in spades by leading the final 14 laps and taking his first career win in the division.

Johnny Bruno was a big surprise with a runner-up finish in his first Limited Sportsman start; he ran side-by-side with Ryan for lead inside five laps to go before settling for second place. Former 500cc Mini Sprint champion Austin Chaves rebounded from a spin to finish third in his first Limited start, with Adam Piper fourth. Anthony Ryan took an impressive fifth place in his first career race of any kind.

Bill Duprey of Hydeville, Vt., inherited the 51st win of his Devil’s Bowl career in the Super Stock division. Garrett Given dominated the 20-lap feature but was found with an unapproved carburetor in the inspection line and was disqualified. Jim McKiernan ended second officially, following a good battle with third-place Curtis Condon. Rookie Roo Forrest was fourth with Scott FitzGerald fifth.

Shawn Moquin of Milton, Vt., led every step of the 15-lap Mini Stock feature, but he had plenty of company from first-time rookie racer David Sartwell-Cornell. The rookie was very strong and gave Moquin all he could handle in the final laps. Craig Kirby finished a career-best third, followed by Jake Barrows and Nathan Smart.

Twin brothers Shawn and John McPhee of Rutland, Vt., put on a fun show in the 15-lap feature for the Friend Construction 500cc Mini Sprint division. The 14 year-olds diced at the front of the pack all race long before Shawn McPhee took the victory. Kevin Smith rebounded from issues in hot laps and his qualifying heat to drive from 12th to third place. Joel Belanger and Cody O’Brien were next in line.

Devil’s Bowl Speedway is back in action on Sunday, June 2, as Mike’s Fuels Night continues from where it left off before being postponed by rain on May 19; the event will begin with the third Sportsman Modified heat, along with features for all five weekly divisions and qualifying heats for the Limited Sportsman, Super Stock, and Mini Stock classes. Ticket stubs and wristbands form May 19 will be honored on June 2, or at any event with regular admission pricing during the 2019 season. General admission is $12 for adults, $10 for seniors (62+), and free for kids 12 and under. Racing begins at 6 p.m.