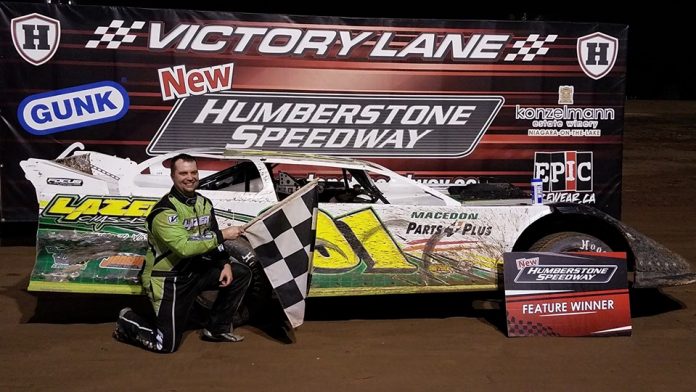 The inaugural visit from GRIT Racing Series for the Sportsman was race number one of the 2019 Hoosier Racing Tire Wild West series with Brad Rouse and Ray Bliss Jr on the front row with Bliss taking the lead. Rouse would take the lead on lap two and would start to pull away from the field. With Rouse showing the way, Chad Chevalier, James Michael Friesen and Jay Mallory all raced hard inside the top five most of the race. Mallory would move into second with 10 laps to go and would start to cut into Rouse’s lead. Rouse would lead all 30 laps to earn the checkered flag. The GRIT Racing Series returns to Humberstone on Sunday, July 21.

For the first time in several seasons, the NY6A Micro Sprints Tour returned with Ivan Forney leading the way in the 20-lap A-Main. Danny Knoll Jr and Eric Wise battled for the fourth position for several laps. Nate Hendrix would take the lead away on lap 18 and would go on to score the feature win.

2019 saw the creation of the Can-Am Thunder Stock Challenge for the JC Auto Thunder Stocks in a partnership between New Humberstone Speedway and Ransomville Speedway. Dave Bailey used his pole position to take the lead in the 30-lap event.  Bailey continued to show the way over Jason Fontaine, Cory Sawyer, Billy Bleich Jr, and Brian Monahan. At the end of the 30 -lap event, it was Bailey in for the checkered flag, his second of the season at New Humberstone. Race number two of the Cam-Am Thunder Stock Challenge will take place on Friday, July 26th at the Ransomville Speedway.

The first 20-lap feature for the Pro Fabrication RUSH Late Models feature saw Jeff Dayman and Adam Ferri bring the field to the green with Ferri taking the lead. Chad Homan raced with Dayman for second with Tim Gillespie and Sam Pennacchio racing inside the top five. Ferri would lead all 20-laps to earn the win.

The nightcap feature for the Pro Fabrication RUSH Late Models saw TJ Downs lead from his outside pole position to lead early on. 2018 All Canadian Championships winner David Pangrazio would take the lead away from Downs and would appear to check out on the field. However, lap traffic would give Chad Homan the opportunity to reel in the leader and complete the pass exiting turn two to take the lead and would go on to score the win in the second feature.

Chris Laskey and Mike Sarantakos brought the Glo & Go Tanning Mini Stocks to the green flag with Sarantakos showing the way. Jay Moulton went three-wide to move into second and took the lead away. Moulton pulled away as Craig Vlasic moved into second. Off a lap nine restart, Moulton, Vlasic, and Leroy Buscumb pulled away from the field. After a late race restart, Vlasic started to challenge Moulton for the lead. Vlasic used a last lap pass to pick up his second win of the season.

Mitch Dumont used his outside pole position to take the lead away to start the feature event for the Airhardt Deliveries Pro 4 Trucks. With Dumont out front, Dylan Llord moved into second place. A late race caution bunched the field up as Llord and Dumont pulled away from the field. Llord would go on to score his second straight feature win.

NEWS AND NOTES: The make-up Sportsman feature from Opening Night has been scheduled for Sunday, June 9. 97 cars signed in pitside for the 6-division show.

Next Sunday, June 2, Harvey’s Swiss Chalet of Port Colborne presents the Bob Deswiage Memorial. The 602’s on 6/02 night will feature the annual visit by the BEI Lightning Series and the first visit of the season by the Action Sprint Tour presented by Race Rivalz. The Thunder Stocks and the first King of the 4’s combined race for the Pro 4 Trucks and Mini Stocks will take place. Showtime is at 6:30 pm. All kids in attendance can check out the activities with the Humbee’s Kids Club presented by the Port Colborne Dairy Queen happening at 5:00 pm each race night.