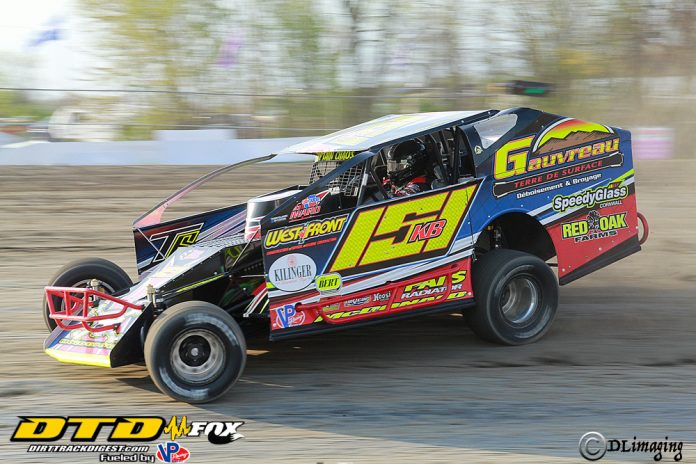 CORNWALL, ON – The Cornwall Motor Speedway presented his second program of the season as they hosted the Lightning Sprints in town for their first of 3 visits at the speedway along with a complete race program presented by the Co-Operators.

Kevin Hamel charged to the lead in the 30-lap Loud and Dirty Modified feature with
Brian McDonald and Chris Raabe. Hamel broke a shock on his ride and McDonald took
the lead on lap 8 with Raabe and Wheeler the top 3. McDonald got into heavy traffic by
midway as Raabe and Luke Whitteker joined the lead pack. Whitteker had a good ride
has he passed Raabe for second with 7 laps to go and set sights on McDonald.
Whitteker’s ride let up with 3 to go. McDonald let the final laps to win his first of the
season.

In the Next Level Home Improvement Sportsman feature, Johnathon Ferguson to the lead
with Ryan Stabler quickly moved to second and John Mills in third. On lap 8 restart,
Stabler to the lead with Ferguson and Shane Pecore to third. A few cautions slowed the
field down and Stabler was able to remain first with Pecore trying to make his move.
Jessie Hudson brought the red on lap 21 as he landed on his roof, on the next restart,
Pecore had a good jump and took the lead with Stabler in second, Pecore led the final
circles to win his second in a row.

Yanik Poirier took the lead in the 25-lap Lightning Sprint over his son Jordan and Pascal
Levesque. On a lap 2 restart, Jordan Poirier to the lead with Mathieu Bardier in second
and Yanick Poirier. The feature picked momentum as they quickly got to halfway point
with the leaders within lap traffic, Bardier was able to get closer to Poirier. Jeffrey Weare
brought caution with 3 laps to go. Poirier led the final laps to win over Bardier and
Yanick Poirier.


In the 25-lap Alexandria Home Hardware Pro-Stock feature, Stephane Lebrun jumped to
the lead with Rock Aubin and Marc Lalonde in third. Aubin to the lead on a lap 5 restart
and pulled away from the rest of the field with Lebrun holding on to second. Aubin lost
his big lead as his car let up with 5 laps to go giving back the lead to Lebrun. The veteran
driver led the final laps and got his second win in a row.

The Tracy Wheeler Assist2Sell Mini-Stock was the first feature on the speedway, Chris
James took the early lead over Yanik Potvin and Marc Dagenais. Justin Jodoin was on the
charge as he found something on the outside moving up to second by lap 4 but got too high and lost some grounds. At halfway point, Marc Dagenais took the lead using the
inside lane. Dagenais in front over Mike Gaucher and Alexis Charbonneau. Jodoin had a
quick ride and took the lead and never looked back to win his first ever feature win.
Sprint Car fans will be pleased for a second week in a row as the Empire Super Sprints
will make their annual trek to the speedway net Sunday along with a full program, the
Pro-Stock will have the night off.