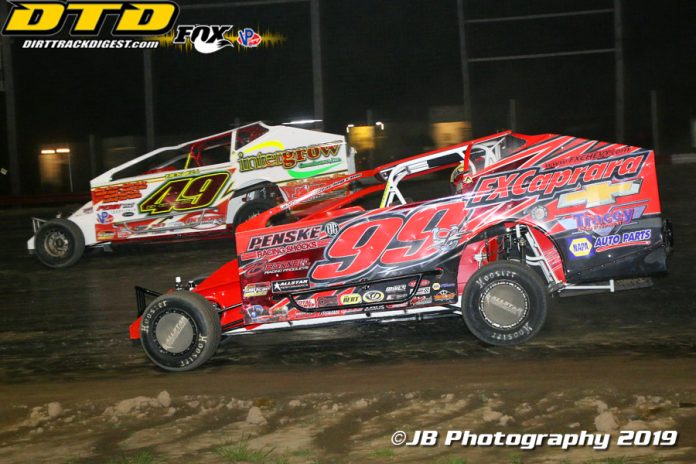 VERNON, NY –  Billy Dunn got his DirtTrackDigest.com DIRTcar 358-Modified title defense off on the best possible note as the Watertown, N.Y., driver the claimed the win in the 30-lap feature on opening night at Utica-Rome Speedway.  Also claiming wins on Broedel Fuel Group and VP Racing Fuels Night were Matt Tanner with the Lucas Oil Empire Super Sprints, Matt Janczuk in the VP Racing Fuels Summer Shootout Series for the Broedel Fuel Group DIRTcar Sportsman, Nick Stone in the Ted’s Body Shop DIRTcar Pro Stocks and Payton Talbot in the Bernie’s Extreme Performance Parts Rookie Sportsman.  When all was added up, 124 cars filled the pits for the season opener.

Dunn and Larry Wight brought the 24-car 358-Modified feature to the green flag.  Wight was able to snag the lead at the start by rolling the outside of turns three and four with Dunn working the bottom.  Wight and Dunn showed the way early with Erick Rudolph in tow.  They were the top three when the caution was needed on lap eight as Lucas Heintz spun in turn two.

On the restart, Dunn got a great run going into the corner.  He drove by Wight through turns one and two in order to take over the lead.  Wight chased him into turns three and four, but he didn’t have enough to get back by allowing Dunn to set the pace on lap nine.

Dunn, Wight and Rudolph remained the top three.  They stayed tight together as the laps clicked off.  Dunn’s pace was strong as he entered traffic on lap 18.  This allowed both Wight and Rudolph to close in.  Rudolph started applying heavy pressure to Wight while he closed in on Dunn with 10 laps to go.

Dunn was perfect in traffic allowing him to hold off both Wight and Rudolph as he claimed the victory.  Wight just beat Rudolph to the line to finish second.  Rudolph was forced to be happy with third.  Pat Ward finished in fourth with Lance Willix rounding out the top five.

“What an awesome car,” said Dunn after the win.  “We had a slow start to the season here weather wise but every time we’ve raced we’ve been on the money.  I had a really good time racing with Larry.  I don’t get to race much with him.  That was a lot of fun and I’m glad we came out on top this time.”

The VP Racing Fuels Summer Shootout Series for the Broedel Energy DIRTcar Sportsman was finally able to hit the track after being washed out the prior two attempts.  The 30-lap race started with Dave Moyer and Chris Mackey on the front row.  Mackey was able to get the initial lead at the green flag.  He made his move on the outside of turns one and two to get the number one spot.  He held the lead for just circuits before defending track champion Matt Janczuk quickly took over the position.  Janczuk rocketed around Mackey on the outside of turns three and four.

Once out in front, Janzuk pulled away from the field.  With Janczuk dominating, Alan Fink and Mackey began wrestling for the runner-up position.  They swapped the spot multiple times before Fink finally took the position on lap 25.  He didn’t have enough time to catch Janczuk as he went on to claim the victory.  Fink crossed the line in second while Mackey finished third.  Matt Steffenhagen finished fourth and Kyle Inman finished fifth after starting 10th.

Pete Stefanski started on the point of the 20-lap Ted’s Body Shop DIRTcar Pro Stock main-event.  Stefanski jumped out and led lap one before Travis Welch went around him on the outside of turns one and two to take the top spot on lap two.  The pair battled before for the lead while fifth starting Nick Stone entered the fray a few laps later.   Welch worked the middle lane while Stone kept pace on the outside.  Stone was finally able to make his move on lap 12.  Stone went to the outside of turns three and four to grab the lead.  From there Stone opened up the lead on the rest of the competition.  Welch was forced to then contend with Josh Coonradt.  Coonradt was able to get around Welch with only four laps to go.  Stone went on to claim the win.  Coonradt, is his first Utica-Rome start, finished second followed by Welch, Pete Stefanski and Mike Welch.

Payton Talbot capped off the night with his first Utica-Rome Speedway win in the Bernie’s Extreme Performance Parts Rookie Sportsman 15-lap feature.  Talbot started fifth in the field. He quickly made his way to the front to challenge the early leader Ed Lukas.  Talbot made the move on lap nine to earn the top spot.  He went on to lead the final six laps for the win.  Tucker O’Connor finished in second with Ed Lukas, Brian Dolbear and Alexis Jacobs completing the top five.

Pit gates on Sunday will open at 2 pm while spectator gates swing open at 3:30 pm with the heat races beginning promptly at 6 pm for opening night. Adult general admission for the event is set for $15, Senior/Military/Students are $13 while kids 16 and under are free. Pit admission for the night is $30 for DIRTcar members and $33 for non-members.