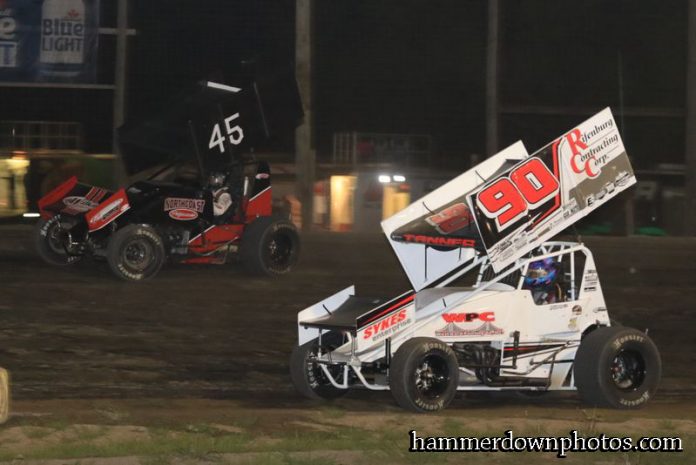 VERNON, NY – Matt Tanner always looks forward to the Lucas Oil Empire Super Sprint stops at the Utica-Rome Speedway. The Stephentown, N.Y., admits that the slick half-mile is his favorite track on the schedule. He came into Sunday night with three series wins at the facility. On Sunday night he left with his fourth.

Tanner was methodical in working to the front after starting in the eighth. Tanner first appeared into the top on lap seven before moving into second on lap eight. A lap later he was able he able to wrestle the lead away from Chuck Hebing. They remained the top two with Danny Varin entering the fray late. At the checkered it was Tanner taking the E&V Energy, NAPA Auto Parts and Mach 1 Chassis A-Main feature win.

By setting fast time in his time trial group, winning his heat and then the A-Main, he won the Wick-edly Sent Triple Crown which was worth $500.

“It’s been a struggle this year,” said Tanner after the win. “We blew the motor up the first week and bent this car last week. This is someplace we always circle on the calendar. We can’t wait to get back here. Bill and Kim (Shea) do a great job with the place. I wish they’d run Sprint Cars every week.”

Josh Pieniazek shared the front row with Dylan Swiernik for the start of Sunday night’s weekend finale. Pieniazek won the race off of four at the start to assume command of the opening circuit. His time at the front lasted just three circuits.

On lap four Shawn Donath went to the extreme outside of the speedway in turns three and four to snag the lead away from Pieniazek. He rode the top rim of the speedway to keep the lead before the yellow was needed for a car stopping on the speedway on lap six.

Donath was joined by Hebing on the front row for the restart. Hebing got the better of him in turns one and two to have his opportunity at the top spot. He worked the high-line as Tanner now entered into the mix. Tanner found his groove on the very bottom of the track allowing him to quickly close in on Hebing.

Nine laps were complete as Tanner tucked under Hebing in turns three and four. Tanner couldn’t have gone any lower on the speedway while Hebing was as far around the outside as he could get. Tanner’s line proved to be the right choice as he beat Hebing to the line.

“You had Chuck out front and any time he’s out there you know he is going to be tough to beat,” stated Tanner. “I just got a really good restart there and go around Shawn. I didn’t think I would get around Chuck that quick. I figured he’d make me work for it. I found something on the bottom.”

Tanner and Hebing continued to keep up the pace while Varin worked high and low to get to them from the 10th starting position. They were the top three in the running order when the caution came out on lap 15 for safety as Pieniazek did a complete 360 spin in turns three and four while running in the top 10.

The final green flag run came down to Tanner and Varin. Tanner got away as Varin worked over Hebing for the runner up spot. He finally secured with on lap 22. By that point Tanner had enough of a lead to take him the $2,000 feature win.

Varin came home in second for his second podium finish of the weekend as he always finished second on Friday night at the Brewerton Speedway.

“We had a really great car tonight,” mentioned Varin. “These are two great drivers, and there are more than two in this group. These guys are very, very good. It’s fun to race with them. We just came up short tonight.”

Hebing held on to finish in third. All weekend long the veteran driver from Ontario, N.Y., had a strong car early in the feature before losing the handling late in the go.

“We are really good car early in the race right now, but we have to figure out the laps 10 to 15 when the tires get hot on me,” stated Hebing. “That’s what happened last night at Fulton also. The car is fast. We just have to fine tune it. Both of these guys are really good here.”

Cory Sparks advanced from 12th to finish in the fourth spot while Paulie Colagiovanni scored another top five run in fifth. A field of 31 sprints were in the pits on what turned out to be Opening Night for Utica-Rome.