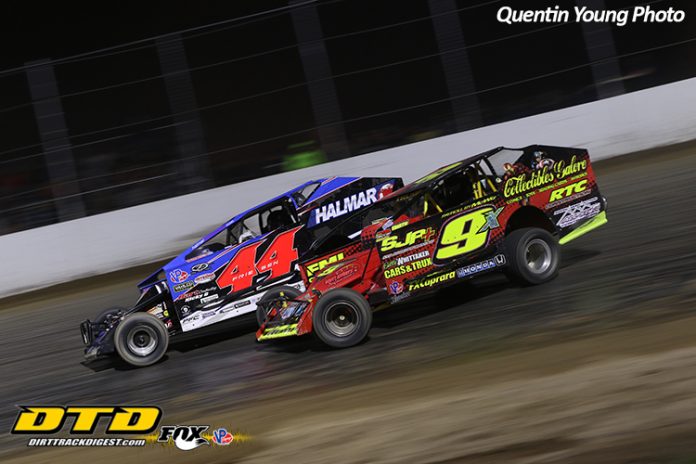 A couple of years ago Todd Root and Tyler Trump were running in the Sportsman divisions at Central New York race tracks.

However, on Monday they had their under powered and “50 pounds added” 358’s at the Super DIRTcar Series event at the Weedsport Speedway. They along with several other 358 drivers were determined to make the field, but in the end those were the only two of the littler guys to get in the century grind.

It ended up with mixed results for the duo as Root finished in ninth in his first ever Super DIRTcar Series start while Trump, in his second SDS race of the year, came home a lap down in 27th.

Todd was quite confident in his effort as he said, “I expected to finish in the top 10 and now I know what we need to have to come back. I got a little sideways late in the race and a couple of the restarts got a little hairy, but the car felt good and I was confident.”

Root and Trump surprised as, after a good time trial, each started in the second row of their respective heats and though they didn’t make the draw they finished in the top four to get a guaranteed spot in the main event.

Todd said, “The time trial was the key for us tonight. We made some changes to free it up between hot laps and time trials. I was a bit nervous with the crowd I was around.”

The big-block guys “around” him included Stewart Friesen, Jimmy Phelps, Tim Fuller, Tim Sears Jr. and the Doctor thus providing a few obstacles for the small-block.

Root said, “I didn’t think I had enough to run with them, but I am happy with the outcome” as he finished behind only Friesen and Sears.

Trump got into the SDS show earlier this year at Can-Am, but said, “I wanted to qualify in a heat and finishing fourth was great as we didn’t want to go home early” as he trailed Mike Mahaney, Billy Decker and Pat Ward.

There was a late race near mishap as the 9x and Ryan Godown made contact out of two as Tyler said, “Yaeh, I guess he nicked me a bit.”

However, there was also a memorable moment in his heat that he was all smiles about afterwards.

“I passed Billy Decker and it was really something that surprised me. I was side-by-side with him in the backstretch, but I didn’t dare pull down in front of him because I really wasn’t sure I had passed him,” said Trump, “ I am good friends with him and I didn’t want to cut him off.”

Reflecting on the heat he explained, “I got a little loose the last two laps and I was hugging the bottom. I had to be slow and smooth. It would be nice to finish in the top 15, but making the show in the heat in important to us.”

Both drivers have advanced their racing careers after the 358 division was installed at the Fulton Speedway a year ago. The two have evolved into competitive Modified drivers and running in the Weedsport SDS show on Memorial Day was a good way to keep their momentum going.