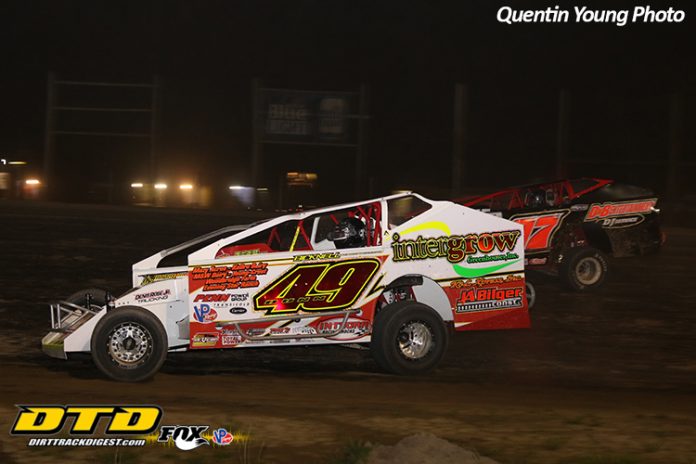 When I drove away from my full-time job last Friday to begin a three day weekend with four nights of racing action I just knew it was going to be a fantastic holiday weekend. Four nights of Sprint Cars at four different tracks all within an hour and fifteen minutes of my home was enough to get my heart pumping. The schedule also included two nights of DIRTcar 358-Modifieds, two nights of big-block Modifieds, DIRTcar Sportsman, plus some full-fendered action on three of those nights. There were outstanding car counts at all four tracks to please the fans.

Thanks to the cooperation of track promoters with the Lucas Oil Empire Super Sprints all three of their events were completed. Each one was pretty great, and each one had its own story to tell. Friday we saw an uncharacteristic crash in hot-laps by the Cobra (Chuck Hebing), who was forced to unload his back up car to finish the night. Starting near the rear of the stellar A-Main field he had to earn his wages. Hebing rallied from the rear to finish a solid fifth.

Another veteran, Steve Poirier, hit an infield tire during his qualifying heat ending his march toward the front. Starting scratch in the B-Main with his back up car didn’t help his chances to make the big dance. He was unable to overcome his woes and had to regroup for another day.

Jason Barney was the first across the finish line when it counted, winning over Danny Varin and Davie Franek on his home turf.

RD III, also known as Ronnie Davis III, began his rookie season in the big-block Modified division at Brewerton to year. Smooth consistent laps secured the win for a man who has proven he can win at every level in the modified type chassis’. Other results for the other divisions can be seen in the official press release here on Dirt Track Digest.

Saturday we were under a constant threat of heavy thunderstorms so the team at Fulton Speedway worked with ESS to push the show along, forgoing a Dash for Cash and B-Main. It paid off for the Sprint Car teams as they were able to complete their 25 lap A-Main before the deluge eventually hit. Lightning Larry Wight worked to the front and began a dominant march to victory lane in the fast paced A-Main. As he was exiting his car to celebrate the win with his team and family, the crowd in the grandstands was hurriedly exiting. I wonder what went through his mind when he saw the grandstands emptying out just before ESS announcer Mike Mallet explained to him the storm was upon us. (During Larry’s cool down lap the announcers asked the crowd to take shelter out of the aluminum grandstands because lightning was striking near the speedway). So, as Lightning Larry celebrated a dominant win in his Sprint Car, nature was putting on a lightning show to the immediate west.

The rest of the event was done due to the massive flood that fell from the sky. My hat is off to the track, first for getting that far into the show; second, for putting the fans safety first; and lastly, for making the track shuttle available for people to ride to the parking lot as the remaining rains had so many people huddled in the concession area.

Sunday Utica-Rome FINALLY had some great weather, and a jammed pit area for their season opener. The Lucas Oil ESS Sprint teams brought out more than 30 cars, with a full field of DIRTcar 358-Modifieds, 45 DIRTcar Sportsman for the VP Race Fuels Summer Shootout Series and 18 Pro Stocks. Being a holiday weekend with no threat of ugly weather we were able to enjoy taking time to get the show in with a brief intermission for the fans. On this night Matt Tanner grabbed the win in the caution free ESS A-Main at one of his self proclaimed favorite tracks. Billy Dunn defended his 2018 Modified track championship by claiming the first win of 2019 in that division. Matt Janczuk also gave a convincing defense of his 2018 title as he ran away and hid in the 30-lap VP Race Fuels Sportman feature, winning by a straight away.

Monday as we remembered the sacrifices of the brave soldiers, sailors, and airmen that died establishing and protecting our freedoms I was off to the Heroes Remembered 100 at Weedsport. 52 Super DIRTcar Series Modifieds, somewhere around 55 DIRTcar Sportsman and a full field of CRSA 305 Sprints filled the pits. When the dust settled Eric Rudolph was crowned the winner of the Super DIRTcar Series Heroes Remembered 100 lap Modified feature. Darryl Ruggles drove his potent Sprint Car to another Weedsport victory in the CRSA A-Main, while Austin Susice drove his DIRTcar Sportsman to his first Weedsport Speedway victory in only his second start at that facility.

A lot of great people participated in so many ways to produce the highest quality racing available that it would be impossible to name them individually. However, I can say how truly blessed we are to live and race in this area because of them.

When I looked back at the celebrations, memorials, and tributes paid to our fallen heroes over the weekend I am truly moved by the patriotism we find within the dirt track racing community. It takes me right back to the goodness of God. He created us with a certain level of dexterity to reinforce our beliefs, and to defend His righteous cause, even when we’re unaware of it.

Kings He established over ancient Israel always found ways to recall the great things God did for them, as is expressed through Asaph in this passage from the Book of Psalms.

The goodness of God is displayed in His own memory. He is quick to remember the promises He made to His children, which in some biblical language are called covenants.

God is also quick to forget, or show a lapse of memory to our benefit, as He declared by speaking this though the prophet Isaiah.

“I, even I, am He who blots out your transgressions for My own sake; And I will not remember your sins.
Isaiah 43:25 NKJV”

God said the same thing to the New Covenant church in Jerusalem in the first century after Christ when He spoke through the author of his letter to the Hebrew church.

“For I will be merciful to their unrighteousness, and their sins and their lawless deeds I will remember no more.”
Hebrews 8:12 NKJV”

For us, it’s always a good thing to recount all of the blessings God provides for us. It reminds us of His goodness, and gives us greater faith for better promises to be fulfilled in our lives.

For God, it’s His nature to remember and keep His promises to us. To discover what they are we only need to read through the covenants He established with our biblical patriarchs. It’s also His nature to forget all of our sins when we humbly lay them down at the foot of the Cross. There’s no greater hero to me than my God, who forgives all our iniquities, Who heals all our diseases (see Psalm 103), when we wholly trust in Him and stand on His promises. That’s worthy of celebration. Count your blessings, there are a lot more of them in store for you than you could imagine.

“…as it is written: “Eye has not seen, nor ear heard, Nor have entered into the heart of man The things which God has prepared for those who love Him.”
I Corinthians 2:9 NKJV”

We’re always available to help you discover the hidden treasures of a dynamic personal relationship with God. We can be reached by email at flchaplain@windstream.net, or on Facebook at Finish Line Chaplain. It’s our joy to serve you.