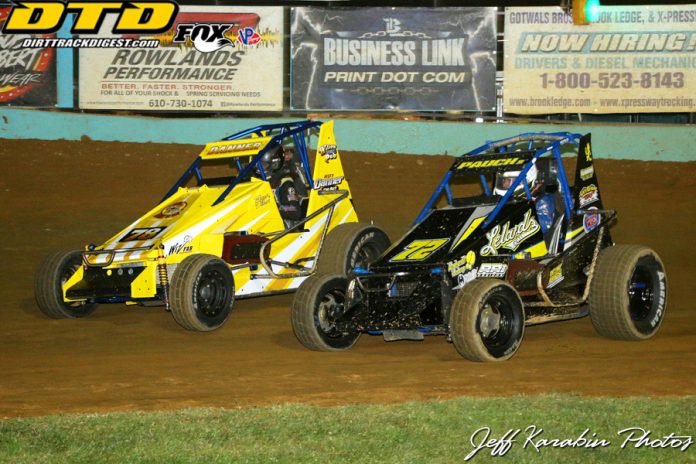 KUTZTOWN, PA – There were fireworks in the sky and fireworks on the race track on Memorial Day  Monday, May 27, as Championship Energy Action Track USA (on the Kutztown Fairgrounds) finally completed a racing program in 2019.

When the event sponsored by Business Link Print in Kutztown was complete, a couple of drivers were smiling broadly in victory lane. Billy Pauch Jr., from Milford, NJ, scored a pair of victories with wins in the USAC All Pro SpeedSTR main and in the King of No Wing Showdown, a 40-lapper for the Hyper Racing, EVO Injection 600 Sprints. The All Star Slingshots made up their feature that was rained out on May 19, with Dylan Hoch picking up career win No. 10 at the Kutztown oval. In the nightcap, Hoch once again ruled the roost,. notching career win No. 11, extending his lead as the all-time leader in Slingshot victories at Action Track USA. Hoch is currently on a three-race win streak, as the two wins on Monday evening followed up his Sunday night score at Lanco’s Clyde Martin Memorial Speedway.

Tim Buckwalter dashed to the early lead in the USAC All Pro SpeedSTR main, leaving Briggs Danner, Pauch Jr., Trevor Kobylarz (making his first start in a SpeedSTR), and Ohio’s Matt Westfall to slug it out for the runner-up spot. On a restart with eight tours complete, Danner threw a slide job on T. Buckwalter to snatch the lead away from the No. 52, and Pauch Jr. also slipped past Buckwalter to grab second place.

The next restart, with nine circuits in the books, saw Pauch Jr. squeeze up in front of Danner to become the race leader. Tim Buckwalter held on to third, and Kobylarz traded sliders with Steve Buckwalter in a scuffle for the fourth position.

During the middle stages of the 30-lapper, Danner threw everything he had at Pauch, but Billy Jr. was up to every challenge. A caution period with eight to go had Pauch on top with Danner, S. Buckwalter, T. Buckwalter, and TJ Mayberry making up the top five. As the green waved again, Tim Buckwalter fired off the high side of the banking, sweeping past two cars and into the runner-up slot. Danner quickly reclaimed that position and continued his pursuit of the leader. Over the final few frantic trips around the oval, Danner tried shoving the nose of his No. 78 under the Heffner Motorsports/ Lelands.com No. 72, but Pauch fended off the attacks and went on to win by 0.214-seconds over Danner. The triumph is a division leading 16th career SpeedSTR win for “the Kid’s Kid” at the Berks County oval.

Tim Buckwalter battled his cousin right down to the wire before finishing third, with Steve settling for a fourth-place payday. TJ Mayberry rounded out the top five.

The King of No Wing Showdown for the Hyper Racing EVO Injection 600 Sprints produced the first two-time winner of the event, and Billy Pauch Jr. also made it two in a row in the 40-lap main that paid $1,000 to win (with Gambler’s fee).

Kenny Miller III shot to the lead on the initial start, with Billy Koch fighting him for the top spot in the early going. Pauch wheeled the LHS Racing Engines No. 91s to second on the fourth trip around the clay with Koch, Alex Bright, and Colin White joining him in hot pursuit of the high flying race leader in the No. 23m.

From laps eight through 13, Miller and Pauch engaged in an enjoyable slide-fest, swapping the point several times before Pauch took command by sneaking to Miller’s inside in turn one instead of throwing the slide job that Miller was anticipating. Great racing took place throughout the field as the laps clicked off, with Brian Carber now challenging White for fifth. Before long, it was a four-car skirmish for second between Miller, A. Bright, Carber, and White. A final restart with four revolutions left to run saw Bright dart past Miller for second. Alex could draw close to Pauch, but he could not muster a serious bid for the lead over the final few circuits. When the checkered flag ended the fast and furious 40-lapper, it was Pauch Jr. winning his second straight King of No Wing Showdown over A. Bright, Miller, White, and Carber.

The evening began with a make-up feature for the All Star Slingshots. The 30-lap affair was rained out on May 19, and it actually became the first feature race of the 2019 campaign at Action Track USA.

Justin Thompson set the pace for much of the Business Link Print main event, but a yellow flag with nine laps remaining proved to be his undoing. Mertztown, PA’s Dylan Hoch skated past Thompson on the restart to snare the top spot, and he drove to the victory in front of a packed grandstand. Thompson held on for runner-up cash, and Dakota Kohler survived a nearly race long duel with Dave Carraghan to finish third. Carraghan, in his first ride as part of the Hoch Motorsports camp, wound up fourth and Brett Bieber crossed the stripe in fifth.

In the night’s final feature, Hoch once again flexed the muscle of his No. 35, leading all the way after starting on the pole. Jared Silfee, the defending Slingshot champion at the speedway on the Kutztown Fairgrounds, chased Hoch all the way to the checkered, with Carraghan and Kohler switching positions from their battle in the first Slingshot main. And Brett Bieber finished fifth in this one, too.

A total of 122 race cars filled the pit area on Monday while fans concluded their holiday weekend by turning out in large numbers to watch the exciting competition at Action Track USA. There were 28 SpeedSTRs, an astounding 67 of the 600 Sprints, and 27 Slingshots on hand.

Billy Pauch Jr. started his two-wins-in-one-night holiday celebration by setting quick time (11.861-seconds) for the SpeedSTRs in their timed dashes. Steve Buckwalter, Briggs Danner, Trevor Kobylarz, and Tyler Ross made up the “Fast Five”, with Pauch and S. Buckwalter locking themselves into the 30-lap feature.

The massive field of 600 Sprints necessitated a schedule of seven heats, two D-Mains, a pair of C-Mains, and a B-Main to whittle down the entries and see who would start the lucrative King of No Wing Showdown.

This Sunday, June 2nd, is highlighted by not one, but TWO feature races for the Hyper Racing EVO Injection 600 Sprints – both of which will be contested over a 35-lap distance. The first feature will follow a B-Main that was rained out on May 19.

The SpeedSTRs, All Star Slingshots, and Junior Slingshots join the SpeedSTRs on June 2nd, with warm-ups getting underway at 6:05 p.m. Qualifying activity will begin right after warm-ups and the National Anthem.

Sunday, June 9 will find the SpeedSTRs in the spotlight. A sizzling line up that also features the 600 Sprints and All Star Slingshots has the SpeedSTRs competing in the Flying Farmer 40, a race that pays $3,000 to the winner. Race time is the same as the June 2 event.

June 12 will be the first Wednesday night event of the season, and the track will stick with its traditional midweek schedule for the rest of the season. June 12 is First Responders Night and the SpeedSTRs, 600 Sprints, and Slingshots are all slated for action.