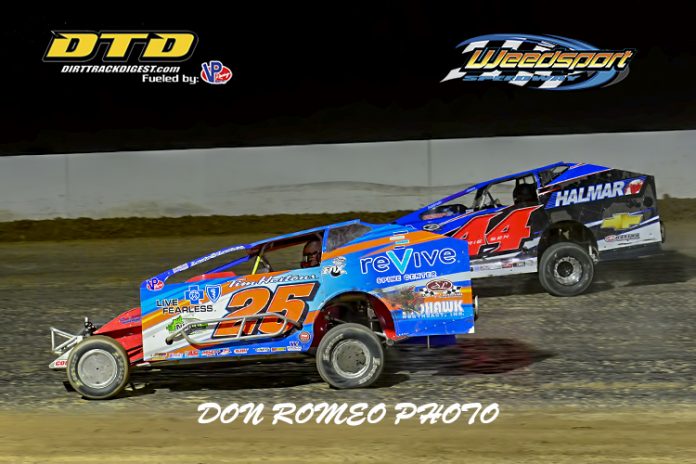 There is something about Weedsport Speedway that is a fit for Modified driver Erick Rudolph. The Ransomville, N.Y., pilot always seems to find his way to the front of the pack whenever teams hit the slippery third-mile oval.

He captured the win last July in the Hall of Fame 100 for the Super DIRTcar Series before backing it on Sunday night with his second consecutive series triumph in the Heroes Remembered 100.

“I don’t know, but I wish I had the answer to it,” said Rudolph when asked what has made his team so good at Weedsport. “This is the same car we run everywhere. We run well everywhere, but when we come here we do better. We are always consistent. We pride ourselves on being consistent and having a chance at it. For whatever reason when we are here our chances are that much better.”

On paper, Monday night’s win goes down in the history books as green to checker domination, but that description couldn’t be further from the truth. Rudolph was solid in the open track. He could run his preferred line. On this night, traffic was not his friend. In the early portions Max McLaughlin pressured him before a push from Stewart Friesen came into play in the later stages.

“The way I was running the track tonight it required a lot of room,” mentioned Rudolph. “When I got to lapped traffic I struggled a bit. As long as they weren’t where I was running it wasn’t a problem. It worked out. If it didn’t it would be really upsetting. I know the caliber of competition that is here. When you know you aren’t lapping cars you know someone is better than you are.”

Some was definitely coming in the form of Billy Decker. Decker brushed aside Friesen with only a handful of laps left before threatening Rudolph. He nearly got alongside of him far enough at the checkered flag to steal the win. Rudolph made one move a lap prior that was the difference maker in the race. Rather than work the higher lane in traffic he tucked under a lapped car forcing Decker to hesitate, if only of a moment.

“I knew they were getting close,” said Rudolph. “I was stuck behind the same lapped cars for at least 10 laps. I knew that was not the thing to do. If you are passing lapped cars you are putting more cars between you and the next guy. I wasn’t doing it anymore so I was getting pretty nervous. I was hoping the race was going to end really quick. I scooted by one, but even then I still I knew someone had to be close.”

Decker was close, but not quite close enough to get it done.

Friesen Fast on the Long Run

Stewart Friesen admits that Weedsport Speedway one of his best tracks even though he always seems to find a way to get his Halmar Racing No. 44 to the front of the field. He’s a multi-time series winner at the facility and he had Rudolph within his grasp only to fall short at the end.

“At one point we were rolling up on Erick and he was struggling in traffic a little bit,” commented Friesen. “I could slide by the lapped cars a little bit quicker than him at that point. The tires were underneath me at that point.”

For Friesen his night was determined by longer green flag runs. The longer the race stayed up to speed the more maneuverable his DKM Chassis got. A caution on lap 76 hurt him and it took him too long to get things rolling again. By the time he did Decker had already gone on by for second.

“Our car was really good on long runs,” cited Friesen. “It was weird. He’d jump out on those restarts a little bit. It was tough. The tires were so finicky. You spin them and it would take you a couple laps to get them back. I don’t know if they’d overheat or you’d seal them up, but it took a couple laps to get them back underneath you. Billy Decker is like the master of keeping his tires underneath him.”

He ended up losing second to Decker late to finish third. Or as he put it, “If I wasn’t an idiot and followed the lapped car I probably could have got a second out of it.”