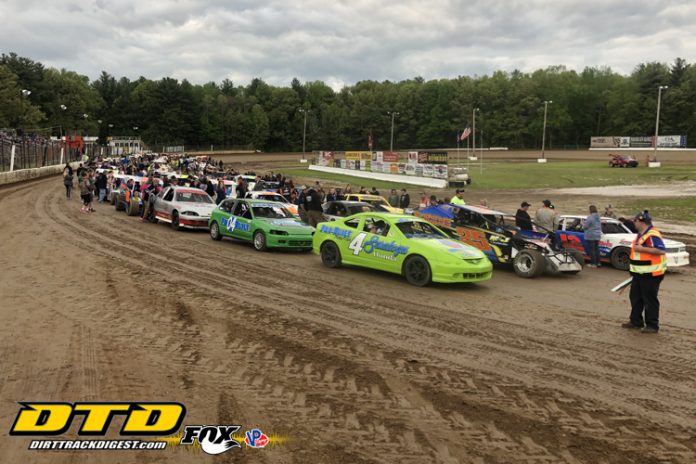 Friday night at Albany-Saratoga was the start of our Memorial Day Weekend racing and the night’s activities began with the annual Kiddie Rides. We talked with Pro Stock driver, Dean Charbonneau in his pit area. For the first time in his 40 year racing career Dean is running for points this year. A racing career that started when he was 16 years old racing Street Stocks. Prior to that he raced go-carts and says he remembers racing with Don and Joanne Davies’s son Brian before he left for the NASCAR world. Dean’s first two weeks at Malta someone spun in front of him and Friday he was hoping that trend had reached its end. Next we stopped by the Don Mattison pit area. Don is always great to talk with because he truly enjoys what he does and says he races at the level he can and doesn’t begrudge anyone for having more in their car than he does. Don says he feels the best when he can beat those with more that his $5,000 self built motor in his No. 10 Modified. “If I can be competitive and bring the car home in one piece, says Don, that’s a good night for me.”

Mike Mahaney is now behind the wheel of the George Huttig No. 35 and has been to the Great Race Place a total of eight times. George has been a supporter of motorsports for many years and took the past few years off when his long time driver, Mike Perrotte took the DIRTcar job as series director. It appears he has found a great fit for his potent Modified.

Second generation racer, Montgomery Tremont has been experiencing a season of firsts in his second season of racing. “It’s the first time I clipped a car and the first time I flipped,” said the young Tremont in the pits on Friday after he flipped his No. 115 Limited Sportsman four times during the heat race. John Napoli was busy putting a tire on his No.3 Four Cylinder when we spoke to him. Although he usually drives his own car, on Friday Jim Bleau was behind the wheel helping get the car tuned up for the Ray Galusha Memorial Race paying $400 on June 7 at Albany Saratoga. Jim was roaming the pits when we shot this photo. Later in the weekend, John Napoli picked up his first career win at Glen Ridge on Sunday.

Last week’s events at Fonda reminded us of days of ole, not only in the stands but also in the pits. For many years it was custom, if someone needed a ride another team would loan them a car. Last Saturday Mike Maresca was involved in a tangle that left his No. 24 out of commission for the night and the Palmer Race Team offered him their small block car for the feature. It was St. Lawrence Radiology night, Maresca’s sponsor, so it seemed important that he make the feature. Alton and Carole Palmer stepped up and offered. On Saturday at Fonda we met Brexley Grey Hartman 8 month old daughter of Tim Hartman, Jr. and Jessica Pacquin. On Sunday Tim won the STSS Sportsman event at Thunder Mountain and also qualified Jim Becker’s No. 9 Modified for the feature, finishing 19th. It was quite a weekend for the Hartmans.

Once again this week a couple outsiders came to Fonda. Jimmy Horton and Mike Gular were in the pits, unfortunately fans only got to see them in hot laps and heats. Fonda has had a few outsiders this season, Billy Pauch came opening night and for one Fonda driver, Cody Bleau, it was a thrill being on the track with the legendary New Jersey driver. Cody said as we were on the track for hot laps he suddenly looked at the car next to him and realized it was Billy Pauch and he was in awe to think that he was actually racing on the same track. Cody drivers the beautiful No. 73 Modified owned by Laudy Hoyenga and maintained by him and his father. Each week Cody is improving and we see him in victory lane very soon.

After the rainout at Fonda and the grandstands cleared out we met a young man on a journey, one that began within weeks of his birth date in August 1990 at Pittsburgh’s Pennsylvania Motor Speedway (PPMS). His mother, Christina and father, Greg were attending PPMS when she went into labor after her favorite driver, Late Model chauffeur, Lynn Geisler broke a tie-rod going into turn one and hit the wall hard. His mom jumped up and stomped her foot and suddenly felt herself going into labor. She was rushed to the hospital and Corey was born the next day. He was born during a NASCAR race that his family was watching on TV and thus, Corey Simmons was born to love racing. Mark Martin was the winner at Michigan that day. From that day forward Corey had a goal, to travel to at least one race track in each of the 50 states. He has visited 29 states so far. “Rhode Island doesn’t have an active circle track, so I’m remaining hopeful that will change in my lifetime,” said Corey.

After his visit to Fonda on Saturday Corey went to Oswego and Thunder Mountain on Sunday bringing his total tracks visited to 128. He said, “I would return to Fonda sometime. It has such a proud, nostalgic feel to it and after visiting with Dave Lape at the Fonda Museum prior to the races, I gained a deeper appreciation for the history of this great speedway.” Glen Ridge finally got their first show in on Sunday night and we ran into a third generation Frank Twing racer, the eight year old grandson of Pro Stock racer Frank Twing who was behind the wheel of a Jr. Slingshot for his third time. He started racing in go-carts at the age of five when asked why he wanted No. 1 on his Slingshot he said he plans to be number one. Frank, Jr.’s long range plans are to move up to an open wheel Sportsman.