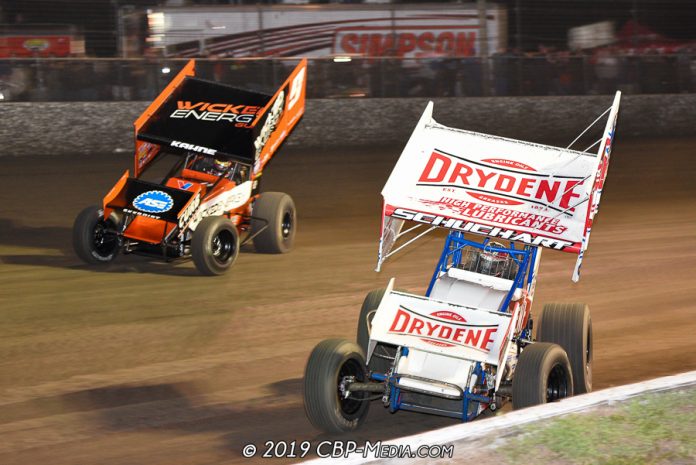 NASHVILLE, TN – The riffs of guitars and harmonics of pianos are ingrained in Nashville’s history, and soon so will the thunderous roars of World of Outlaws NOS Energy Drink Sprint Car Series.

The Series will make its Nashville debut on Friday, May 31, and Saturday, June 1, for the inaugural Music City Outlaws Nationals at the quarter-mile Nashville Fairgrounds Speedway.

The doubleheader race marks the first time the World of Outlaws will make laps around the quarter-mile track – located inside the half-mile speedway – covered in seven million pounds of dirt. It’s also the Series’ only stop in Tennessee this year.

While there are several new elements going into the historic weekend, drivers are excited for the new challenge.

“It’ll be fun,” said Tennessee-native Jason Sides. “It’ll be different for everybody because it’ll be some place we’ve never been. I know it’s a fun town. Hopefully we’ll have some good luck there.”

Sides Motorsports will field two cars for the doubleheader – one for Sides and another for California-native Tim Kaeding, whose ran seven races with the team, so far, this year. Sides said he would be pleased with having both cars in the top-five.

CJB Motorsports driver Shane Stewart has also expressed excitement for the race. He’s also entering the weekend with the momentum of a strong top-five run at Lawrenceburg Speedway on Monday.

“We’re excited to get to Nashville,” Stewart said. “Excited to be a part of that. Anytime we can dip into a new market, a new venue like Nashville — there’s been a lot of hype about it on social media, I think there’s going to be a big crowd there.”

“The market is great,” Schatz said. “Everybody is talking about going to Nashville. I’ve got friends coming from all over saying, ‘Hey we’re going to go out downtown.’ I’m like, well, I’m coming to race. You better be at the race.”

Fans will also be treated to a plethora of entertainment. Hall of Fame rocker John Oates will serve as a Grand Marshal on Friday, May 31. Country music star Tim Dugger will perform a post-race concert Friday, May 31, and a pre-race concert Saturday, June 1, at 4 p.m. He’ll also be a host of the VIP Party Deck at the speedway during the event.

Big & Rich singer John Rich’s Redneck Riviera, located in downtown Nashville, will have drink specials throughout the week of the event for those with passes to the VIP Party Deck. Tickets to the Part Deck are available by calling 844-DIRT-TIX or by even upgrading tickets at the event.

It’ll be a can’t miss historic event, ingraining the roars of the World of Outlaws into the famous sounds of Nashville.

WHEN & WHERE
Friday, May 31, and Saturday, June 1, at Nashville Fairgrounds Speedway in Nashville, Tenn. for the Music City Outlaw Nationals.
-Grandstand gates are scheduled to open at 4 p.m. with Hot Laps at 6:15 p.m. and Racing at 7 p.m. both nights.

ABOUT THE TRACK
Nashville Fairgrounds Speedway is a 1/4-mile track with dirt layered on top of the asphalt track. There is no current track record for the dirt track.
Online – FairgroundsSpeedwayNashville.com
Phone – (615) 254-1986

1/4-MILE WINNERS THIS YEAR
There has been one race on a 1/4-mile track so far this year. Carson Macedo won at Silver Dollar Speedway on March 15.


AROUND THE TURN: The World of Outlaws NOS Energy Drink Sprint Car Series will next race on Tuesday, June 4, at Fairbury Speedway in Fairbury, Ill.