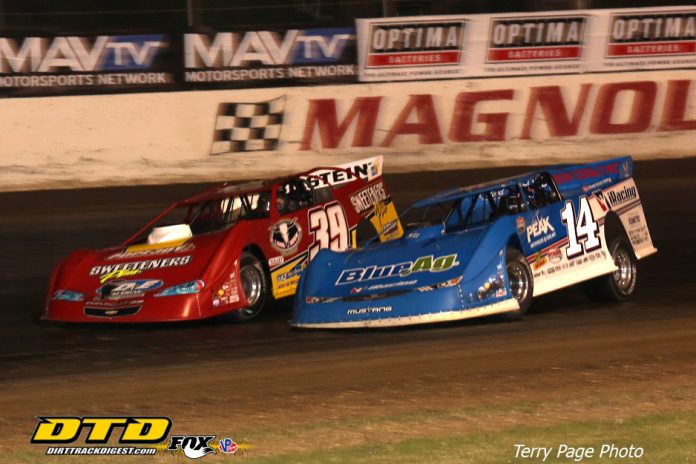 COLUMBUS, MS – Josh Richards picked up his first Lucas Oil Late Model Dirt Series win of the season on Thursday night a Magnolia Motor Speedway. The Clint Bowyer Racing pilot scored the win on night one of the GEICO Clash at the Mag – presented by Big River Steel.
Richards made a clean sweep of the night’s racing activities as he set the Miller Welders Overall Fast Time, then won his heat race to earn the PFC Brakes Pole Award. He later led the final 15 laps of the 25-lap main event to cap off a perfect night.
Tim McCreadie grabbed the lead from his fourth-starting spot on the opening lap. McCreadie led until Richards passed him for the top spot on lap 11. Richards then fought off side-by-side attempts from McCreadie to become the eighth different series winner of 2019.
McCreadie finished in second, followed by Richards’ teammate, Don O’Neal. Defending Clash at the Mag winner, Hudson O’Neal was fourth and Mike Marlar took the fifth spot in his first LOLMDS appearance of the season.
“At the start of the race we spun our tires a little bit,” said the 31-year-old racer who scored his 26th career series victory. “I tried to pace myself through the middle of the track. I didn’t want to get too boxed in behind lapped traffic. He [McCreadie] got close a couple of times. We have had a lot of speed lately, but we just haven’t been able to put it all together. This was just a 25-lapper but it feels good to get the victory. Anytime you run laps, you run hard. The way the format is this year it was important to get off to a good start tonight.”
McCreadie was also looking for his first LOLMDS win of the year but continues his string of strong finishes with his runner-up performance. “I got off to a good start, then had a little bit of a driver error. I should have gotten down on the bottom. This is such a nice racetrack. We will take a second and come back tomorrow night and hopefully get one spot better. We are trying our best to help our Longhorn Chassis drivers. We can’t do a lot of testing like some of these other guys, but I think we can hold our own against them.”
Don O’Neal, who is a two-time Clash at the Mag winner, completed the podium with his third-place run. “Congratulations to Josh and his crew. They needed a win just like we did. I thought where we started tonight, we could get it done, but we had a good points night and we’ll come back together and give it another try.”
The winner’s Clint Bowyer Racing, Rocket Chassis is powered by a Cornett Racing Engine and sponsored by IRacing.com, Peak Antifreeze and Coolant, Ford Performance, DeKalb, BlueAg and Integra.
Completing the top ten were Earl Pearson Jr., Tyler Erb, Stormy Scott, Devin Moran, and Jonathan Davenport.
Lucas Oil Late Model Dirt Series
Race Summary
Thursday, May 30, 2019
GEICO Clash at the Mag – presented by Big River Steel
Magnolia Motor Speedway – Columbus, Miss.