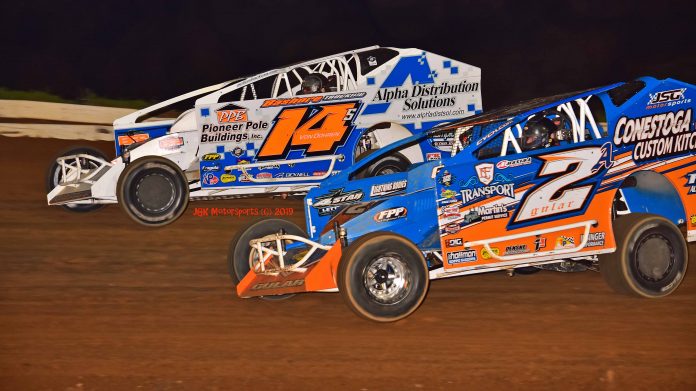 POTTSVILLE, PA – The 7th annual “Money in the Mountains” race at Big Diamond Speedway turned into an instant classic which will be talked about all season. With $10,000 on the line to the winner of the 50-lap race it was sure to bring out the best of the drivers’ capabilities.

When the dust settled, and the checkered flag flew it was Craig Von Dohren standing in victory lane for the second time in two weeks as he held off a determined Mike Gular for the win. Gular gave it all he could to muscle his way past Von Dohren but in the end came up a half of a car length short. Ryan Godown was also part of the mix finishing a very close third.

Gular brought the field down to the green flag and immediately jumped to the lead with Von Dohren close behind after starting third. Billy Pauch Jr was also in the mix early on from the fourth spot.

The first caution of the race came out on lap four when Justin Grim slowed to a stop. The first attempt to restart the race was halted for another yellow and on the subsequent restart, it was Von Dohren outpowering Gular into turn one to take the lead. Once Von Dohren gets the lead at Big Diamond it’s usually lights out for the competition, but the invader Gular had other intentions on this night. After opening a small lead, Gular started to gain on Von Dohren and by lap 15 was all over the leader. Working the low line between turns three and four Gular could pull alongside Von Dohren but CVD would power off the turn to stay in front.

Gular finally managed to wrestle the lead away from Von Dohren as they crossed the line completing lap 20. Gular’s attempt to lengthen his lead was slowed when the yellow came out on lap 21 when both Rick Laubach and Ryan Krachun both slowed.


On the restart, Von Dohren once again out powered Gular getting into turn one to retake back the lead. Multiple yellows ensued as the field approached the lap 30 fuel stop. Lap 29 saw rookie driver Alex Yankowski hit the front stretch wall hard bringing out the yellow and this is where the fuel stop was taken.

After the 10-minute break, it was back to racing with Von Dohren leading the way with Gular stalking him each and every lap. Ryan Godown was starting to make his presence felt now as he was applying the pressure to Gular for second.

The final yellow of the race came out on lap 35 when Ryan Watt slowed with a flat tire. The final fifteen laps of the race were scintillating as Von Dohren, Gular & Godown ran nose to tail every lap. Gular now had to fend off Godown for second while also trying to find a way around Von Dohren for the lead and it almost cost him as Gular went high to make a move around Von Dohren only to have Godown make a move underneath to steal away second but Gular was able to cross back over and motor past Godown to remain in the runner-up spot.

With five laps to go it was apparent that Gular had the faster car between himself and Von Dohren but the question remained if he could get by him. Gular worked hard each and every lap and with two to go was under Von Dohren to pull even with him only to have Von Dohren edge back in front as they took the white flag. Gular repeated what he had done a lap earlier on the last lap as he muscled his way under the leader coming through turns three and four and gave it all he had but Von Dohren wasn’t giving in and held tough as they came off of turn four side by side. With the large crowd on their feet cheering on the two combatants it was Von Dohren edging out Gular by a half a car length to take the crowd pleasing win along with the big money.

“I knew he (Gular) was there but I wasn’t sure how close he was,” as a happy Von Dohren talked afterwards. “I could see the flashes from the photographers, so I knew it was close. There was a fine line in turns three and four and a couple of times I missed it and he was able to get under, but we had enough to hold him off, I guess. Dick Biever gives us good cars and I am glad I was able to get him a win tonight.”

A disappointed Gular finished second. “This car was really good tonight. I did everything I could to get by him except race him dirty but that is not how I race. It’s disappointing to finish second but we’ll take and come back on Tuesday. The new track surface and the new lighting are great and I look forward making a return trip.”

In the 20-lap USS Achey Sportsman feature, it was the veteran Doug Hendricks making it two in a row as he dominated the action after taking the lead very early on from his sixth starting spot from Ryan Kunkle. The race was slowed by just one caution flag on lap 16 giving the field a chance at Hendricks but it was to no avail as Hendricks stayed in control for the remaining four laps as his competitors battle hard behind him for the top five. At the end it was Hendricks winning the race followed by Craig Whitmoyer Wayne Witmer, Ryan Kunkle and Tim Fitzpatrick.

The Eash’s Towing and Recovery Street Stocks put on show as Jason Geesaman and Jeff Haag both coming from the back after early race incidents dazzled the fans with Geesaman winning out the side by side battle for the win. Haag was the early leader and looked to be in control until the caution came out on lap 10. Haag was then forced to pit to when a piece of his car had come loose. After making repairs Haag restarted at the back of the field and with only 10 laps remaining made a hard charge to the front to battle Geesaman who had took the lead on lap 14 after he spun earlier in the race. The two drivers raced hard for the last two laps of the race with Geesaman just edging out Haag for the win. Elvin Brennan III, Eric Tripp and Jim Somers were the top five.

Chris Holland was the winner of the Savage 61 Road Runner main event after taking the lead on lap six. Holland, Jim Kost, Terry Kramer, Matt Ney and Kris Ney waged a tremendous battle for the lead early on before Holland took control. Once in front there was no catching Holland as he went on to take the win over Matt Ney, Terry Kramer, Jim Kost and Kris Ney.

The Pizza Shop of Etters Central PA Legends put on quite a show for the fans as they went non-stop in their main event. Aaron Updegraff was the early leader with Scott Houdeshell taking command as the field was coming to the halfway flags. Jeremy Ott was on the move and pressuring Houdeshell for the lead as the laps wound down. Making a last-ditch effort on the last lap, Ott was able to pull alongside of Houdeshell as the duo raced for the win with Houdeshell hanging on to win by just a few feet. After the top two it was Mason Chaney, Travis Perry and Alex Schmiedel the top five finishers.

Don’t forgot on tap for this coming Tuesday June 4th, it will be the Short Track Super Series in action with the “Anthracite Assault” as the cars and stars from the North Series battle those from the South Series in the only combination race of the STSS. Last year there were over 50 modifieds in attendance for this event before the rains came to cancel the program. Along with the STSS modifieds will be the Crate 602 Sportsman North vs South battle.

Did Not Start – Mike Burrows and Dakota Kohler.

Did Not Start – John Snesavage.