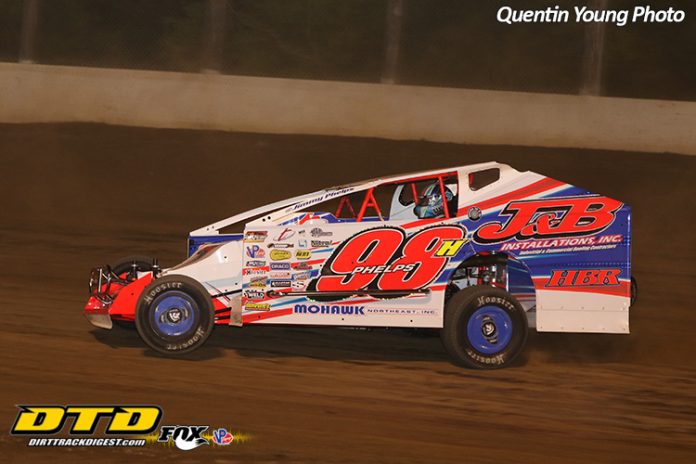 BREWERTON, NY – Last week, Jimmy Phelps was out of the race on lap three with mechanical issues. A perfect rebound saw Phelps lead all 35 laps with little pressure, grabbing his first win of the season.

Jimmy Phelps launched out front at the start of the Modified feature, wasting no time building up a big lead, distancing himself by a full straightaway over Matt Hulsizer by lap 7. Meanwhile, Billy Decker and Larry Wight were making major headway from their starting spots in the mid-teens, with Decker cracking the top five on lap 10 with Wight in tow.

By lap 13, Decker had secured third and was working on Hulsizer for second. Decker grabbed the spot, with Wight following, at the halfway mark. As Decker, Wight, and Hulsizer fought over the runner up spot, Phelps grew his lead to half a lap. However, the yellow flew on lap 21 for Tim Harris’ broken front end, and Phelps’ lead evaporated.

A couple quick cautions left Ronnie Davis’ car with no rear end left in it, and the field went green for good on lap 24. Phelps went to the top and Decker went digging down low, and Decker almost grabbed the lead. Eventually, Phelps got his momentum rolling and cleared for the spot, and Decker then joined Phelps on the cushion. Over the final laps, Decker hung around three to five carlengths behind Phelps, but couldn’t get close enough to make a bid at the win in the closing stages. After 35 laps, it was Jimmy Phelps claiming victory over Billy Decker, Larry Wight, Tim Sears Jr., and Matt Hulsizer.


“Last week was kind of a bummer, but it gave us a good starting spot for tonight,” Phelps said. “When you start up front you don’t exactly know what you got but I knew we were good. We haven’t done a whole lot of racing with the weather, and what we have done we haven’t had the best of luck but our car has been pretty good.”

Jeff May topped a strong field of 39 Can-Am Mod Lite Series entries, grabbing the win in a caution-filled event. Jim Spano notched his first Sportsman victory in quite some time in the first feature, while Alan Fink made a late charge to get the win in the second Sportsman event. Chuck Powelczyk battled through mechanical issues on the front end of his VW Rabbit to score the 4-Cylinder win.