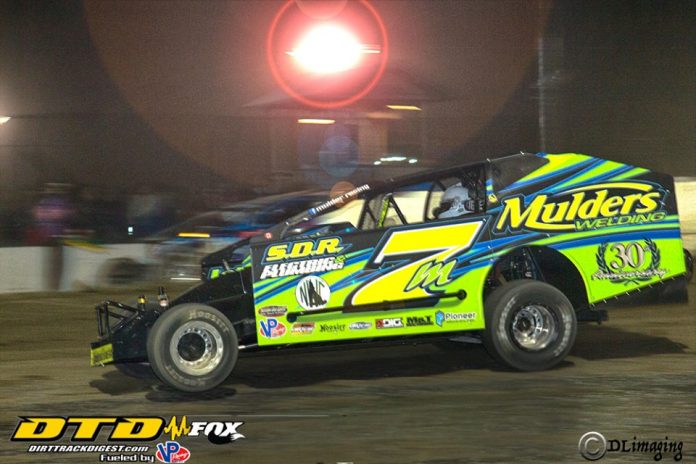 HOGANSBURG, NY – G&R Auto Parts was on hand for the second race of the 2019 season at the Mohawk International Raceway. A great crowd was treated to some action- packed racing in all 4 regular divisions plus the first appearance of the season for the Eastern Ontario Vintage Sports Car Club.

The Twin Leaf Stores 358 Modifieds took the green for 30 laps with Madison Mulder taking the lead over Brian McDonald, Carey Terrance, Chris Raabe and Tim Fuller. Mulder would lead the opening 4 laps before McDonald would take control of the race on lap 7 and begin to open up a comfortable lead while behind him Mulder was having his own battle with Chris Raabe for 2nd and 3rd. Both drivers swapped lanes through the mid portion of the event with Mulder staying in control of the number two position. At the halfway point McDonald stayed in control of the field but Mulder was starting to close the gap while behind them things were tightening up between Raabe, Terrance and Fuller as the battled for a top 5 position. With 10 to go Mulder had McDonald in his sights and was looking for a way by as Raabe, Terrance and Fuller closed to make a great 5 car battle for the lead. On lap 23 Mulder saw the opportunity and slid by McDonald in turn 3 with an impressive slide-job and began to open up the advantage. With Mulder out front, last weeks winner Chris Raabe was able to get by for 2nd and try at will to close in on Mulder for the lead. On the final lap heading into turn 3 Mulder pushed wide allowing Raabe to charge the bottom and edge out front. But Mulder had top lane momentum and was able to fend off the former track champion, to score his 2nd career 358 Modified win and first since his rookie season in 2017. Chris Raabe finished a hard fought 2nd with Brian McDonald, Carey Terrance and Tim Fuller completing the top 5.

In Crossroads Tobacco Sportsman action Shane Pecore returned in the Gauvreau Racing ride for the evening, drew the pole at intermission and drove out to a big lead at the start of the 25-lap event with Brianna Ladouceur, Jason Rose, Brent Kelsey and Cedric Gauvreau. Pecore, much like last week, had a dominant car and stretched out to a 10-car length lead with Ladouceur and Rose filling out the top 3 as they began to work traffic. Pecore was making some great moves through the lapped cars and tried to put as many between himself and Ladouceur as he could, as the field worked lap 10. On this lap Melvin Rush slowed on the back stretch, but Chris Frennier would be the driver to bring out the red flag as he clipped an infield tire in turn 2 sending his car into a series of flips. Frennier would be ok and would take the mandatory ride in the ambulance. On the restart Pecore took the top spot but Ladouceur would show her muscle and draw even as the field worked the back stretch. Pecore would get the advantage back in turn 4 and start to open up that lead again over Ladouceur with Jason Rose, Brent Kelsey and Cedric Gauvreau the top 5. But the night was about to change. On lap 13 Brent Kelsey made hard contact with the back-stretch wall sending him upside down in the middle of the speedway. Several cars were collected including Junior Delormier, who slammed into the front end of the Kelsey machine. Delbert Legrow and Greg Snyder were also collected bringing out the 2nd red flag of the night. Kelsey climbed out unhurt while Snyder and Legrow pulled away. Junior Delormier was taken in the ambulance for further evaluation. When the green flew it was Pecore once again in command as he drew away from the field with Ladouceur, Gauvreau, Zack Arquiett and Thomas Cook. Without a caution flag over the final laps Shane Pecore put it on auto pilot and ran on to his 2nd straight Crossroads Tobacco Sportsman win at MIR over Brianna Ladouceur, teammate Cedric Gauvreau, Zack Arquiett and Thomas Cook.

In Novice Sportsman a pair of yellow flags flew, first on lap 1 for Dale Gonyo who collected the turn 4 wall and bent an axle. On lap 2 Cory Castell faced problems with a broken front end on his machine. Once yellow fever subsided it was Joshua Pete in control of the field with Gavin Riddell, Dan Reif and Nolan Swamp completing the top 5. Riddell had a fast car and would make his move to the top spot on lap 7 and bring Dan Reif to the number two spot. Over the final laps Reif and Riddell would stage a great battle for the lead but Nolan Swamp was also charging forward and looking to spoil their party. On lap 13 last weeks winner Kurt Russell would spin in turn 4. On the final restart Riddell charged to the lead but Nolan Swap laid it all on the line as he charged to the top in turn 1 taking 2nd from Reif and began to reel in the leader. On the white flag lap Swamp was on the back bumper of Riddell as they charged into turn 3. Riddell took a different line in the corner leaving the outside lane open for Swamp. As they charged off turn 4 Riddell was able to stay in front and claim his 2nd ever Novice Sportsman win at Mohawk and 1st of the season. Swamp would finish a very close 2nd over Dan Reif, Dan Beachard and last year’s Bandit champion RJ Tressider, who came from 13th to finish up 5th.

One of the best Bandit 10 lap features took place on this night and it was a great show put on by Matt Zira and Francis White. Both drivers began the event on the outside of the first two rows but had the top two spots by the end of lap one and began to run away from the field during their side by side battle. On lap 4 the only caution would fly as Terry Lamica and Preston Snyder would come together in turn 4. On the restart it was once again the Francis White Matt Zira show as they held the top spots with Jeff Putnam, Jeff Trap and Terry Lamica close by in the top 5. After a great side by side battle Whit would edge out front on the white flag lap but Zira was not done. Zira would close in and drive the car deep into turn 3 to pull even with White. The top two would race to the checkered flag and by a car length, Francis White would claim the win on this night. Matt Zira finished a ver close 2nd with Jeff Putnam taking his 2nd top 5 finish in a row with a 3rd place effort, Jeff Trapp and Terry Green Jr. came to the line to round out the top 5. An emotional Franics White would dedicate the win to his father, who happened to be celebrating his birthday.

The Eastern Ontario Vintage Sports Car Club made their first appearance of the season for a 20-lap event. Merrickville Ontario’s Steve Billings would have his way with the field. Through the majority of the event it was Steve in front, father Brian Billings in 2nd and Denzil Billings Jr. making up the top 3 but Sheldon Hoogwerf was on the charge and tried at will to spoil the family dominance at the front. Hoogwerf would make his way to 2nd and looked to have a faster car than the leader. While running 3rd with 7 to go, Hoogwerf would slow in turn 3 and head pit side ending his great run. Without a caution during the race Steve Billings would make it look easy scoring a dominant win with Brian Billings and Denzil Billings completing the top 3. Tim Charland would also be victorious taking the win in the 50s and 60s division.

In Sportsman heat action Jamy Begor was taken for evaluation after being hit in the leg by his drive shaft during a qualifying heat event. Junior Delormier was also reported to have suffered injuries to his arm and ribs in a lap 10 crash in the Sportsman feature. No further update on their conditions have been provided.

Next week the Twin Leaf Stores 358 Modifieds have the night off which opens the door for the Lucas Oil Empire Super Sprints and the Quebec Lightning Sprints to take center stage. Crossroads Tobacco Sportsman will be on hand along with the Novice Sportsman Bandits and Mod Lites will make their return. Canadian money will once again be taken at par at the main gate only during the 2019 season. Be sure to save your toll receipt and present it at the general admission gate for a free bridge pass for that evening.