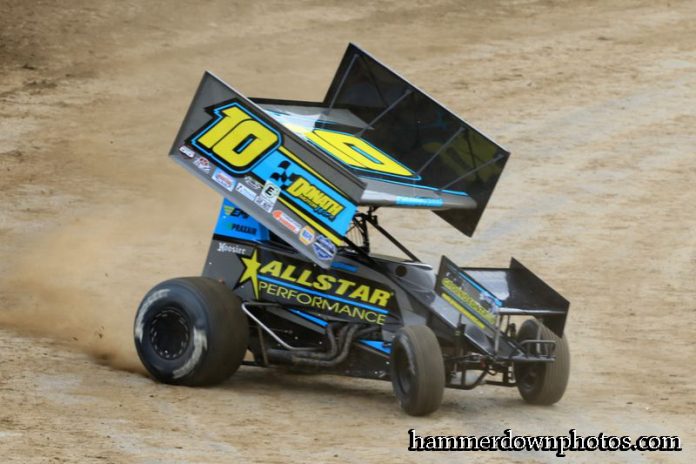 DRUMMONVILLE, PQ – Teenage sensation Paulie Colagiovanni has shown speed over the past few years, he has even graced victory lane in Quebec for his first career Lucas Oil Empire Super Sprints win. For 2019 consistency and a new focus has been showing results and top five finishes. Saturday night at Autodrome Drummond the progress peaked as he took the $2,085 victory in front of a huge crowd.

Taking the lead on lap seven and surviving a late race restart, his familiar #10 won the Mach 1 Chassis A-Main that also paid points for the Ohsweken Speedway Canada Tour and the Fondations 4 Saisons Quebec Series. The trip up north now sees Colagiovanni solidly in third in the overall point standings behind past ESS champions Jason Barney and Chuck Hebing.

“This win feels good. We have been more consistent this year and Doug Emery has been a big part of that,” he said happily shortly after his win, “The car is set up each race and it’s getting me more confident and more comfortable behind the wheel.”

Going fast has never been an issue with the young chauffeur, but as he said, it’s been the consistency. The win marks is fifth top five finish of the young season. While he knows there is a lot of racing left, just being mentioned in the same breath in the names mentioned earlier is humbling. “To be running with those guys and now finishing with them is something that is pretty cool,” Colagiovanni noted. “I know it’s a long season but to have the finishes we have been having gives you confidence.”


New Jersey star Davie Franek drew the pole and lead the first six laps, with the leading duo in heavy traffic early it enabled Colagiovanni to slip by. Even though the scorecard shows Colagiovanni bringing home the checkered leading every lap from there. Franek actually swapped the lead a few times before actual laps were scored at the line while there were also weaving in through the slower cars.

In the late stages, Jordan Poirier got by Franek which produced and exciting result in front of the hometown crowd. “I am very happy to get second here at Drummond. To stand on the podium here in front of fans and friends is special,” noted Poirier, “The car was good and I could run high or low. I got fortunate there to get second at the end and it made for a good night.”

Franek set fast time in his group, won his heat and drew the pole. “We had a real good car right off the trailer but just didn’t get the right break there at the end,” noted the driver who drove seven hours overnight to make his first ever visit to Drummond, “This place and the crowd is just amazing, I heard the stories about Quebec and it’s awesome. You will definitely see me back here.”

Steve Poirier backed up his runner-up finish the night before at Granby with a fourth followed by Barney. Rounding out the top ten were Hebing, first year sprint car pilot Bryan Cloutier who was a teammate to Alex Vigneault on this night, Granby winner Billy VanInwegen, Matt Tanner and Vigneault.

A total of 28 cars filled the pit area for the second night in row up in Quebec.