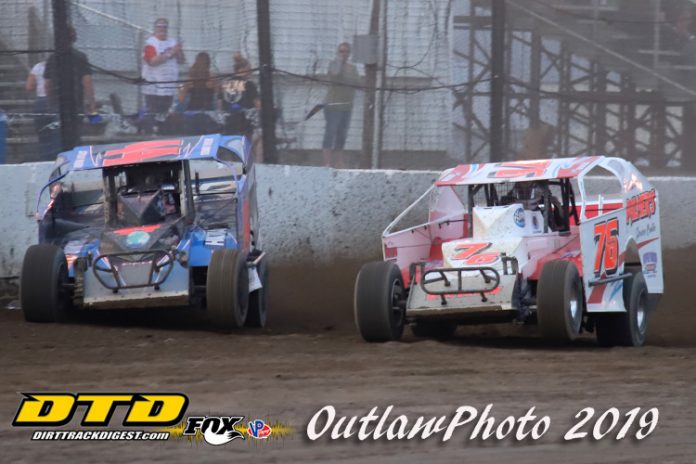 By MATT NOLES
FONDA, NY- June 1, 2019- Redemption often comes to those who wait. That is, of course, unless your last name happens to be Varin or Friesen.

With both drivers coming close to breaking the ice and returning to Fonda’s coveted victory lane only to come up just short thus far in 2019, it was only a matter of time until that proverbial and often spoke of ‘something’ had to give. What wasn’t expected was for it to occur for both drivers on the same evening.

Though the great sport of baseball seemingly has the market cornered where day-night doubleheaders are concerned, Fonda Speedway fans were treated to exactly that with two 30-lap modified features on the order of events Saturday night. To say they weren’t disappointed is an understatement as both events left the end result undecided until only a handful of laps – or yards – remained.

Korey Wilder and Scott Hubert brought the first feature event of the evening to the green and after an early race caution after one circuit was completed, Korey Wilder stretched out his advantage in the early stages.

Though Wilder built up a comfortable lead over the first eight-laps, all eyes were on Danny Varin as the driver of the famed No. 93 Magsarus entry quickly moved into the second position and set his sights on the No. 121 of wilder.


After another caution bunched the field up again on lap 11, Danny Varin made quick work of Wilder and set sail with the elder Varin climbing into the runner-up spot by lap 14. Danny Varin’s stellar run came to an end on lap 16 due to mechanical problems handing the lead over to seven-time track champion Bobby Varin.

Had the feature run its course without any further interruptions for the remainder of the event, Varin more than likely could have run away and hid from the rest of the field.

However, given how his season has gone thus far where luck is concerned, that wasn’t the case as a lap 20 caution put the field on his rear bumper for a ten-lap dash to the finish.
Varin was able to build up a sizeable advantage on the restart but by lap 23, Stewart Friesen had moved into second and quickly began chasing down the famed Palmer’s Service No. 76.

With only two circuits remaining, Friesen had closed within five car-lengths of the leader and on the final lap, Friesen made a strong move to the outside of Varin in turn three thus setting up a venerable drag race to the finish off of turn four which saw the latter come out on top by a mere 0.110 seconds at the line. Brian Gleason, Jessica Friesen and Mike Maresca rounded out the top-five.

With a career that has spanned over 30-years, Bobby Varin knows as well as anyone that no single victory is easy. His first triumph of 2019 can easily be placed into the difficult category.

“That was a tough one,” Varin said after his victory Saturday night. “I sealed up my tires at the end there and I started going away and I knew I was slowing up. It happened a couple of weeks ago when I lost the race to Rocky. We didn’t need the caution late in the race tonight but that’s a part of racing.”

With speed starting to slacken and grip becoming a relic of a bygone era over the closing laps, Varin knew a challenge was coming. He just thought it was going to happen far earlier than it did.

“I was expecting someone to come along earlier,” stated Varin. “And then when it didn’t happen, I thought maybe I was good. I didn’t see him [Friesen] until we came off of turn four and I realized I had to put my foot into and get the job done and we were able to do that tonight.”

Battling one’s fellow competitors is a known variable in racing. However, the speedway surface certainly threw everyone for a loop making the task of getting to victory lane that much more difficult.

“The track was challenging all night,” Varin said. “It rutted up pretty good and it was fast on top of that so when you have a combination like that, it could make for a tough situation with tires coming off the ground and motors revving up, but at least they’re trying to do something at the speedway to improve it so you have to give the track crew credit for putting forth an effort.”

After coming up just shy putting his name in the win column a few weeks prior, one could say that this was redemption for the Sharon Springs, N.Y. native. Varin prefers to choose a different outlook entirely.

“We have two really fast race cars down here,” Varin concluded. “They’re just not the fastest car every week but we’ve been consistent and that’s what we want, that’s the key. It feels good to get a win but it feels even better to get one for the team. Alton and Carole [Palmer] and all the guys that work on this thing every week deserve to get a win. I’m just happy I was able to get it for them tonight.”

In the second 30-lap feature event of the evening, Ryan Odaz and Vinny Sanganetti led the field to Joe Kriss’ green flag with Odaz shooting into the lead and building up a rather sizeable advantage as the field completed the first lap of the main event.

With Odaz streaking away from the remainder of the top-five, Craig Hanson quickly moved from his fifth starting position to second in the running order and began to chase Odaz’s No. 88 down in short order.

A quick caution put Hanson alongside Odaz and on the restart, Hanson moved his familiar No. 20C into the lead by the completion of lap 10.

Another caution re-racked the field and on the ensuing restart, Hanson again stretched his advantage with Rock Warner and the Jake Spraker owned No. 1J moving into second.

Warner’s position in the runner-up spot was short lived – momentarily at least – as four-time track champion Stewart Friesen rolled by and set his sights on Hanson.

Though it didn’t take long for Friesen to catch the race-leader, it did take him much longer than one would expect for him to launch his Halmar sponsored No. 44 into the top spot. With Friesen looking low for four consecutive laps, Hanson was able to fend off his challenges until another caution for Scott Hubert slowed the field setting up a 100 mile per hour game of chicken heading into turn one.

On the restart, Friesen pulled alongside Hanson heading into the first corner and by the time the duo reached the banks of the mighty Mohawk River, Friesen took over the top spot and would not be denied as he led Rocky Warner to the finish with David Schilling, Craig Hanson and Bobby Varin rounding out the top-five.

For Friesen, who could literally write a book on how to lose a race given all of his bad luck as of late, his first victory at the storied fairgrounds oval was as difficult to reach as it was entertaining to watch.

“It was tough,” Friesen said post-race. “I was trying to run the bottom and it was a little bit bumpy down there. I’d run one lap well and then the next lap I’d get out of shape. We got up to third or fourth there and then we had that one restart where we got jammed up in turn one and lost a bunch of spots.”

For Friesen, it seemed like deja vu all over again. “We just haven’t been able to catch a break over the last couple of weeks,” continued Friesen. “But we finally got rolling and I started picking the guys off.”

Whenever Friesen gets into the top-five, it’s generally only a matter of time before he finds himself in the lead with little to no resistance. During the second modified feature, that wasn’t the case as Craig Hanson put up one hell of a fight in the latter stages of the event.

“I had to work on Craig pretty good,” Friesen remarked. “He was good. He was fast last week before it rained and he was fast tonight. I couldn’t really square up to get him. I could get into the corner good and have good side bite but we kept the car pretty free to run the top and as slick as it was on the bottom off of two, we were just hanging a little bit.”

“We’ve been good all year,” he continued. “The DKM chassis has been fantastic and Halmar has been super supportive as well as all of my guys but it’s just been such a battle here the last couple of months. We’ve had good runs, seconds, thirds and so on, and it’s been crazy. To finally get a win is awesome.”

Though Friesen wouldn’t be considered a hometown, homegrown driver, he’s certainly willed himself into not only the history books of the Fonda Speedway, but into the good graces of the Fonda faithful as well. In short, he loves running at the fairgrounds oval and is more than pleased to see the positive changes that have come with the managerial team spearheaded by Brett Deyo.

“I love seeing the grandstands full again,” concluded Friesen. “Even with the threat of rain and all of the living room meteorologists out there, which tend to hurt crowds more than help, people were still in the stands tonight. It’s good, really good to see. I love racing here and I love being a part of this place. Getting a win here just makes it that much better. Now that we finally got the monkey off our back, I hope we have more wins coming.”