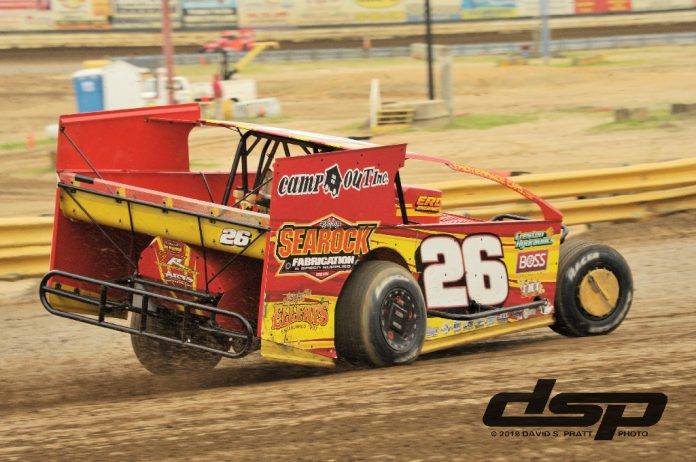 NEW EGYPT, NJ – Four-time Modified champ Ryan Godown of Ringoes, NJ captured his third Vahlco Wheels Modified feature event of the season Saturday night at New Egypt Speedway in the annual tribute to the Military 40 lap event. Godown took the lead from Blaine Bracelin on lap 12 and powered away over the remaining 28 laps to record his 49th career NES victory.

“Tonight is about the folks in the Military, we just try to put a show on for the fans”, stated Godown in victory lane, “With an excellent track as fast as it was tonight, it is difficult to come thru the field as everyone is fast.”

Blaine Bracelin & John Pakenham brought the 25-car field to the start with Bracelin taking command after a short battle. JR Fulper was moving up quickly and made his presence known as 8th starting Godown and Ryan Krachun battled hard as they advanced thru the field. Godown was on a mission and he wrestled the lead away on lap 12 as Mike Butler surged into the top five. One lap later Bracelin’s great run ended as he retired from the event. Godown pulled away as an excellent battle for second began between Krachun, Butler, Fulper, & PJ Oliver. Krachun’s hopes to catch Godown ended as his motor expired and the restart saw Oliver take up the chase. Danny Bouc and Billy Pauch Jr. now appeared in the top five and joined into the torrid battle for second as Godown powered away again. The final caution appeared when Pauch Jr. developed a flat tire with 4 laps remaining, however no one had anything for the powerful Godown who cruised to the victory. PJ Oliver broke thru for his best finish of the season taking home a popular second. Mike Butler continued his solid season with another excellent performance finishing third, Danny Bouc rebounded from an early race pit stop to finish 4th and JR Fulper posted a top five by finishing fifth.

The Larry’s Hot Rods and Harley’s Northeast Wingless Sprint Cars 20 lap event was captured by first time winner Larry Drake. Drake held off a persistent Jermain Godshall over most of the race for his first career win. Stan Ploski continues to show his legendary form since coming out of retirement as he crossed the line third.Point leader Rich Mellor and Duane Nixon rounded out the top five.

Johnny Bangs picked up his second career victory in the Crate Modified 20 lap feature event. Bangs battled with race long leader Bobby Holzwarth and a hard charging Joe Toth with these drivers going three wide for the lead several times on the final two circuits. Bangs was able to get under second year racer Holzwarth on the final turn for the win. Holzwarth crossed the line second posting his career best finish despite being denied his first ever victory. Toth settled for third after he ran the leaders down with three laps remaining, 2018 rookie champ Ryan Heim & 3-time Crate Modified champion Eric Palmer completed the top five at the finish.

The Mike’s Performance 4-Cylinders saw TJ Graves win for the second time this season. Graves took the lead from Dom Antonelli after the halfway mark of the 15 lap event and won for the first time since opening night. Point leader Mike Fox made a late race charge into second while Antonelli held on for third. Justin Dunn and Jim Avery finished fourth and fifth.

Next week Sat. night June 8th it is Rat Rod night at New Egypt Speedway. All Rat Rod owners will receive ½ price general admission and there will be an on track Rat Rod parade at intermission. The Vahlco Wheels Modifieds will once again headline the event, and they will be joined on the track by the Hammer Sportsman, Mike’s Performance 4-cylinders, Street Stocks and the Lyons Construction/MetalFab Rookie Sportsman.Admission will be $20 for Adults (16+), Teens (12-15) & Military w/ID are $10, with Kids 11 & Under being FREE, pit gates will open at 4pm,grandstands at 5pm with warm-ups at 6pm and the first race taking place at 7pm.

Salute to Our Veterans