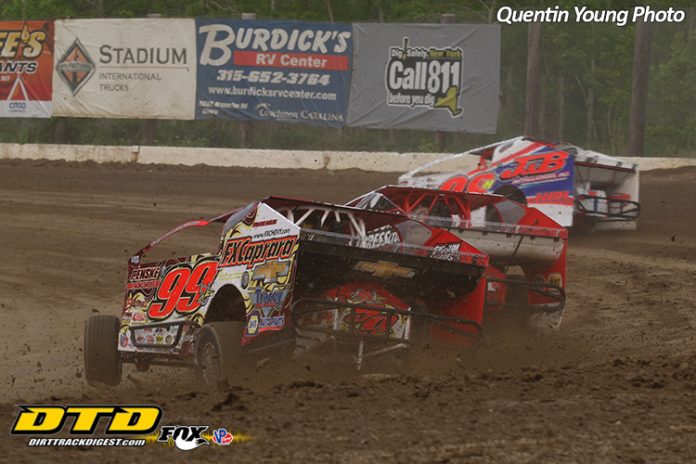 Jimmy Phelps had a very disappointing opening night at the Brewerton Speedway when the right rear axle broke on his Heinke-Baldwin Racing Teo. That resulted in him only being able to complete three laps of the scheduled main-event.

Friday night, as a result poor results, Phelps started on the outside of the front for the feature. It was an opportunity that he knew he had to make the most of, which he did with his first feature win of the 2019 season.

“Last week was disappointing because I thought we had a decent car,” cited Phelps after the triumph in the 35-lap affair. “We had to make something of this week. We only went three laps last week so we really didn’t know what we had for a car. The car was really good tonight.”

Prior to the first caution of the main, Phelps’ had the dominant car leading the race by over a straightaway. He was passing and lapping cars at will as he extended his advantage over the rest of the competition. That changed after the midway point when the caution came out for the first time putting Billy Decker and Larry Wight on his rear bumper.


“Its nerve wracking because you don’t know what you got and then you see Larry and Billy there in second and third,” commented Phelps. “You don’t know where to restart. I think I made the right calls. The top was definitely dominant. We were there first. We’ll see next week if we can run with those guys. I’m hoping we can.”

The top was the dominant lane on the speedway, but rather than blast the cushion all the way around the track, Phelps ran a unique line through turns one and two electing to enter through the middle before catching the cushion midway through the corner. He’d then drive off on the top. In turns three and four he kept the car right on the berm.

“My whole thing was, especially on restarts, I’d try to run through the middle to keep someone from getting an angle to slide job me,” stated Phelps. “I didn’t really know if I was any better going all the way out or if going through the middle to the top was better. I really couldn’t tell. Once I started to get to the point that I didn’t see them anymore I decided to just stay there. The guys told me I should have rolled in on the top, but that top hasn’t been here like that the last few years. I guess we are going to have to readjust our approach to turn one.”

Although he started in front of them, Phelps was able to beat both Decker and Wight to checkered giving him confidence that he’ll have a car to compete with them once he finds himself starting back where he normally does near the rear of the field.

“I felt like we had a really good car even though we had good track position,” commented Phelps. “We got to race with the best cars here. I’m not saying we were much better than them, but we weren’t holding them up. That is a good start.”

Billy Decker Goes All Out

“The top was just better,” said Decker. “I couldn’t hit the bottom any better than I did on that restart. He was getting away from me so I figured I had to move up from that line. I was trying to do things a little different, maybe cut back across to take a peak. We had a good race car, but he was just as good. It was a solid night. We’ll take it.”

Wrong Lane for Larry on Restarts

Wight ended the night in third in his LJL Racing ride. Wight found himself on the inside lane on a few different mid-race restarts which allowed teammate Decker to get by. He tried battling back, but like Decker, he couldn’t find anything on the bottom of the speedway. He gave it a go on multiple occasions.

“There wasn’t much bite on the bottom coming off of four,” mentioned Wight. “The moisture stayed from the middle up. It seemed to me that you could get away with one lap of charging into one hard and sliding across. Then after that the bottom was alright in one and two, but you had to be on the top in three and four.”

Wight also indicated the team is struggling with a couple of small gremlins.

“We have a little bit of a carburetor issue right now,” cited Wight. “We get in the middle of the corner and it falls flat on its face. It seems to be every time it does that it the car gets tight and shoves the nose. Then we have to play catch-up for a couple laps. I think once we get that figured out we definitely got a good car.”

Hulsizer Hangs on for Top Five

Matt Hulsizer was in the mix for much of the race with Decker and Wight only to find himself fade at the end to finish in fifth. There was a point where he was able to get around Wight on a restart to run with Decker only to have the caution come out a lap later. Wight went back by at the green.

“If we would have stayed green the rest of the way I think we could have been third,” commented Hulsizer. “The caution came out and I was hoping it was one lap so we would go single-file, but that didn’t happen. I was just too tight to run the bottom. We were pretty good once I got rolling and got my brakes adjusted and everything.”

Hulsizer believed he sealed over a tire late which is why he ultimately fell to fifth.

There were 23 cars pit-side which included three small-blocks…

Heat races were won by Wight, Dave Marcuccilli and Hulsizer…

Opening night winner Ronnie Davis III had a tough go of it. Davis spun midway through the race before hard contact with the outside wall ended his night a few laps later. The entire right side of his car was destroyed…