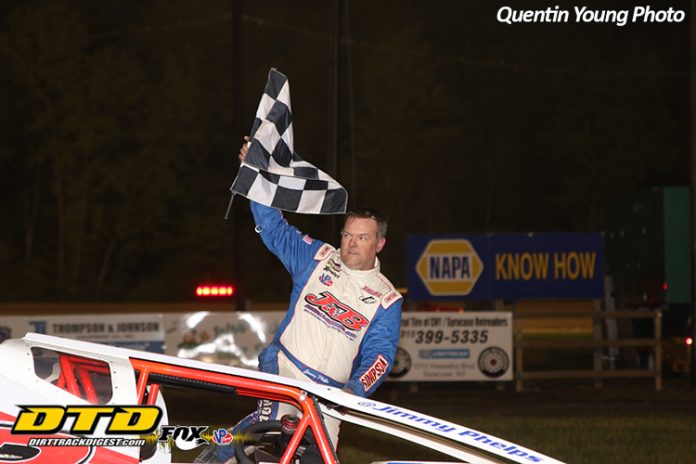 What should have been a three night weekend of races was rain shortened by rain to 1 1/2 nights of racing. Brewerton Speedway had the most favorable weather in central New York putting on a full show of Modifieds, Sportsman, Four Cylinders, and the Can-Am Mod Light Tour. With many inexperienced racers joining the Mod Lite tour the 20-lap feature turned into a caution riddled marathon. No worries. Everyone has to start somewhere and learn the ropes of racing. Jeff May, a Merrittville Speedway regular out ran the local drivers to claim the victory of this new tour’s main event.

Next up the mighty Modifieds put on a show. Jimmy Phelps took the lead on the start from outside the front row to win, but not without being challenged several times by Billy Decker. Decker drove from 14th to finish second, with team mate Larry Wight finishing third.

The Sportsman ran two features with 18 cars each. Torrey Stoughtenger appears to have found some speed this year. He led a majority of the first Sportsman feature but his car seemed to fade as others got quicker near the end of the race. He finished a career best in seventh at the checkers. Jim Spano, a 45 year veteran driver was able to work his way to the top spot for his first Brewerton Speedway win in a few decades. Amy Holland finished a solid second over Willy Decker Jr. in the star studded field.

The second Sportsman feature was another heart breaker for another young talent. Dylan Zacharias was running his back up car after destroying his primary ride at Weedsport on Monday. He managed to lead the feature for several laps eventually finishing 4th. Alan Fink made his way from deep in the field to out race Billy Clark for the win, with Clark in second and Mark Yorker third.


The Four-Cylinder class was dominated by, you guessed it, Chuck Powelczyk. In all, the night went by pretty fast considering the number of cars supporting each class. As always, the fans got a show as each class raced hard, fast, and furious on the tight tacky arena.

Saturday I was burned out all day as an early rise for meetings kept me busy until 2 in the afternoon with no real time to rest. Fulton Speedway got just over half way when another violent storm washed out the night, giving me a sense of deja vu from last weekend.

They did run two make-up features to make up for last weekend’s rain shortened event, and two young guns showed they wanted to race. In Sportsman action in the make up feature Zach Sobotka and Willy Decker Jr. began a battle of the wills in the closings laps, slide jobbing each other at opposite ends of the track for the lead for four laps until Decker was able to find the sweet spot off turn two to gain a slight advantage that Sobotka couldn’t make up. Decker won the crowd pleaser with Sobotka second, and Brandon Carvey was third.

Seven laps into the Can-Am Mod Lite feature event the storm hit ending our night early, again. It rained so hard that race director Timmy Farrell said “I don’t think I’ve ever seen it rain this hard ever in my life”.

Sunday as I was climbing into my car under dark skies and misty rain to leave for Utica-Rome I was alerted that the weather turned sour on them and they had to call yet another show. We have to keep praying for these tracks, and the weather that continually hinders their operation. It’s June and Utica-Rome hasn’t run two shows yet due to constant rain or overly saturated grounds.

Next weekend Utica-Rome is running an AMA sanctioned motocross event so I’m headed to Weedsport for the All Stars Circuit of Champions Sprint Car show. I’ll be at my regular stomping grounds at Brewerton on Friday and Fulton on Saturday as well. As I said before, keep all of these tracks in your prayers for clear skies and full stands.

Watching the 602 Crate Sportsman division grow over the last 3 year’s has convinced me that this one division is the “bread and butter” of every track that runs them. Everywhere I go they outnumber the Modifieds by 10 to 40 cars. That’s a ton of incoming revenue at the pit gate. I hope promoters realize, as they do at the tracks I frequent weekly, that running multiple features and paying everyone works, builds car counts, and gives everyone seat time to develop skills for advancement in the sport.

Looking back on the weekend I saw seasoned veterans and young guns both winning in their respective classes. The age diversity of drivers is widening, while the talent pool is deepening. Cross generational teams and competitors helping each other grow in their abilities to be competitive is one of the things that makes the sport great. It’s also the way Jesus intended His Kingdom to function.

King David had a revelation of Jesus Christ at a time he was crying out to the Lord for help from his enemies. In Psalm 22:14-18 David described seeing what Jesus Christ was going to endure in a prophetic Messianic verse to this Psalm. He went on to declare that he would never stop giving Him glory by sharing all he knew and experienced in His presence. David then saw another time where generations around the globe would worship Jesus Christ together.

“All the ends of the world Shall remember and turn to the Lord , And all the families of the nations Shall worship before You. For the kingdom is the Lord ’s, And He rules over the nations. A posterity shall serve Him. It will be recounted of the Lord to the next generation, They will come and declare His righteousness to a people who will be born, That He has done this.
Psalms 22:27‭-‬28‭, ‬30‭-‬31 NKJV”

The expectation of the Lord is that we share our faith and experiences we have in His presence. Cross generational fellowship and ministry is a major component of a healthy church, and a model of the Kingdom of God. His expectation is that we learn to submit ourselves to one another honorably, in His love, so we can all grow in the knowledge of God the Father and the Lord Jesus Christ.

“Therefore do not be unwise, but understand what the will of the Lord is… giving thanks always for all things to God the Father in the name of our Lord Jesus Christ, submitting to one another in the fear of God. Ephesians 5:17‭, ‬20‭-‬21 NKJV”

The fear of God is simply defined as an awe and wonder of Him that causes us to revere Him with the greatest level of honor. We honor Him by submitting to each other regardless of age or socio- economic status. Just like a race team in the pits on race night, everyone on the team has something of value to contribute and age is not a factor. When each one does their best for the sake of the team the whole team succeeds.

In God’s Kingdom, when we honor each other and submit to each other’s experiences with Him we grow in our knowledge of God’s nature. No two of us have had identical experiences with the Lord. He touches people’s lives however He sees fit. By comparing notes, and submitting to another’s experiences in Christ, we all benefit. We should never disassociate from anyone because age, inexperience, experience, or stature in life. When you intentionally relate to one another, you are fulfilling God’s purpose of perpetuating faith in Him across the generations.

I’m looking forward to seeing you at the races. If you’d like to drop us a line or have a need we can assist you with we can be reached by email at flchaplain@windstream.net, or on Facebook at Finish Line Chaplain.