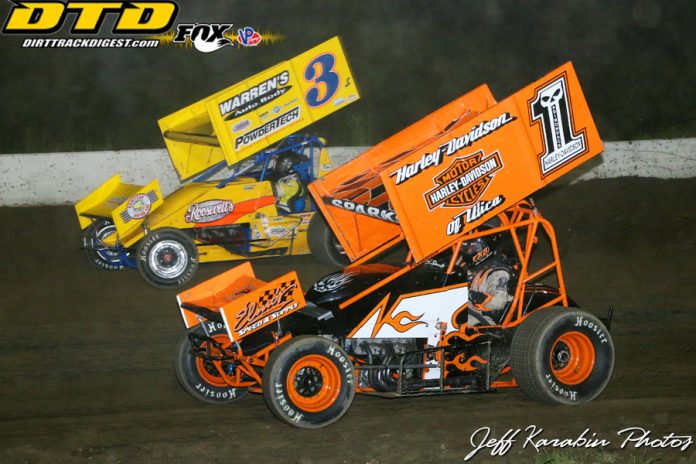 FULTONVILLE, NY – Sunday night the SuperGen Products with Champion Power Equipment CRSA Sprint Car Series returned to the track that they once called their home track – the Glen Ridge Motorsports Park. When all was said and done Cory Sparks pulled into victory lane while another veteran area racer had his night end in heartbreak.

The race was run under heavy threats of rain following numerous afternoon showers. The track crew at Glen Ridge worked hard and did an outstanding job getting the surface back into shape and race ready.

Vermont’s John Scarborough and Canandaigua’s Alysha Bay led the field down to Joey Kriss’s green flag with Scarborough taking the early lead. Scarborough would lead mostly unchallenged for most of the race. Bay meanwhile settled into the second position with Sparks eventually making his way into third.

Bay, whose father Darryl Ruggles has one win at Glen Ridge with the CRSA, was looking strong in second until just past half-way when she spun in turn two. She would rebound to finish tenth. Ruggles meanwhile would wreck early and finish 14th.

Scarborough would lead when racing resumed and again pull away. His night would come to an end on lap 23 when he detonated an engine, coming to a stop while trying to exit the track. This handed the lead to Sparks.

The 2019 SuperGen Products with Champion Power Equipment CRSA Sprint Car Series is back in action at the Afton Motorsports Park on Friday July 12th.