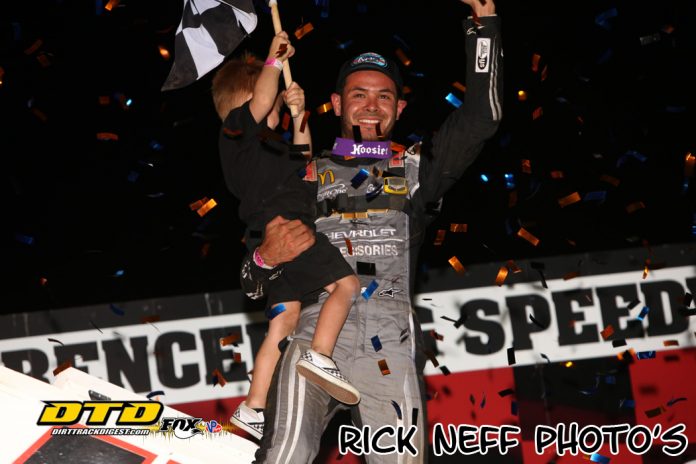 FAIRBURY, IL – Your heart tried to explode. If you stopped to think you’d realize you weren’t breathing. But there was no time for that. Every lap, every corner, the potential for a new leader. A new reason to not blink.

James McFadden? Brad Sweet? Kyle Larson? Your mind spun with the question of who will win, unable to find a clear answer as the three drivers dueled with the intensity of gladiators fighting to be the last man standing.

Then the dust settled. A moment of quiet ease spread around the quarter-mile Fairbury Speedway arena. Climbing atop the wing of his No. 57 machine to thunderous applause and an explosion of confetti was Larson – claiming his eighth World of Outlaws NOS Energy Drink Sprint Car Series win Tuesday night.

The win gives him back-to-back World of Outlaws victories, after winning his last Series race at Lawrenceburg Speedway on Memorial Day.

“Cool to get a win back-to-back with the Outlaws, I’ve never done that before,” Larson said.


The last time he won more than one World of Outlaws race in a season was back in 2013 – a year before he went full-time NASCAR Cup Series racing.

Larson had to duel with fellow NASCAR competitor Christopher Bell and 10-time Series champion Donny Schatz to claim the win at Lawrenceburg. This time around, he had to face the dominate Kasey Kahne Racing duo of McFadden and Sweet.

The KKR teammates started the FVP Platinum Battery Showdown event going first and second in practice with Sweet pacing the field. The No. 49 car then backed up its speed in Qualifying by setting Quick Time. McFadden was third. Larson seventh.

McFadden came back with force, charging to the win in the DIRTVision Fast Pass Dash. Sweet finished third, and Larson sixth – setting their starting position for the 40-lap Feature.

McFadden wrestled with his 900hp machine, taming it like a wild stallion at the start of the Feature to take the early lead. His run was cut short by a red flag on the first lap for Dylan Tuxhorn rolling over in turn one.

When the Feature went back green, heart rates amplified. Breaths were held. McFadden led, but Sweet was charging for a fight.

The two teammates traded lanes lap after lap, corner after corner. Sweet could power his way to either the inside or outside of the orange No. 9 car into the turn, but McFadden could launch off the exit with the power of the gods.

While they dueled, Larson slayed the competition between him and the leaders with ease. By Lap 13, he gave the KKR duo something else to fear. Going into turn three he forced his car under Sweet, making it a three-wide battle through the corner – a common theme throughout the next several laps.

Sweet built up a strong enough run to steal the lead from McFadden on Lap 17. He couldn’t shake him, though. McFadden and Larson stayed on his bumper and the next time around they both snuck by him. McFadden threw his car low in turn three, while Larson squeezed his car between the outside of Sweet and the wall.

McFadden reclaimed the lead and now had a fierce Larson to contend with. The next lap, back in turns three and four, McFadden, again, went low and Larson high. The god-like launches McFadden could get exiting a corner were no match for the resilient throttle hungry Larson.

The two traded the lead for the next couple of laps with Larson eventually prevailing. McFadden still had fight left in him, though. And not far behind was Sweet, lurking. Waiting for another opportunity to strike.

In the closing laps, with the leaders having to navigate lap traffic, Larson couldn’t lose McFadden. The Australian was building momentum lap after lap, inching closer and closer to Larson. But then, with eight laps to go, McFadden’s battle came to an end.

While stuck behind a lap car through turns one and two, McFadden hit the corner tire and spun to a stop.

“Really fun race track,” said McFadden, still with a smile, after the Feature. “It was awesome racing with Brad and Kyle. They’re obviously a couple of the best guys in the country. I don’t know if I just misjudged the lap car. He got the tractor tire I think and slowed him a bunch. I just got into the back of him and when I did that, the tractor tire came out, after he hit it, and I got it and that was that. At the end of the day, it was a positive step for the team.”

In the remaining eight laps, Larson now had to contest with a hard charging Sweet.

Larson stuck to the bottom of the track – the least likely place for him to make a mistake, he said. Sweet took advantage of that, soaring around the outside of the speedway to find as much grip as he could to catch the white No. 57 Silva Motorsports car.

Coming to the checkered flag, Larson faltered. He slid off turn four, scrubbing speed and allowing Sweet the opportunity to strike one final time.

The distance between the leaders was still too much for Sweet, though. Like a warrior on a steed signifying his victory, Larson sprinted to the checkered flag with his front two wheels off the ground.

“That was just an exciting race from start to finish for me,” Larson said. “Shoot, 40 laps around this place was crazy. It felt like we swapped the lead a lot. Just an awesome race track. Short tracks are always a blast.”

Sweet’s runner-up finish helped him cut into Schatz’s points – now only 38 points behind the reigning champion. He said he felt like he had the better car, but probably got too timid in lap traffic, compared to Larson’s maneuvers.

Larson would agree with Sweet’s sentiment.

“I’m always all out,” Larson said. “I don’t even know how I would be if I was running for points with the Outlaws. It would be hard for me to change my driving style. I’m just crazy, yeah.”

That craziness makes speed though, he added.

The kind of speed that made your heart explode with excitement. Your breath run and hide. And your mind spin with questions. But there was no time to worry about that. Because every corner, every lap, there was the potential for a new leader. A new reason not to blink.

The World of Outlaws will next trek to the Northwest on Friday, June 7, to River Cities Speedway in Grand Forks, N.D.