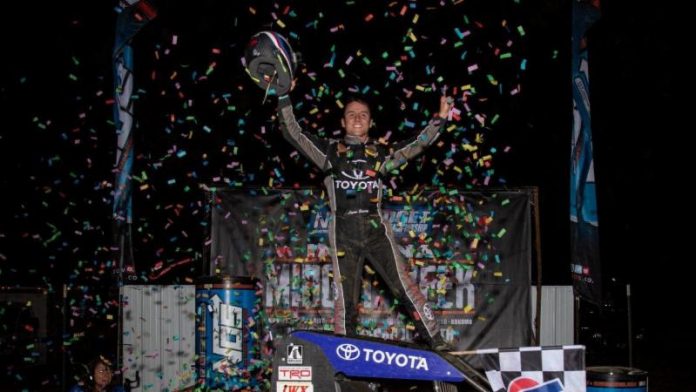 MONTPELIER, IN – He had to wait until the month of June, but Logan Seavey returned to the championship form he used to win last year’s USAC NOS Energy Drink National Midget title when he arrived at Montpelier Motor Speedway Tuesday night for the “Indiana Midget Week” opener.

It became readily apparent following an incident during his heat race that forced him to restart from the tail. From there, he carved his way through the field to win on a last lap, corner pass. The thread continued into the feature where he had to slide by Zeb Wise not once, but twice, after a yellow forced him into ‘Take Two.’

Seavey got to the front on the seventh lap and never surrendered despite having to wade through heavy traffic on a tricky track surface with a swarm of hungry drivers behind him seeking the same promised land for their first time in 2019.

The Sutter, Calif. native drove to his fourth career USAC win along with his first “Indiana Midget Week” triumph just one race after he finally broke through for his first top-five of the season, a second place run in Granite City, Ill. that, in a sense, foreshadowed what was to come at Montpelier after a rough start to his Sophomore USAC season.


“It’s been a frustrating start to the year,” Seavey admitted. “Really, ever since (roommate and crew chief) Connor (Ridge) and I have been working together, we’ve just been on kill every time we’re at the racetrack. He’s really good about that. We just feed off each other’s energy and it just makes it a lot of fun to go racing with someone like that. We’re just having fun right now, and every time I have fun, I normally run up front. So, it’s a good feeling.”

Seavey started the 30-lapper from the pole but was beat to the punch in turn one by outside front row starter Wise. Fourth-starting Tanner Thorson, making his first appearance since February after sustaining serious injuries in a highway crash, put in a bid below Seavey for second on the back straightaway, but Seavey was able to clear Thorson by turn three where the high line was the chosen path and track position was imperative right from the get-go.

“It was really tricky out there,” Seavey recalled. “I think we all knew the rubber was coming, but just didn’t know when. When Zeb beat me on the start, I was kind of surprised, but it was still just a little bit greasy on the bottom. He got a really good start and I was just tracking him from there. I knew our car was a little bit better and I just knew I had to make my move at the right time and not give him any second chances. But, as soon as I did, the yellow came out. That wasn’t what we were planning for.”

When Thomas Meseraull slowed to a stop atop turn four on the fifth lap, it came just a tick after Seavey used a monster slider to clear Wise for the lead between turns one and two. The resulting yellow negated the move and positioned Seavey behind Wise for the ensuing restart, thus forcing him to re-rack and try the move once more.

Seavey stayed right with Wise for the two laps following the restart and was right on his bumper as the two crossed the stripe. Seavey threw it down to the infield tires in turn one and slid up in front of Wise in turn two before driving away to distance himself from Wise by more than a second at the halfway mark as he split his way through lapped traffic.

“Once we were able to get back by him again, not too long after that, the rubber came like we were kind of expecting,” Seavey remembered. “I was trying to take it easy on the tires. If you run too hard with these things, you can blow the tires right off it. After that, I had to take it easy, try to be smart in lapped traffic and not allow myself to lose the race. The rubber’s always tricky, and you never really know what’s going on behind you. You just have to run your own race.”

Truth is, there was a lot going on behind him, with Wise and a rapidly closing Thorson trying to take advantage of any misstep Seavey might make through traffic as they remained on the rail up top and Seavey dipped down off the line to dispose of the lappers.

“It’s tough to decide when you want to do it and when you can time it right,” Seavey explained. “The first five, six lapped cars were easy to get by. The track hadn’t completely laid rubber yet. When it locked down, that made it really tough. I tried to pull out of line three or four times to get by, which made me kind of rethink my moves. Every time I did that, I probably lost half a second. Do you stay in line and follow them or try to get another car in between you and second place? These are the decisions you have to make. Sometimes you make the wrong ones, but, luckily, everything went smooth tonight.”

It did for him, although when Thorson slid by Wise for second with five laps remaining, he was running a tick quicker than Seavey, but Seavey made all the right moves through traffic down the stretch to notch his first victory of the year over Thorson, Wise, point leader Tyler Courtney and Dillon Welch.