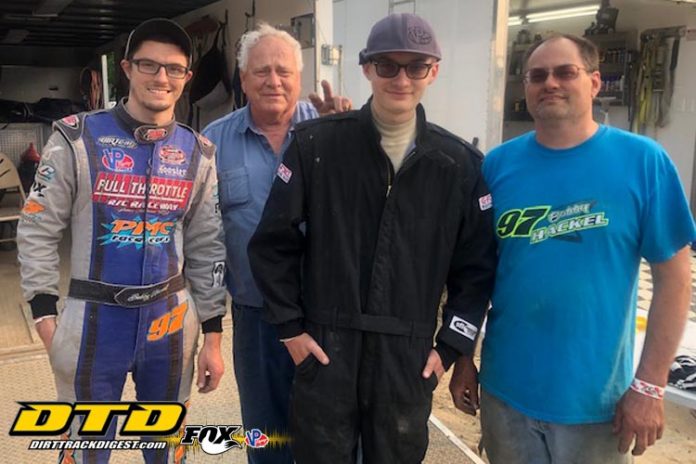 With the number of years we’ve been involved in racing, either as fans or as writers, we know the names like Tremont, Johnson and Flach that have been around many years in our sport. One name that has been around since the end of the 1940s is Hackel. It all started with Bob, Sr., who drove jalopies from 1949-53 and when he gave up driving he still owned race cars and had names like “Lucky” Lee Palmer and Joe Messina drive for him. These two drivers drove predominately at the Rhinebeck Raceway at the Dutchess County Fairgrounds where they split nine, second place finishes between them. Bob, Jr., was next in the 1970s becoming famous in the Northeast for his racing prowess in the Mini Stocks. Bob, Jr., amassed over 50 wins at Lebanon Valley alone. Bob also won at a small 3/4 mile track inside Pocono Raceway in Pennsylvania. Bob the III was next to get behind the wheel racing for a number of years in the Sportsman and Modified classes in and around the Capital District. He was followed by Bob Hackel, IV now racing at Albany-Saratoga and Devil’s Bowl on a regular basis this season. Bobby, IV’s brother Brett is just a few weeks into driving in the Limited Sportsman class at Albany Saratoga and is just getting the feel for the open wheel racers. Brett’s car is a former Steve Hough racer with an $1100 engine, with parts from five different older race cars. On the hood is “thanks Gramps, for the motor.”

Friday at Albany-Saratoga we stopped in the Hackel pit area to discuss their season thus far. Bobby, IV had an impressive start to his season when he traveled to Florida to race a Sportsman at North Florida Speedway during Speed Weeks in February. In three events he had a win, and second and a third on his first ever visit to the track in Lake City, Florida. Last week he started his season at Devil’s Bowl Speedway in Vermont with a win in the King of Dirt Crate Modified Series. We look for the Hackel name to remain in racing for many more years. Johnny Bruno, No. 22, third generation driver is quickly learning the route around Albany Saratoga-Speedway. In the short time he has been behind the wheel he looks more and more comfortable each week. His crew chief is a longtime racer, now promoter and Johnny calls him dad; Mike Bruno. Mike is learning how to make adjustment from the sidelines, something that is very new to him. Johnny’s smooth driving style earned him a win in his Limited Sportsman qualifying heat on Friday. Johnny likes Albany-Saratoga and says he feels good out on the track. Last Sunday, he finished second in the Limited Sportsman feature at Devil’s Bowl. It was N.Y.S.S.C.A. Night at Albany Saratoga on Friday and representatives, Frank and Cheryl were on hand singing up members for the season. N.Y.S.S.C.A. awards money, hats and yearbooks to the highest finishing member in each feature during the night. Frank and Cheryl wanted to thank all those that renewed or became new members on Friday making for a very successful night. With a #Mancini Strong sticker on his car, Modified driver Jimmy Nagle was showing support for drag racer, Tony Mancini of Schenectady who lost his hand in a drag racing crash at a Kentucky Dragway on Memorial Day Weekend. Jimmy wanted Tony to know that the dirt track racing community is supporting him in his time of need. Racing got off to a historic start at Fonda on Saturday as several of the MVVDMS racers were on display outside the Fonda Museum prior to the nights racing. Ed Docskalik was behind the wheel of his former Wink Hinkley No. 27 Late Model. Docskalik went on to race in the nights Vintage Antique Late Model division and was awarded the N.Y.S.S.C.A. Safety Award for the night as the winner in the Vintage Antique Class. Ed received $75, a N.Y.S.S.C.A. hat and yearbook and 50 year pin to celebrate N.Y.S.S.C.A’s 50th Anniversary. C.D. Coville was wandering through the pits at Fonda on Saturday and when we caught him he was with Demetrios Drellos. The two discussed a few racing moves with C. D. giving veteran advice to the up and coming star. We spoke with Demetrios about his trip to Mohawk International on Friday nights and he explained that he loves the track at Mohawk because, for one reason, the way he’s treated. He says that the track has great lighting, seating and track surface. Drellos’s plans to make the 2 hour, 40 minute, trip whenever he can. He’s happy with Fonda this season and the way things are going. Each week since the season started Fonda’s 50/50 has been well over $1000 all thanks to the three young ladies Julie, Dylanne and Heather who walk many steps each week through the pits and stands selling tickets. On Dollar Night the winner went home with over $4000, a record night so far this season. Half of the money goes to the point fund and so far it looks as though, by the end of the season, the benefits will be HUGE!