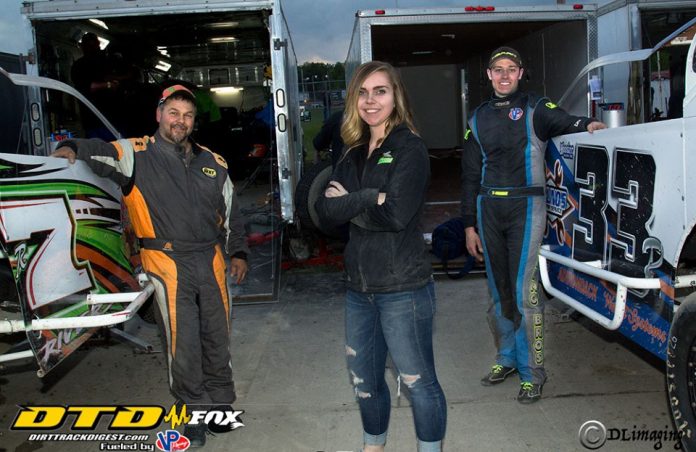 A driver in the position to take the green flag or to even win a race will be partly determined on tires and how well they were set up.

You can have all the power in the world along with a perfectly set up car, but if the tires are not chosen or prepared properly, your chances on getting to victory lane are slim. In the world of dirt track racing, tires experience a variety of different angle pressures as the car travels around the track. From forwarding motion, to turning and in the corners, a more or less yaw motion creating a myriad of different stresses on the tire.


Another synonymous routine with dirt track racing is that cars always travel in a counter-clockwise circular motion, hence the need for tire stagger and tire preparation.

In today’s competitive world of dirt track racing, it’s become more and more common to see one or two members of the crew primarily prepare the tires under the guidance of the crew chief.

Recently I came across Brittany Lucia at Airborne Plattsburg Speedway who prepares all the tires for the Rivers Racing team.

Brittany, who is studying nursing full-time during the day, began helping her uncle Lonnie Rivers, owner of the Rivers Race team, several years ago. As time passed, Lonnie introduced Brittany to tire preparation and things have just grown from there.

The Rivers Racing team, with drivers Lonnie Rivers in the 7R and Travis Bruno in number 33, have put their faith in Brittany as their main tire person. On a weekly basis Brittany prepares a good number of tires for the coming weekend of racing, including spares.

Brittany explained, “We pre-prepped all our tires at the beginning of the year. During each week, we ideally prepare 8-12 tires per week, and order any new tires we may needle after each race. Our spares are already prepped and ready to go if needed”.

The team’s home track is Plattsburgh Airborne Speedway which runs Saturdays, but occasionally the team will venture to other venues when time permits increasing the workload on Brittany as the weekend unfolds. A typical week for Brittany in preparing the tires starts by a good washing on both cars.

Once the track tire pressures are adjusted as per Lonnie’s or Travis’s specks, and after each run, the tires are inspected and may or may not need adjustment, depending on the track conditions or how the tires look and what the driver’s feedback is.

Brittany commented, “We may need to prep the tire after each run, say after hot laps or the heat race. In prepping the tires the grinding and needling have specific directions. The right side is inside out, and left is outside in. The track conditions will dictate how many times we grind or needle — usually one to two times per race night.”

This is a lot of work considering she has two cars in which all the tires must be checked and prepped if needed.

The last job, which is being introduced to Brittany by Lonnie and team driver Travis, is grooving the tires and using the new siping machine. Brittany explained that she is going through the learning process currently and that it’s a lot to take in, but once things are practiced and perfected, she will take on all tire prepping from siping to grooving and finally grinding.

For Brittany, the whole experience has been very enjoyable, and so far this season, the team has two wins under its belt — one from Lonnie and the other by Travis. The team is also sitting very well in the points battle with a fourth and fifth place standing after five events at their home track at Airborne Speedway.

So if you see the number 7r of Lonnie Rivers or the number 33 of Travis Bruno on the track, or even better in victory lane just, remember the tires that got them there were done by Brittany Lucia.