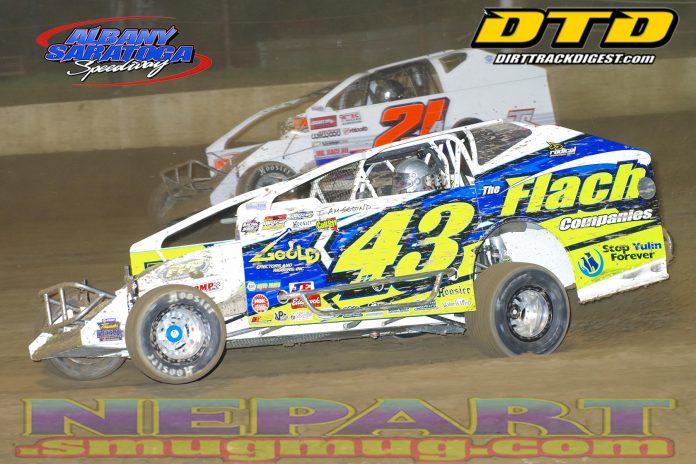 MALTA, NY – Australian import Peter Britten started off his 2019 campaign at the ‘Great Race Place’ in perfect form winning both his heat race and the opening night feature at the famed Malta, N.Y. oval. Since then, however, the driver affectionately known as ‘Batman’ seemingly lost his superhero touch. Until Friday night that is.

Firing from the seventh position on the grid for the Upstate Buick GMC Dealers 35-lap feature, Britten drove his No. 21A Troyer chassis with ease towards the front and by the end of the fifth circuit, the 2017 track champion set sail quickly distancing himself from the rest of the field.

Though it seemed as if the Jake Spraker owned No. 1J driven by Rocky Warner may have had a chance to challenge the leader as he approached lapped traffic by the mid-point of the feature event, Britten was an absolute ace picking off the back markers and even a late-race caution with only five circuits remaining, not a single one of his contemporaries were able to make a charge as Britten went on to pick up his second victory of the 2019 season over invader Ryan Godown.


For Britten, his second victory of 2019 became his 10th career win at the Saratoga County oval which places him 18th on the all-time wins list at the historic facility.

“It’s definitely been a struggle the past few weeks,” Britten stated in victory lane Friday night. “The track is always going to be a little different the first night out and then it’s going to take a few weeks to take a set and we just didn’t keep up with it. People that weren’t good on the first night were good afterwards and we just had to find the right combination.”

After finishing outside of the top-ten the previous three weeks, there was little doubt that a change had to be made in an effort to return to top-form and yet watching the heat races earlier on in the evening, there wasn’t much of an argument for picking Britten to come out on top at the end of the night.

“We were close in the heat tonight but we weren’t quite where we needed to be,” continued Britten. “We made a couple of adjustments and got the car better and better. If you’re smart, every time you go out on the race track you should get faster and faster. We’ve definitely been there before where you make the car go the wrong way but tonight, we unloaded with a good car and we were able to tweak on it; we weren’t searching.”

After making quick work of the top-six drivers in the opening laps, Britten was ready for the race to be over at lap-five given the way his previous three finishes have been. Unfortunately, not every victory is that easy regardless of how effortless it seems.

“Once I got out front, I was ready for it to be done,” He said with a laugh. “But we had the car tight enough to stay on the bottom and I figured nobody was going to drive around me so why leave the bottom open? I felt pretty confident from the opening laps that we had the car to win tonight.”

Lapped traffic also came into play after a steady green-flag run through the middle portion of the 35-lap affair brought the eventual winner to the tail-end of the pack quickly. Though some drivers succumbed to their fate quickly, others put up a fairly spirited fight in hopes of staying on the lead-lap.

“There were a couple of guys that were a little hard,” Britten continued. “I was starting to get to some faster cars with Flach [Keith] and Tremont [Kenny], they’re the ones that are harder to get around. With other guys there’s such a big speed differential that you can just fill a hole and get by them but with the quicker guys, you can’t just get by them; you have to work on them so it’s a little tougher but I seemed to get through alright.”

It never seems to fail that whenever a driver gets to the lead and works up a large advantage that a caution comes out. In the closing laps of Friday night’s feature that managed to occur twice making a seemingly easy Sunday drive more of a marathon than anything.

“There was caution after caution at the end it seemed like,” Britten concluded. “Every caution gives a tire a chance to seal over and you start to wonder who’s coming. It gives the faster guys a chance to catch up. It’s not fun; when you’re in the lead you just want to race to go green to checkers and be the end of it. Fortunately, tonight we had a great car and nobody was able to get to us.”

News and Notes:
Marc Johnson couldn’t catch a break on Friday night; or at least a good one. The water pump broke off the front of his Beddell small-block sending both itself and the radiator fan into the radiator during warm ups. After starting scratch in the third heat race and missing out on a handicap position for the feature, the driver of the No. 3J still managed to finish inside of the top-ten…

Keith Flach looked like a man on a mission riding the outside with his No. 43 on his way to victory in his heat race. The same lane that took him to the front in his qualifier nearly took him into the woods in turn one during the feature as he put his Bicknell chassis on two wheels in turn one and ended up spinning over the bank to bring out a caution early in the event. If it weren’t for bad luck thus far in 2019, he would have no luck at all…

The top-five finishers read like a who’s who of young talent on Friday night. With Ryan Godown leading the charge followed by Jesse Mueller, Bobby Hackel and Rocky Warner, there seems to be a proverbial changing of the guard in process.

Sportsman Notes:
Robert Bublak put all competitors on notice from the onset of the evening as he went from starting dead-last to finishing second in his qualifier out of a field of ten cars. With a season of missed opportunities and bad luck following him from week-to-week, the driver of the No. 27 was able to finally break the ice with a convincing victory in the 30-lap VP Racing Fuels Summer Shootout Series sportsman feature.