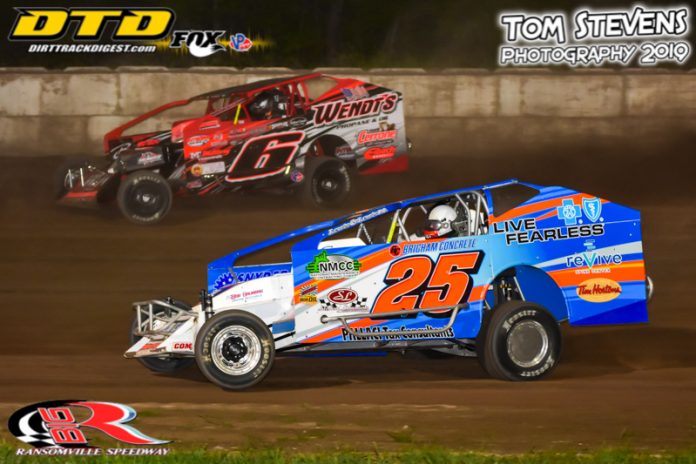 A total of 20 Crate Late Models took the green flag in their first race at the “Big R” since 2016. Wonderling and David Pangrazio shared the front row at the start. While Wonderling took off at the drop of the green flag, Pangrazio did not and held up the outside line. This allowed Canadian Rob Pietz to grab second early on.

The race was held up by nine caution periods, but the action remained intense at the front of the field in between the waving of the yellow flag. Grigsby started sixth, but passed Pietz for second on lap 7. He then went after Wonderling for the lead, and was able to take command of the field on lap 12.

Wonderling and Grigsby got together one lap later, and Wonderling lost control of the car. It turned sideways, and rolled down the banking in turn four. Wonderling dodged an oncoming Jim Johnson, and rolled the car through the infield without stopping. The yellow flag did come out for the incident, but Wonderling only fell back to sixth because he maintained momentum, and blended back into the field.

This gave Grigsby control of the race while Wonderling had to work his way back to the front. He found some bite on the outside lane and used that to his advantage. Wonderling was back up to fourth when the caution came out for the next-to-last time on lap 19. He then drove by Johnson and Sam Pennacchio on the restart to move back into second.


Wonderling then caught Grigsby and drove his nose under the back of Grigsby’s car. The pair then battled side-by-side with Wonderling just edging Grigsby for the lead with two laps to go before the yellow flag waved for the final time on lap 23.

Wonderling drove off on the final restart to complete his comeback and claim the victory. Grigsby settled for second followed by Johnson, Pangrazio and Pennacchio.

A strong field of 24 Krown Undercoating 358 Modifieds were on hand for just their second race of the 2019 season at Ransomville. Jeff McGinnis and Rick Richner started on the front row, while Erick Rudolph had to start 12th due to Ransomville’s lineup procedures. As the winner of the most recent feature in the division, Rudolph had to start at the end of the cars that qualified for the redraw.

McGinnis grabbed the early lead, but handed it off to Ryan Susice after a restart on lap 3. Rudolph wasted little time as he moved from seventh place on lap 3 to third place just three laps later. The red flag was displayed on lap 6 when Tyler Willard rolled his car over after making impact with the wall in turn one. He walked away from the incident.

The trio remained close together on the track as Rudolph finally wrestled second away from Williamson on lap 18. He then tracked down Susice, and made a run underneath him coming out of turn two on lap 24 to take the lead for the first time. Susice tried to regain the spot at the other end of the track, but he hopped the cushion in turn three and scraped the wall.

Rudolph survived a late race restart when Steve Lewis, Jr. brought out the caution with four laps to go. He drove on to pick up his second-straight Ransomville win, and did it in front of his sponsor Blue Cross Blue Shield of WNY. Susice and Williams completed the podium with Chad Brachmann in fourth and Mike Bowman in fifth .

Pete Stefanski started on the pole and led all 20 laps of the Ki-Po Chevrolet Street Stock feature. The race was slowed by only one caution flag as Chris Dziomba tagged the turn three wheel on lap 2. The rest of the race went by without incident with Stefanski dominating the festivities.

Cory Sawyer came from the seventh starting spot to finish second. Jaren Israel placed third followed by Anthony Guthrie and Billy Bleich. Pat Dell ran second for the majority of the race, but hit the wall on the final lap. He suffered a flat right front tire and limped around to finish sixth.

The brand new Ransomville-Genesee Mini Stock Super Series made its first visit of the season to the “Big R”. Ransomville regulars Mike Kramarz and Dave Dussault started on the front row for the 20-lap main event. Reigning Genesee Speedway Mini Stock champ Dante Mancuso quickly moved up to challenge Kramarz at the front of the field.

Kramarz and Mancuso traded the lead back-and-forth for a few laps before Mancuso took it away for good on lap 7. He led the rest of the way while fending off challenges from Chris Leone and Cole Susice. Mancuso picked up the win in the second race of the season for the Mini Stock Super Series followed by Susice, Leone, Ashley Blech and Kramarz.

Butch Zimmerman led all 15 laps of the Stevenson’s Hardware Novice Sportsman feature for his second win of the season. Zimmerman faced a strong challenge from Orval Harris late in the race, but held on to win. Bubby Pawlak, David Fingerlow and Mike Martin rounded out the top five.