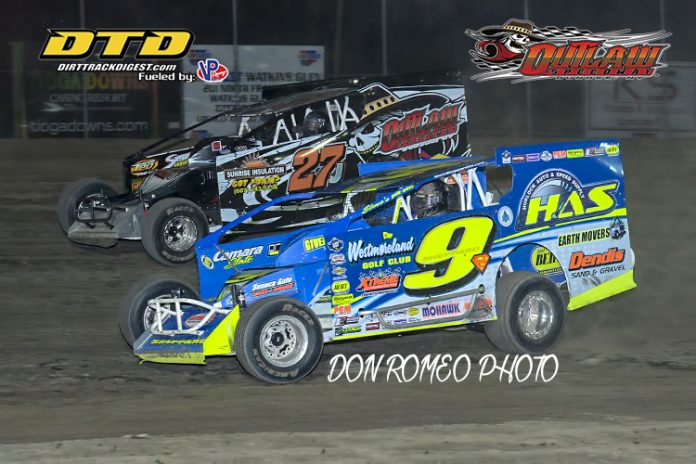 DUNDEE, NY – Jonestown, Pa’s Brock Zearfoss took full advantage of his pole position starting spot in the 30 lap A-Main and topped a stellar field of 410 Sprints as the Tony Stewart Ollies Bargain Outlet All Star Circuit of Champions made their only stop at the Outlaw Speedway in 2019.

Under the best weather conditions thus far in “19” in Upstate NY and playing to a packed house Zearfoss and former World of Outlaw Sprint Car Champion, Dave Blaney brought the 24 car field to the opening green flag. Only a couple of yellow flags slowed the pace as third place starter, Dan Shelther early on and Tony Stewart near the mid- way portion brought out yellow flags with both machines suffering front end damage. Cory Eliason gave Zearfoss fits early on drawing a bead on the race leader on numerous occasions, but as the race wore on Zearfoss found a line on the cushion of the fast 4/10 of a mile clay oval and went on to the big win. Dave Blaney was the real story of the race as just past the half way mark the nose wing on the 98H machine collapsed causing Blaney to have his hands full and with just a few laps to go the wing was just dangling by one bolt. It was masterful driving that found Blaney finishing third behind Zearfoss and Eliason as he made his way to a top three podium finish. Local Pa Posse driver Gerard McIntyre, who now competes full time in the ASCoC Series put on a steady drive to finish fourth as Danny Varin represented the Empire State well by rounding the top five.

In the Friendly Chrysler, Dodge, Jeep Ram Modifieds it took Super Matt Sheppard fourteen laps including a three lap tussle with then race leader, Danny Johnson to move from his 12th starting spot into the lead and from there cruised to his fifth straight win of 2019 and remain undefeated in the class. Sheppard again made his drive to the front look relatively easy, but from second on back all eyes were on a fierce battle between some of the top names in the business. Jim LaRock, who led throughout the opening laps gave way to The Doctor, Danny Johnson near the third way mark of the 30 lap affair. Johnson would hold the top spot for the next several laps as Sheppard would race side by side with both drivers working the high and low lanes to perfection. Just at the half way mark Sheppard put a power move around the outside of The Doctor and went on to his fifth straight feature win at the Yates County oval. Hurricane Steve Paine was able to work by Johnson to nail the runner up spot at the finish with Dangerous Dan the Stock Car Man in third. AJ Slideways, Alan Johnson put on a steady drive to finish fourth with track owner, The Boss Man Tyler Siri rounding the top five finishers.

3 qualifying heat wins went to the brothers Johnson and Sheppard.


The Sunrise Insulation Sportsman were competing in another Outlaw Speedway American Racer Tire Series Event. Brian Fish has found some speed at Outlaw in 2019 and as previous winner this season looked to make his mark in the 7 race American Racer Tire Series. Fish along with pole position starter Doug Kline brought the 24 car field to Nick Fultz opening green flag. Fish stayed right at the fore front throughout the entire distance and would eventually bring home his familiar 27 machine to the win followed across the line by last week’s winner, Tommy Collins Jr. Kenny Hammond has suffered mightily in the early part of the season and started third on the grid and that is just where he finished at the end chased across the line by Stacy Jackson and 2018 Track Champ, Chris Fisher. Dave Marcuccelli, who won the Outlaw Speedway American Racer Tire Series in 2018 could only muster a 9th place finish at the double checkered flags.

Heat wins were claimed by Collins, Fisher and Fish.

In the Stan’s No Tubes Street Stock Division Aksel Jensen put an end to the victory lane dominance by Dylan Cecce and Glen Whritenour as up until tonight the two have completely ruled the class. Jensen, who started inside the second row, picked up a most popular win over Dundee, NY veterans Quinn Sutherland and Carl Cleveland who finished second and third respectfully. Try as they might Cecce and Sutherland could only make it to fourth and fifth place finishes and although the numbers were down a bit the competition in the Stan’s No Tubes Street Stock Class is still some of the best in the region.

Heat wins were claimed by Cecce and Whritenour.

Adam Austin made it three feature wins in a row by once again putting on a driving clinic as the second generation pilot and reining 2018 4 Cylinder Track Champion picked up the popular win. The Addison, NY native started the feature in the fifth row and methodically worked his way to the front and picked up the victory. He was chased across the line by 2019 feature winners Scott Lehman Jr. and Josh Oles. Erica Bell put in a nice performance to finish fourth as 2017 Track Champ, Mike Stone, who appears to have his program back on target after a sluggish 2018 came home fifth.

Heats wins were claimed by Lehman Jr., Austin and Oles

Last but certainly not least the Marion Decker Insurance sponsored Hobby Stock Class took to the speedway and in what has become expected of this class since its inception at Outlaw Speedway a few years ago the competition keeps everyone on the edge of their seats and this event was no exception. At the end of the feature it was a new face finding victory lane as Casey Wagner picked up the win as he was chased across the line by Bruce Kinner, last year’s champ, Marc Minutolo and Aaron Miller. Eric Williams completed the top five.

Heats were claimed by Jamie and Justin Eldredge.

Up next at Outlaw Speedway it will be the Annual Jeff Searles Memorial with Mid-Season Championship Races in all regular classes. Also on the card it will be bicycle give-a-way and the C.O.D. Vintage Cars will take to the track in their only appearance of the season. The night of action sponsored by Cam Sutherland and Sons Construction.