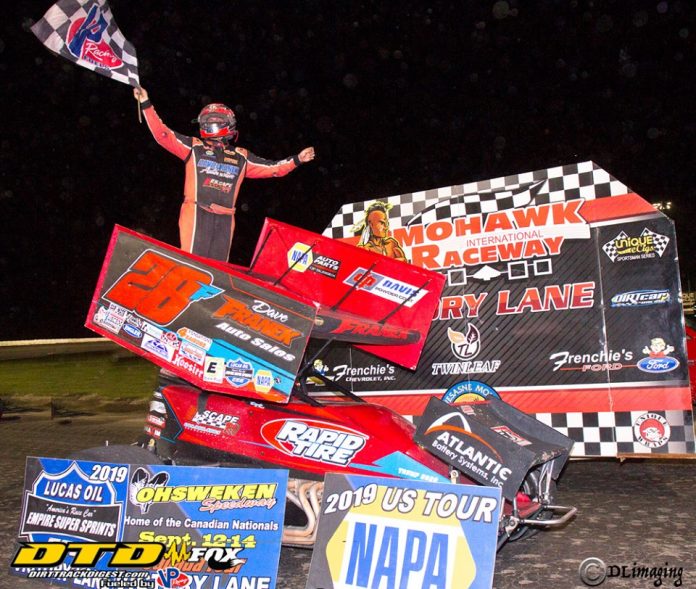 AKWESASNE, NY – Davie Franek will never forget his first ever visit to the Mohawk International Raceway. Friday night the Wantage, N.J., driver got his first look at the half-mile state of the art facility. When it was all over it would be Franek leaving with the biggest check of the evening.

Franek got a great jump at the start of the 25-lap Lucas Oil Empire Super Sprint feature and from there led the entire way to claim the $2,110 win on Friday night. The night’s feature was presented by NAPA Auto Parts, Ohsweken Speedway and Mach 1 Chassis.

“This is awesome to come up here the first time at the track and win,” stated Franek. “It was definitely challenging. I have to thank my guys. Brian did a hell of job. He’s full-time in the race shop, said Franek. “We are doing a lot of racing this year and to be able to strap into one of these things and not have to worry about if the car is together or not means a lot. My old man came up tonight for a change too so it’s nice to have him out on the road with us too.”

Alex Vigneault and Matt Tanner comprised the front row for the start of the A-Main, but it was Franek making the highlight reel pass in turn two. Vigneault went to the bottom, Tanner tried the higher side while Franek went to the very edge of the outside of turn two to get a great run to go from his fourth starting spot to the lead in the opening corner.


“That was the move of the race,” cited Franek. “I knew I had to get where I got in the first 10 laps. I was just fortunate that Matt gave me enough room coming off of turn two. He could have easily come up across me and ran me out of real estate. I have to thank him for that. He definitely could have dirtied me.”

Tanner disposed of Vigenault while trying to keep pace with Franek in the opening circuits of the race. It was to no avail as Franek’s groove on the outside of the speedway allowed him to pull away from the rest of the field.

Franek hit traffic with only six laps showing on the lap counter. His high line was key to allowing him to move through the slower cars at the tail of the field swiftly. Tanner was busy contending with a hard charging Shawn Donath who had worked to his back bumper after starting back in eighth.

Tanner and Donath were busy swapping second as the race reached the halfway point with Franek deciding it was time to alter his line. Franek migrated his way to the very bottom of the track as the inner groove became the faster line on the speedway.

“At the beginning of the feature I was rolling around the top pretty decent,” commented Franek. “I got to lapped traffic and they actually were starting to go back by me so I knew I had to get down. I kind of held my ground. I knew if I kept the pace up I’d be tough to pass.”

The one and only caution of the main came on lap 22 as the point leader coming into the night Jason Barney and Jordan Poirier got together battling for position sending Barney spinning off the track in turn one with a broken frontend.

At the green for the restart Franek picked up right where he left off while Tanner followed him on the bottom of the speedway. Tanner’s was fast allowing him to keep the gap small between them, but when the checkered flag finally fell it was Franek taking the win.

Tanner crossed the line in second. He was disappointed with the outcome as his car kept getting better and better as the race wore on the. The final caution took away his advantage as he was gaining on the leader. As a result the Stephentown, N.Y., pilot had no choice but to settle for second.

“We were shooting to be good at the end and we gave too much away with our tire choice at the beginning, but at the end we were really good,” mentioned Tanner. “That caution at the end didn’t help us there. I think in traffic we had something there for him. We made the right tire choice tonight but Davie stuck it on the first lap and that’s what won it.”

Kyle Moffit got a spectacular jump on the final green flag run allowing him to vault himself into the third spot in the final laps. He fell back early from his third starting position only to rebound late to complete the podium.

“We made the decision right before we went out to run the bottom and get what we could get out of it,” cited Moffit. “I was a little nervous the first couple of laps then all of sudden the car sat down and got rolling.”

Donath completed the A-Main in the fourth spot while Josh Pieniazek was able to finish in position five. A field of 29 sprints were in the pits on a beautiful Friday night.