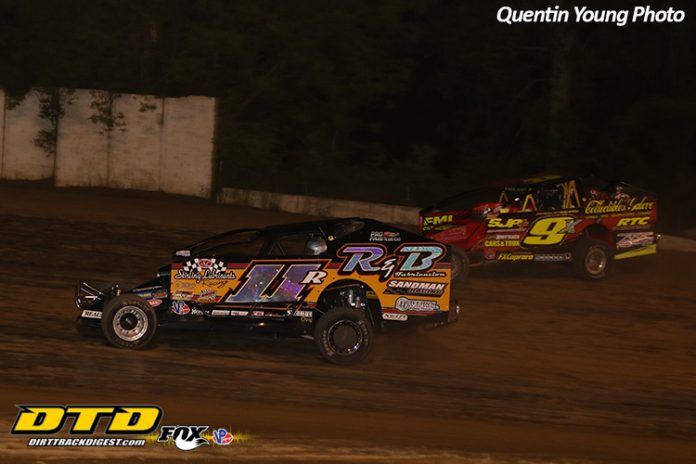 BREWERTON, NY – Rob Bellinger scored a hard-fought trophy in the 35-lap Modified feature event, charging to the front from 9th and holding off a late run by Larry Wight.

“It’s been an awfully long time,” Bellinger said. “We’ve been working on this car for a couple years and I think we finally got it. I ran down Joe a couple of times, and I wound up getting into the back of him entering turn one, but it was tight. We both wanted the same lane on the top, the track was fast, and we were able to get by him. I saw Larry’s nose once, but I didn’t want to change lanes, I didn’t feel good on the bottom and couldn’t keep my momentum up, so it was best for me to stay up top.”

Joe August set the pace in the opening stages of the Modified feature event, pressured early on by Nick Krause in a small block, and then Rob Bellinger. By lap 9, Bellinger had worked past Krause for second and was all over August for the lead. For a number of laps, Bellinger remained right in the tire tracks of August as both drivers railed the cushion, putting some space between them and third place Krause.

On lap 16, Bellinger hopped the cushion and allowed brother-in-law August to briefly slip away. Behind them, Bellinger and August’s other brother-in-law Matt Hulsizer got around Krause for third, while Larry Wight climbed into the top five from 14th. Looking back to the lead, Bellinger rapidly closed the gap on August, trying to slide up in front of August a couple times, but couldn’t get the bite he needed down low or in the middle. On lap 21, Bellinger finally cleared August, returned to the top lane, and took off.


Wight, now fourth, was the lone ranger on the bottom of the racetrack. Crashing the family reunion of the three in-laws at the front of the field, Wight drove under both Hulsizer and August to snag second on lap 22. With a full head of steam down low, Wight chipped away at Bellinger’s lead, drawing to within two carlengths on lap 26. Lapped traffic made sure the gap between the top two was constantly changing, as every time Bellinger was held up a turn, Wight would be held up the next.

With five laps left, Bellinger and Wight had clear track. However, Wight’s run on the bottom had stalled out, and he joined Bellinger at the top for a few circuits. With two to go, Wight made one last charge down low, pulling up to Bellinger’s door in the center of the turns. When the checkered flag flew, it was Rob Bellinger taking his first win at Brewerton since 2014 over Larry Wight, a hard-charging Tim Sears Jr., Matt Hulsizer, and Chris Hile.

The win is Bellinger’s first driving for Ted Barcomb, the duo first competing together at Syracuse in 2014. Utilizing chassis and parts from Barcomb’s employer, Troyer Race Cars, the pair have developed a car with different stuff under it than any other in the field.