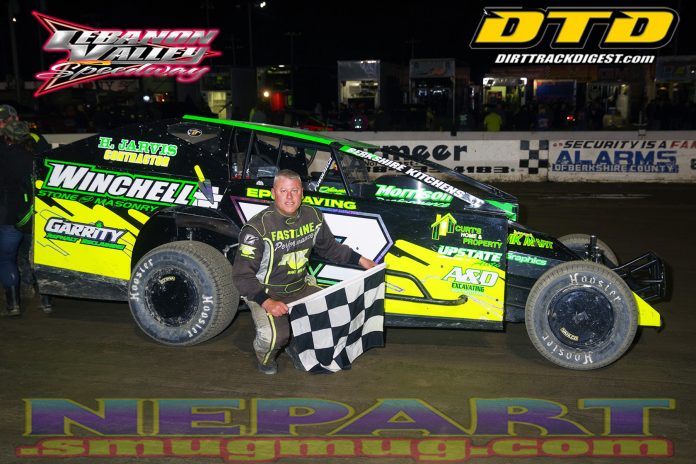 WEST LEBANON, NY – Saturday night was a very busy evening with nine different features running, including three features delayed from June 1st. It was taxing to say the least.

In the opening Modified feature, Paul Gilardi started from the pole and led early. Despite the race occurring early on the schedule, the track was very slick and could catch some drivers out. Josh Marcus found this out the hard way when he spun and backed into the wall to bring out a yellow.

On the restart, Olden Dwyer was able to snatch the lead away from Gilardi and opened up a small lead. Meanwhile, Andy Bachetti was on the move, climbing from 12th to third.

After another yellow, Bachetti ran down Dwyer for the lead and snatched it on lap 16. Despite having one of the fastest cars, he had to deal with Keith Flach in the closing laps. Both drivers were all over the bottom lane, but Bachetti was able to hold on for the win. Flach was second, then Dwyer, Kyle Armstrong and Ronnie Johnson.

The regular feature was a special one, the J.C. Flach Memorial. $5000 was on the line and Brett Hearn was back for more action.


Steve Hough started from the pole and led early. A difficult night for Brian Berger continued as he slid into the wall on the first lap. From here on in, the race ran caution free.

While Hough held off the likes of J.R. Heffner and Kyle Sheldon, Hearn was moving up the order from 15th. For much of the event, the race was a four-man duel between Hough, Heffner, Kyle Sheldon and Kolby Schroder.

In the closing laps, the quartet became a septet as Hearn, Bachetti and Keith Flach entered the picture. Hearn was able to make a series of passes and get himself up to second with three laps to go. However, he could not prevent Hough from taking his first win of the year.

Hearn ended up second, followed by Heffner. Bachetti made a late charge to get to fourth, while Flach was fifth. Kyle Sheldon slipped with a couple of laps to go and dropped to sixth.

The Small Block Modifieds had two features of their own Saturday night. In the first 24-lap race, Alan Houghtaling started from the pole, but came under early pressure from rookie Chris Curtis. After pressuring the veteran for a couple of laps, Curtis was able to take the advantage on lap 5.

Guy Sheldon made a late charge to finish second, followed by Heffner and Frank Harper. Brett Haas was fifth.

The second feature saw Houghtaling on pole once again, but this time, it was Timothy Davis who came to the front. Davis snatched the advantage on lap 4 and pulled away. Guy Sheldon was once again very strong in the race and was able to match Davis’ pace.

Davis had spent the whole race running the high line, but chose to go down low late to defend. The No. 7T couldn’t stick down there, which allowed Guy Sheldon the chance to sneak on the inside on the final lap. From there, he held on for the win. Davis was second, followed by Brandon Pitcher, Heffner and Hough.

Much of the race was a clean fight between LaRochelle and Rob Yetman. LaRochelle was able to hold off the pack to take his second win of the year. Chad Jeseo was second, then Jason Casey, Yetman and Rick Dempsey.

The second feature saw Johnny Rivers Jr. lead the first 12 laps from the pole. Jeseo was able to run Rivers down and take the advantage away with Yetman close behind.

Once out front, Jeseo and Yetman gapped the rest of the field and battled it out for the win. The racing was close between the two past champions, but Jeseo was able to hold off Yetman for his first Pro Stock win since 2012. Yetman was second, then Jay Casey, Nick Hilt and Jason Meltz